Before Dylan Breese dedicated a large part of his life to creating a sanctuary for Ybor's most vulnerable chickens, he fostered baby elephants in Nairobi, Kenya.

He visited the elephants through virtual meetings until 2016, when he made the journey to Africa to see them in person. The time he spent with the elephants changed his relationship with the animal world forever.

When he returned to Tampa, he looked around his own neighborhood and saw chickens in need. That year, he started the Ybor Chickens Society to look out for what he calls his "baby elephants" of Ybor, which came to Tampa with Cuban migrants over 100 years ago.

Employees at a coffee shop near Centennial Park, where many feral chickens gather, heard about Breese's efforts. In May of 2016, they found a chicken with a leg that was twisted the wrong way. The chicken, who was left behind by her family because she couldn't keep up, needed extra help, so Breese took her to his condo. He named her Coffee Bean, because she was found at the coffee shop, and she was as small as a bean.

Coffee Bean lived with him for six weeks, wearing chicken diapers around the house, living in a rabbit hutch and squawking out of jealousy when Breese sat next to someone else on the couch—until a vet told Breese her leg couldn't be fixed. But the bond established was so deep that he knew he had to continue to care for Coffee Bean.

The relationship with Coffee Bean set his life on a new course. Since 2016, Breese has taken rescue calls in Ybor and even a couple in Seminole Heights, climbed trees in the rain to help stuck chickens, learned the art of rescuing baby chicks who fall in storm drains, and has spent countless hours nursing vulnerable Ybor chickens back to health. He went vegan. He moved out of his condo to a house with a backyard in Ybor, where he founded the Ybor Misfits Microsanctuary, a 501c3 nonprofit dedicated to rescuing chickens, in 2020. But he and his partners at the sanctuary needed more space to do their life saving work.

Last month, it happened. The sanctuary found a new home near the historic J.C. Newman Cigar Company in Ybor, who offered to lease them 6,000 square feet of empty lots for a "great price", Breese said. The Newman family also set a matching donation of $4,000 to help the sanctuary get all the supplies they need, build fences and large cages, or "runs", and tiny houses, or "hutches", where the injured chickens find safety from their natural predators: hawks, raccoons and possums. 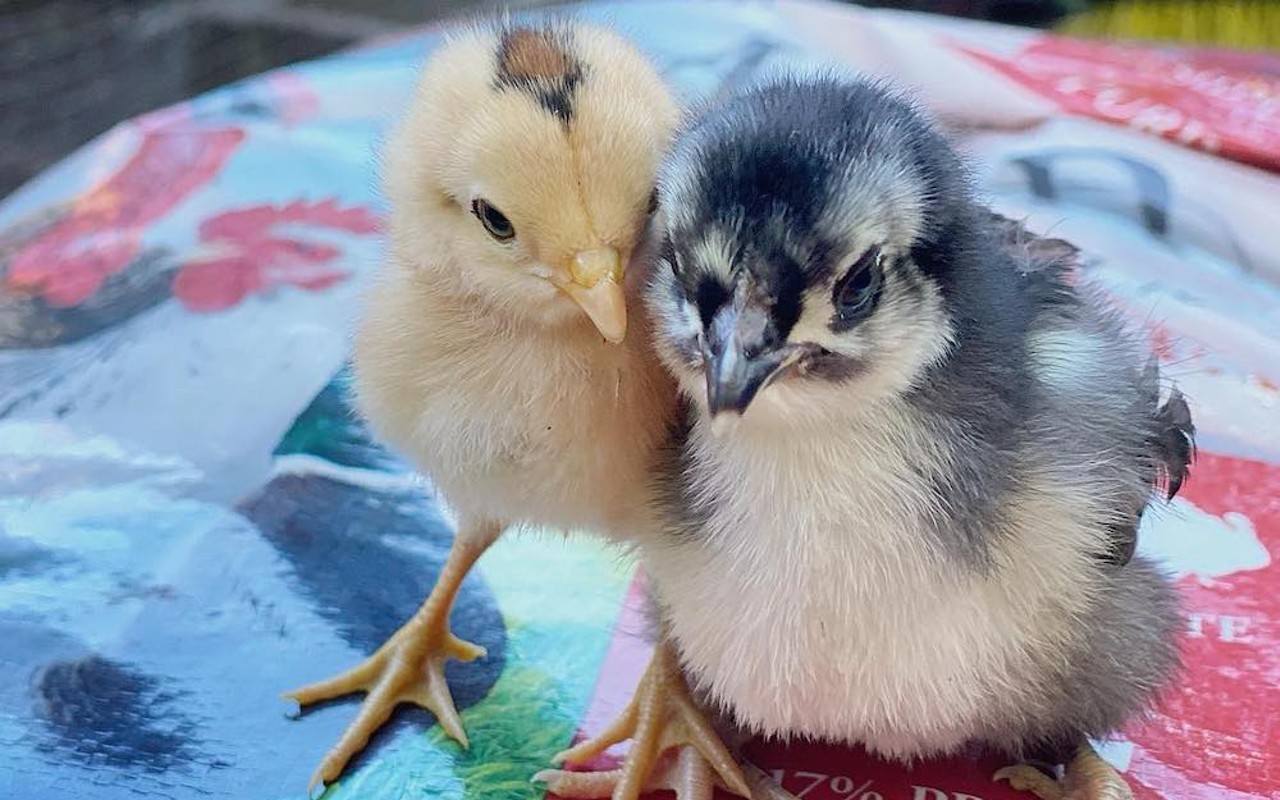 Chicken-saving Ybor Misfits Microsanctuary announces new headquarters: The sanctuary hopes to have the new location in full swing before the end of next year


Drew Newman, fourth generation owner and general counsel for J.C. Newman, said that the family—whose factory is 111-years-old—is working hard to restore parts of Ybor City that have been lost over the years, and that the chickens are integral to the "cultural fabric" of the city.

"When we heard the sanctuary was taking care of sick and injured birds, we wanted to do everything we could to support them," Newman told CL.

On top of the help it's already offered, the company is starting a line of Ybor Misfits-themed memorabilia, including coffee mugs, shirts and posters. Newman says the line should be available for purchase sometime this month, and all proceeds will go to the sanctuary.

Ivan Rivera, a real estate agent and co-president of the V.M. Ybor Neighborhood Association helped link Breese with the Newman family after meeting Breese through his efforts to preserve a part of Ybor's history.

"The birds are not only a mascot for the city of Tampa, they're part of what makes Ybor City special," Rivera said. "With the work Dylan and I do in the neighborhood, and the work the Newman family does, it was really a no brainer for us to team up on this. We hope this new location will be there for a long time."

Florida Senator Janet Cruz has also offered early support for the sanctuary via a letter to Tampa city council, writing that the sanctuary is, "dedicated to providing care and rehabilitation" of Ybor City's feral and abandoned chickens.

Breese has talked to five city councilmen who have all shown their support for the sanctuary's expansion, including Councilchair Orlando Gudes, who represents District 5, where the sanctuary resides. Gudes echoed the sentiment that chickens are a part of the culture of Ybor, and told CL that he has had no complaints from constituents about the chickens lately.

Gudes was on council in 2018, when a few people complained to the city about noise and mess from the chickens, but the majority of Ybor citizens were in support of the birds, and city council upheld the Chicken Sanctuary Law that helps protect them.

Breese and his girlfriend Anahy Gutierrez spent a large part of their Christmas and New Year holiday vacation putting in the hard work of getting the new spot going. Gutierrez grew up in awe of the chickens in Ybor, and wondered if anyone was taking care of them. Years later, she met Breese when they were co-workers in 2019. Their mutual love for the chickens brought them closer together, and then, romance sparked. Now, they're  living together in a house neighboring the sanctuary that they purchased separately, and doing hard work on top of their regular day jobs to expand the sanctuary.

Gutierrez' uncle helped them build a fence at the new space and four new chicken runs have been installed, along with a couple of storage sheds. It's just the beginning of a project that Breese, Gutierrez and their nonprofit partner Nayeli Robledo, aim to have completely finished by the end of this year. They currently dedicate about 30 hours a week to the sanctuary between the three of them.

But because they run a microsanctuary, Ybor Misfits won't aim to assist more than the "handfuls" of chickens they help right now, Breese said. They want to continue to be there for the most vulnerable chickens in Ybor, while making the new location a place of learning and exchange.

The team hopes it will be a cultural and interactive space, where people can show up to learn about the chickens, volunteer, and adopt them. Their hope is that more education will help avoid future abuse of their feathered friends.

Ignorance about the animals leads to rampant cruelty. People buy them as pets, don't realize the effort that goes into taking care of them, then abandon them on the street. They raise them to fight ,and of course, for meat. People illegally drop off chickens who, unlike feral chickens, have no idea how to survive in the wild. Despite the risk of $1,000 fine potential jail time, people still abandon the chickens, and set them up for a gruesome death.

From news reports in recent years, it's been estimated that there are anywhere from 29 to more than 100 chickens in Ybor, but Breese says that it's not entirely accurate to try to estimate, because the population changes so rapidly due to deaths and births.

And even though the sanctuary has a majority success stories—including saving 15 birds at once from a respiratory illness in 2020—survival of the abandoned birds after they are rescued is not a guarantee.

Chickens, whose average lifespan is 10-12 years, can die early for many reasons, from disease to predators. And just like humans, they are especially prone to death when they are hurt and exploited. Violet, a "meat bird", who was unhealthy from being raised for food and then abandoned, died of a heart attack after the sanctuary pulled her in from the streets.

"I'm still heartbroken over her," Gutierrez said, tears welling up in her eyes. "There are some that you just get extra attached to."

Coffee Bean, Breese's first rescue, passed away after she caught avian pox in July of 2020. In her honor, her image was made into the logo for the sanctuary.

Yet for every death, there are more stories of a second chance at life.

Dolly was found ravaged by a predator in an Ybor city parking garage. Her face was so swollen that when they rescued her, they couldn't tell she was missing her right eye.  Feathers were ripped off on both sides of her body and she was covered in blood.

"We honestly didn't know what was going to happen, if we could save her," Breese said.

Four months later and Dolly is healthy and productive, helping to raise baby chicks. In December, she won the sanctuary's "Golden Cobbie" (an award for chickens who stand out from the crowd) for "greatest comeback."

The community has noticed their inspiring work, and some have decided to get involved. The sanctuary now has 42 monthly donors who support Ybor Misfits through a Patreon, as well as one-time donors. The supporters get perks, like first access to info about the sanctuary and visits.

But more than money, the sanctuary has fostered awareness of the importance of the chickens throughout the area, an effort Breese and Gutierrez hope to help flourish from their new location.

Breese tells a story of being on a rescue recently. He approached a chicken near a parking lot in Ybor and began inspecting it. Workers at a nearby restaurant shouted at him, unaware of who he is.

"Hey, don't mess with the chickens," one of the workers said. "They're protected!"