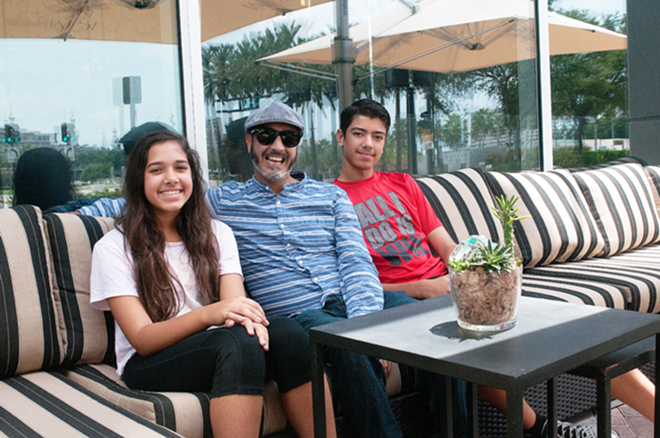 
Bar consultant and restaurateur Ro Patel began his 22-year career in his hometown of London during the mid-’90s at the dawn of cocktail culture. After being made a head bartender at Dick’s Bar at the Atlantic Bar & Grill, which carried the mark of bar guru Dick Bradsell, Ro’s mentors encouraged him to travel and explore food and drink, which he did for five years, working with various bartenders and experiencing different cultures before tapping into the consulting world. Inspired by the Gulf Coast after a holiday on Anna Maria Island, Ro, his two children — Sachi, now 11, and Kiran, 13 — and their mom settled in the region at the turn of the recession in 2007. While there weren’t many opportunities for bartenders seeking a “cocktail bar environment,” possibilities for restaurateurs opened up, and Ro was presented with the chance to launch Ciro’s Speakeasy, his SoHo partnership with Gordon Davis. Ro went on to consult on restaurant concepts around the state (Grill One Sixteen, The Getaway and Sarasota’s State Street, to name a few), and his local involvements now include downtown Tampa’s Anise Global Gastrobar, where he was invited by principal partners Xuan and Kevin Hurt to come aboard, and, most recently, Station House in St. Petersburg. Though consultancy is what pays the bills, Ro is developing “something quite large right now.” He couldn’t discuss the project in detail but says it will likely expand from Tampa to St. Pete. Sachi and Kiran, who contributed to our interview, walk a ton when hanging with their dad, a non-driver who’s a frequent Uber- and Lyft-er. If Kiran’s off playing basketball, Sachi and Ro relax for hours at Oxford Exchange while drinking tea, and when Sachi’s occupied, Ro and Kiran devour half a pound of chicken at places like (the now-defunct) Pollo Garden.

Favorite spot for a breakfast smorgasbord: ELLA’S AMERICANA FOLK ART CAFE. Ro: “It’s crucial, though, to get there 20 minutes before they open.” Sachi: “We realized there’s like an hour waiting list if we got there 10 minutes late.”
Tastiest place to have a good laugh: CHARLEY’S STEAKHOUSE. Ro: “We’ve been there more than a few times. Charley’s is really fun because I know the bartenders there, and there’s a lot of banter. We laugh at my expense in front of my children. The children seem to like that.”
Best beverage sanctuary: MISE EN PLACE. Ro: “I’ve been going there for years. I guess from the outside it’s considered very fine dining, which obviously has a high standard, but the bar scene is very lively. The staff is extremely knowledgeable. I never have to pick up a menu. I always say, ‘Hey, what should I try this evening?’ There’s a little back and forth before they pour me the perfect cocktail.”
Best foodie secret: MATOI SUSHI. Kiran: “It has some of the best sushi I’ve had in Tampa, and not a lot of people have heard about it. Ro: “Great Korean food. And you always find lots of chefs buying their to-go food. I see a lot of chefs on their day off go there and buy a ton of food for their families. That’s a good sign.”
Best reason to unwind locally: LOEWS DON CESAR HOTEL. Ro: “We splurge. We spoil ourselves. [Sachi] likes the spa. [Kiran] and I will hang out at the beach. We’ll get a cabana, and we’ll just chill out for the whole day.”
Best way to get your sweat on: HARBOUR ISLAND ATHLETIC CLUB. Kiran: “It’s a really nice facility. They’ve got a [basketball] court, an exercise facility, a pool.”
Favorite bartenders’ hangout (Tampa): THE HUB. Ro: “Where you’ll definitely find all of us congregate by the end of the evening.”
Favorite bartenders’ hangout (St. Pete): THE BENDS. Ro: “It’s one of those ones that people probably go to on their day off more than after their shift. That’s a real cool little hangout. It’s got a lot of pros. It’s got Tom Selleck on the wall. You can’t beat that.”
Best place for paddleboard enthusiasts: INTRACOASTAL WATERWAY. Kiran: “You can paddle board anywhere. The water’s really calm.”
Best spot for niche ingredients: OCEANIC SUPERMARKET. Ro: “For the unusual, esoteric stuff we’ll go to the Asian market on Franklin. Oceanic is a really good store for us to buy fruits and sugars.”
Favorite place to peruse: OXFORD EXCHANGE. Sachi: “I actually really like the front of Oxford Exchange. It has cool books and old typewriters.”
Best place to score liquor: AMERICAN SPIRITS. Ro: “Right downtown. They just have a really good handle on what people want, both stocking their normal house bars but also what bartenders might enjoy picking out. They have a whole slew of St. Pete Distillery’s booze, which is brilliant.”
Favorite spot for frozen sweets: BO’S. Sachi: “They only have soft-serve ice cream, and then they have sherbet. But they’ve been in Seminole Heights for a while now. They’re really good.”
Favorite place to be one with nature: TAMPA OR ST. PETE. Ro: “What I always found was, the moments where you just stopped and you looked up, you’re a part of something greater than maybe the next, you know, four stories around you. But I think in Tampa — and that includes St. Pete, too — you just feel closer to nature because you can see the water, you can smell the air, the salt in it. And the sky, there’s so much more of it.”