Beware of the Blob: Principle versus profits, and the redevelopment of St. Pete's Tropicana Field

cityofstpete/Flickr
A community meeting about Tropicana Field in St. Petersburg, Florida on April 7, 2021.

Right before Memorial Day weekend, St. Pete’s Mayor Rick Kriseman phoned finalists after winnowing the Trop site “Master Planner” field down to two. Alex Vadia, principal for the Midtown Group missed the call; his staff says he was inspecting a playground on a Miami property. David Carlock, principal of the Machete Group and driver for the Sugar Hill team, says he was mentoring a FAMU undergrad.

Vadia and Carlock expect to be talking with the city a lot this month.

Kriseman, meanwhile, expects friction from all sides. As the Rays continue to play footsies with other municipalities, also fronting the ridiculous plan for a “split season” with Montreal, City Council vows to slow down the process.

The time is right for reconsideration. What does St. Petersburg want from this massive development? And how did we reach this point?

The story of the 86-acre Tropicana Field site is a boomerang tossed by Jim Crow. Under segregation, African Americans forged a community around the Gas Plant, the neighborhood south of the railroad tracks along First Avenue S and what is now I-175. In the 1980s the city razed homes, churches and businesses, under the pretense of “urban renewal,” to build a stadium soon deemed obsolete.

In July 2020 Kriseman issued a Request for Proposals (or RFP), ostensibly to fix the past. The site falls within a zone slated for Tax Incremental Financing (or TIF), earmarked to remedy “blight and poverty in south St. Petersburg.” The same RFP included “21 Guiding Principles,” detailing the history and need for “economic equity and inclusion.”

But the rub. The instructions called for plans with or without a stadium. (The Rays will be gifted a hefty share of the property by staying to the end of their lease in 2027). Second, and more off radar, came a call for conference space, between 50,000 and 100,000-square-feet, with an attached “major flagship hotel.”

Will either, a stadium or conference center, bring “equity and inclusion?” Among urban planning scholars, the answer to both is a hard “no.”

My own understanding turns to the French philosopher Henri Lefebvre, who said that economic relationships “secrete” space. Lefebvre explained how street grids, zoning, code, everything from a sports arena to a homeless shelter, shape our brick-and-mortar social order. Levebvre’s terminology grosses me out, I must confess. Secretions call to mind smelly teenage glands and snail tracks. And his concepts can be hard to grasp.

So think of “The Blob,” the 1958 horror classic, where an alien parasitic jelly eats a town. The Blob creeps into every corner of civic life. It oozes under doors and through ductwork. Only a beefy young Steve McQueen (the actor, a white guy) can save the day.

The Trop site illustrates how profit-making will ooze, or “secrete” into our town. The monster quickly grows out of control. To keep the Blob from taking over the process, our best chance to fix a deeply divided city, we must batten down the points of entry.

With the 2020 RFP, Kriseman left open the front and back doors, calling for a convention center, and of course, the stadium. 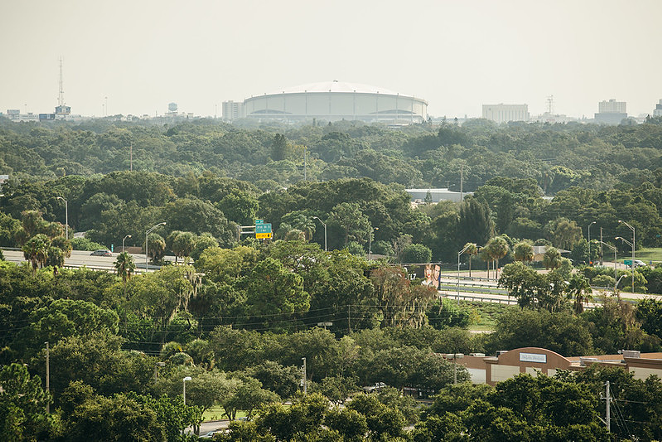 Nationally, the value of sports arenas has come under serious challenge. Ask a hundred economists whether municipalities should subsidize professional sports and 86% will say no. “The average stadium generates $145 million per year,” a UC Berkeley paper explains, “but none of this revenue goes back into the community.” Funds to help franchises build stadiums should instead go towards bridges, parks, housing, sewers—stuff a city really needs.

The consensus is clear.

So why do officials kowtow to outrageous demands? An antitrust exemption allows owners like Stu Sternberg—hatching a scheme to split the season with Montreal—to play municipalities off one another.

No politician wants to lose a local franchise.

The media then greases the wheels for exploitation, or clears a path for the Blob. Sports put newspapers at an “awkward intersection” of broader “business and political narratives,” the Columbia Journalism Review observes. The Times’ John Romano argues roundly that losing the Rays “would stink economically, it would stink reputationally, it would stink from a quality-of-life perspective.”

Simply put, this is not true. Bidding the Rays au revoir to Montreal would do no harm to the St. Pete economy. Waxing Caesar, a Brookings Institute report concludes “the economic benefits of sports facilities are de minimus.” Winter tourists will flock to our beaches, baseball or not. And taxes for a stadium? Far better to remedy systemic racism, the slime that compromises our civic “quality of life” on a daily basis.

Now imagine the sequel. If the Blob of baseball split in two, like an amoeba, the cloned follow-up would be called “Convention Center.”

Urban planners like Heywood Sanders debunk convention center “follies” with a hard thud. Cities, counties and states across the country have overbuilt to compete in a market that is already saturated. Politicians commission feasibility studies that are “at best scant, murky, and of limited reliability.” Decisions proceed off-record, “insulated from the vagaries of city politics,” with budgeting shell games that fall outside public scrutiny. Only a handful of these ill-advised centers run in the black. Even those deemed successful, like Baltimore’s Inner Harbor or New Orleans, have not budged the needle of poverty.

The national trend prompts a clear warning on the local front: if St. Petersburg wants to bring “economic equity and inclusion” to its south side, avoid the siren song of men in suits and (hotel) suites.

Yet Kriseman’s office presses forward, following the script for a boondoggle. In 2016, the city commissioned a “Downtown Hotel/Conference Center Opportunity” report. This white paper (not on the city’s public website, but shared with developers) opens with a half-truth. Downtown St. Pete, the first sentence reads, lacks “available hotel rooms and upscale associated meeting/conference space.”

The existing waterfront Hilton (whose website claims 47,710 square feet of conference space) and Renaissance Vinoy (60,505 feet) already fit the RFP’s projection of 50,000 feet. If the market called for more space, make no mistake, free enterprise would fill the gap. But the goal here is to rationalize corporate handouts.

The same report closes with a set of “Critical Assumptions,” or disclaimer that explains how the figures presented are not guaranteed. Like the speed-talker in a pharmaceutical ad, the Report backfills over bullshit. The analysis presumes “stable and moderate growth” from 2016-2020, making no allowance for “future economic shocks.”

The city follows a plan that pretends that COVID-19, hurricanes, and economic slumps never happen.

Industry players might brush this off as nay-saying. Machete Group’s Carlock makes a case for St. Pete as a corporate destination, and drawing from in-house studies, Sugar Hill calls for an ambitious $540 million, publicly-subsidized facility. The project would be a “powerful economic engine,” building upon the city’s existing amenities. Having cut his teeth on Downtown Disney, Carlock sees St. Pete as a tourist draw, and he underscores Sugar Hill plan’s elaborate machinery for job creation, economic inclusion, and even food security. The convention center project, he also concedes, can “scale down.”

Or better still, drop this line altogether. St. Petersburg has started down a course that has succeeded mostly in profiting investors, with equity as a second thought at best.

Beware of the Blob. As the theme goes, it “leaps and creeps and glides and slides / across the floor / right through the door.” Profits motivate the ooze through every vent and doorway, shaping space and replicating the existing economic order.

So shut the front and back doors. Consult the academic literature on convention centers. And as for a stadium? We don’t have Steve McQueen to save us. But how about this defense? Tell the Rays, “no.”

Thomas Hallock is Professor of English at the University of South Florida St Petersburg. He is currently writing a book of travel essays about why he loves teaching the American literature survey, called A Road Course in American Literature...
More
Scroll to read more Tampa Bay News articles
Join the Creative Loafing Tampa Bay Press Club