The Congressman has called for a bipartisan commission investigating Florida ties to the Capitol riots. 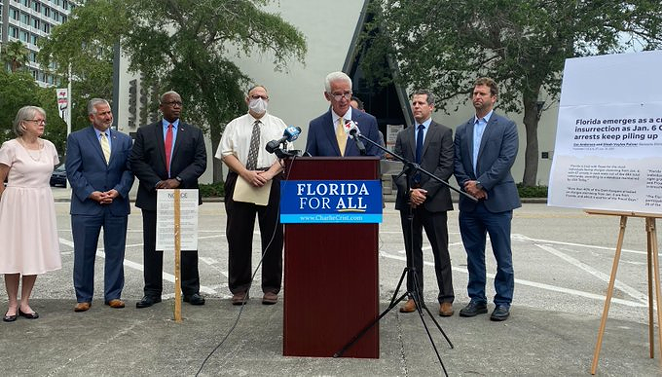 The St. Petersburg Congressman said the Republican Governor won’t address right-wing extremism or embrace the truth about the November election.

“Three days ago, I challenged Governor DeSantis to reject the Big Lie and launch a bipartisan investigation into Florida-based hate group members and their connections to the January 6th insurrection at our nation’s Capitol,” Crist said. “Our Governor could have done the right thing to keep Floridians safe and stop violent hate groups from organizing in Florida. Instead, he has chosen partisanship and division.”

After Gannett newspapers published a report on Florida being tied for the most arrests related to the Capitol riots, Crist called for a bipartisan commission to investigate links to the event. The state is home to a particularly high number of members of two extremist groups with a significant presence at the riots, the Proud Boys and the Three Percenters.

DeSantis Press Secretary Christina Pushaw in a statement to the Sarasota Herald-Tribune dismissed the idea of a commission as “raw political opportunism” on the part of Crist.

“Any individuals who are found guilty of committing crimes should be held responsible for their own actions,” Pushaw told the newspaper, adding Crist’s proposal “is tailor-made for left-wing corporate media, not for everyday Floridians.”

“Moreover, Crist’s framing blames more than 20 million Floridians for the actions of a few, and that is simply unfair — and unserious,” she added.

Similarly, a proposal for a national bipartisan commission to explore what led to the riots stalled in Congress after Republican leadership rejected it. While legislation passed the House with some GOP support, Trump, who was impeached for inciting an insurrection but not convicted in the Senate, attacked Republicans who supported the commission in a statement.

DeSantis has repeatedly changed the subject when asked if he believed Biden won a fair election in November. Just last week, he said “very shady” things went on in other states.

“I think some of this ballot harvesting you see across the country is a huge, huge problem,” DeSantis said, referring to states that allow third parties to collect absentee ballots.

There is no evidence of widespread fraud that would have affected the outcome of the Presidential election, which Biden won by an identical electoral college margin as Trump had over Hillary Clinton in 2016.

“If Governor DeSantis can’t admit the truth about something as simple as who the duly elected President is, is there anything he won’t mislead the public about?” Crist said. “Just as troublingly, his silence is empowering the hate groups that fueled the insurrection of January 6th. Floridians deserve better.”