The suggestion struck a nerve. 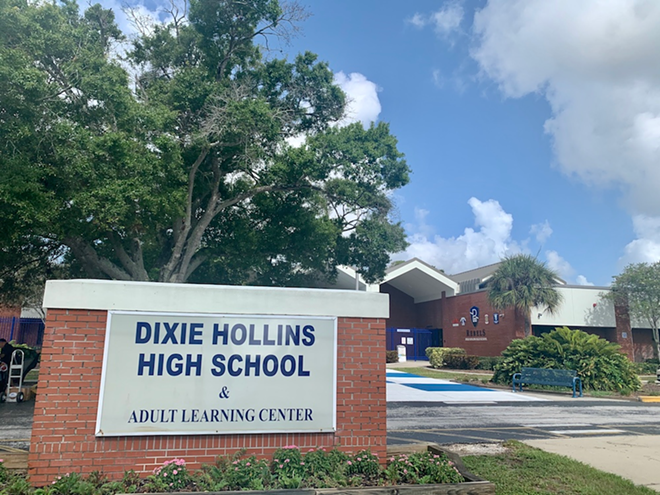 Last week, my article about renaming Dixie Hollins High School and its mascot outlined the history of racial injustice, race wars that plagued the school during desegregation and the years of reform that followed. While the school’s symbolism changed from a Confederate soldier on horseback to a grey haired plantation owner in a blue suit to simply the letter “R” for Rebels, the stench of the Confederacy didn’t go away.

As the piece went live, Dixie Hollins Students started a petition calling for change. On July 9, it was updated to read:

“We’ve received an email from the principal! To quote, he will be ‘convening with a group of student leaders shortly, to start the conversation.’ His response acknowledged the history and showed that he was open-minded when it came to finding a way to make the change.”

I was also contacted by Dixie Hollins’ great-granddaughter, Jen Cox, who was eager to help. She provided the following statement:

“Dixie Hollins was my great-grandfather. I had planned to approach the school and school board myself about making a change to the name, when I read that organizers had already begun that process, thanks to your article! The petition organizers’ goal is the same as mine—to preserve my grandfather’s name and contribution by changing the school's name to ‘Hollins High School.’ But, what’s most important, is the removal of anything that is correlated with hatred and racism, be it the fight song, the mascot, or the name ‘Dixie.’

It is my strong belief that we honor the necessary cultural changes we are facing, highlighted by the Black Lives Matter movement, as they relate to changing institutional names associated with racism. Whether we like it or not, words are assigned meaning, and they matter—a lot. The word “Dixie” is associated with the Confederacy, and it is past time to stop glorifying what it stood for. The pain that word causes our society is much more important than preserving a name. The fact that Dixie Hollins advocated for access to a better education for Black students back in the early 20th century underscores the irony that his first name is a word associated with racism.

My family has an opportunity to show support for the changes needed in our culture, and I hope that support will help further this process. I enthusiastically applaud the organizers for calling for change!”

Cox also made it clear that although her family has given their blessing for the name and mascot change, the organizers don’t need their permission to do what is right.

“I feel emotional and honored that they care enough to keep his last name and we hope to provide more history to the school,” Cox said in a phone call with CL. “This school deserves to have the opportunity to rebrand—they're working so hard to be an inclusive school and they’ve done so much work toward that.”

Cox connected with Principal Florio hoping to form a partnership, and hoping to provide history to the students and the school on the progressive triumphs of her great-grandfather. Cox also told CL that she is working on a letter on her family’s behalf for Florio to present to organizers.

The student body is crying out, and there are officially over 400 signatures on the petition. We can’t change the school’s past, but we can add its name to the list of schools on the right side of history and ready to move forward in the fight for equality. Now, with bated breath, we wait.

Other letters to the editor

I'm a 1965 graduate of Dixie Hollins and I found Jenna Rimensynder's article insulting. She would have served the public better had she done more thorough research for her article before branding our school "steeped in racial injustice"  for the last six decades. In the year 1971, Lou Brown hardly qualifies to be cited as "one of the "first African-Americans bused to Dixie" since that happened at least six years earlier. My yearbooks only go back as far as 1964 but Dixie had Black students at that time and, I believe, even earlier. It would have been nice to include those very first experiences from a White and Black perspective from those early times. I honestly can't remember witnessing any of the racial incidents she pointed out during my years there. Yes, there will always be incidents of hatred and racism in every setting in our imperfect world, but it comes from a place far deeper than any flag or school mascot. Why not worry about the innocent young Black children being shot down today for no other reason than to push a political agenda, Ms. Rimensnyder? Just quickly going through the yearbooks, I established these students [in a list passed on by this letter writer] were active participants in a variety of extracurricular activities.  Please be sure to let Ms. Rimensnyder know this info was all available just by taking the time to do a little more research before smearing our school's name which, even she admitted, was based on an individual who was an important figure in Pinellas County history and not based on a racist time in history. —Janice DeMeza

The National Christian League of Councils (NCLC) is requesting the Pinellas County School Board to change the name of Dixie Hollins High School and discontinue all symbolisms used by the school connected to honoring the Confederacy, specifically, the school’s mascot, song andflag, states Sevell Brown, III, NCLC’s National Director.

Since 1964, African American students have been forced to accept these symbolisms of the Confederacy—a Confederacy guilty of treason against America costing 675,000 lives in a Civil War. The Confederate States of America killed American soldiers, and assassinated President Abraham Lincoln.

Further, on behalf of African American students who attended Dixie Hollins High School before and after desegregation, which shamefully did not happen until 1971 in Pinellas County, we formally request our voice now be heard. Brown emphasized, to the Pinellas County School Board members “We demand the immediate cease and desist of honoring of all symbols of the Confederacy in Pinellas County, Florida.”

“As we watch in other counties and in other States that were part of the Confederacy, there is, finally, unanimous admission these are also symbols of hate against the African American community. They have no place in our county, and now is the time to address a long-neglected

Thusly, the NCLC has requested to be placed on the next Agenda for the Pinellas County School Board. —Sevell C. Brown, III, NCLC National Director

I am writing regarding your article about changing the name Dixie M. Hollins High School.  The claim is the school name strikes thoughts of racism. How could naming a new high school after the county’s first school board superintendent, more than 50 years ago, “instill fear in Black people?”  His given name was Dixie Martin Hollins. Looking at the life of Mr. Hollins, one would find that he was a philanthropist who donated land for the creation of two Pinellas county schools. His estate, nearly 60 years after his death, still provides funding to music department for his namesake’s school.

Honoring someone is now being used to instill fear? Is there proof that Mr. Hollins was a racist or the school board chose this name for the new high school as a racist “gotcha” to  Black community? If not, let it rest. Remember, innocent until PROVEN guilty.  IMO people exaggerate the issue of implied racism. Is there still racism in this country? ABSOLUTELY!  But if someone has the name “Bubba” does that imply that he is a big, dumb redneck?  No. As Shakespeare said “What is in a name? That which we called a rose by any other name would smell as sweet.”

So if Dixie Hollins was named Donald Hollins no one would care. Isn’t that profiling someone by just their name? Would that be any different than racial profiling? Both make predetermined conclusions without true facts. Both are wrong. Because this person was named “Dixie” it is automatically assumed that name or person is racist. Jessie James robbed banks in the 1800’s. Would we assume that everyone named Jessie would do the same? No. Of course not.

Martin Luther King in his “I Have a Dream” speech said,  “I have a dream that my four little children will one day live in a nation where they will not be judged by the color of their skin, but by the content of their character.”  What is we used the word “name” in place of “color of their skin” and apply it to this situation? Can we not truly look at the facts of the situation rather that knee-jerking to the latest hot button?!?!

UPDATED: 07/22/20 2 p.m. Updated to make clear that Jen Cox is the only Hollins descendent to go on record supporting the name change so far.