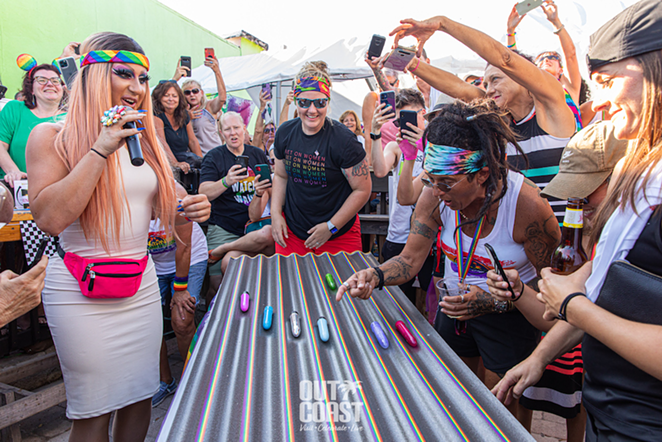 Gulfport, Florida is known for quirk. This LGBTQ-friendly epicenter of St Petersburg, with its motto “If it’s too weird for Gulfport it’s too weird,” is famous for hosting quirky events and queer people. Gulfport is home to a pink goat that struts around town during Valentine’s Day, an annual Gecko Fest Celebration, a Fairy Festival, a tree adorned with flip flops, parrots that ride shoulder on bicyclists, and more LGBTQ residents than one might find throughout the entire state of Florida. So when something quirky happens in Gulfport, it’s typically not a big surprise.

Reactions to the news varied from humor to disbelief to flat out anger.

“This may be the funniest post I’ve seen in ages!” wrote Sarah Wilson, a St Petersburg local.

I even chimed in! “Maybe we should do a BYOV for the race??”

“My wife says to have the race anyway 🙄. What is it like a 5k?” asked another commenter.

And others offered to donate money and vibrators to provide a happy ending for all.

Shortly after images of the perpetrators went viral, the two women were caught. Due to the low value of the theft and a 14-day follow-up window, arrests have yet to be made. However, it is obvious that their reputation has been tarnished for life.

The value of the stolen vibrators was estimated by Gulfport police to be $200, although Brewer claims it’s probably much higher. “I had just picked up three that were priced at $75 each,” Brewer reported to the Gulfport Gabber after the incident.

Last Saturday, seven vibrators were lined up on a plastic shingle roof adorned with rainbow and race tape. As vibrators were turned on, attendees surrounded the setup and waited patiently for the race to begin.

Attendees were encouraged to purchase tickets to bet on which toy would finish first. The vibrators were even given names and personal stories like “Destiny, Josie and Karen.”