Here's what you should know about me. 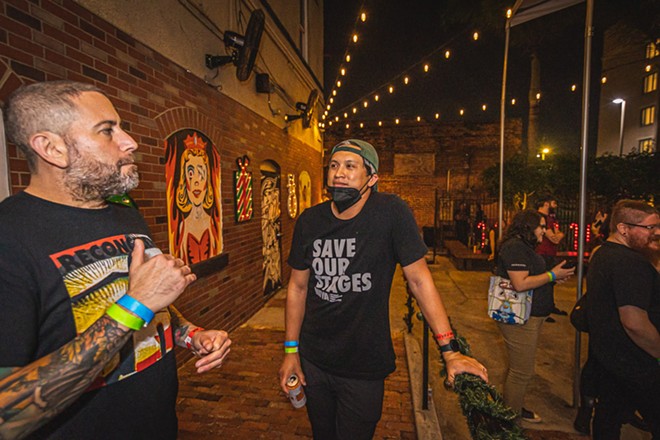 Photo by Dave Decker
The writer (center) at a January 2022 concert in Ybor City, Florida.
Reporters write about other people every day, but the copy often reveals more about ourselves than we realize. Still, there are times when you shouldn't have to read between the lines, and this is one of them.

Just like last year, I'm ripping off a tradition Orlando Sentinel columnist Scott Maxwell hijacked from one of his former colleagues, columnist Charley Reese. The idea is that if columnists are going to tell readers what they think, then they should also tell them where they stand. As another Bay area columnist Joe Henderson once wrote, "Transparency isn't something we can demand unless we're willing to be honest about who we are."

Here's what you should know about me.

I've freelanced for CL since 2011 and went full-time in 2016. In 2019, circumstances put me in the role I'm in today. And I'm grateful. Every day, I work with two staffers, one part-time reporter, one creative director, and a small army of dedicated contributors (some who've contributed to CL longer than I have) to edit and produce stories first for the website and then for layout in the physical edition of this publication. There is a dedicated group of sales and marketing people that make sure CL pays its bills (our publisher and senior sales rep have been at the paper for half-a-century combined); their belief in this publication and ability to partner with the community to keep the lights on is astonishing.

I think journalism's relentless pursuit of objectivity has hurt the vulnerable communities the "fourth estate" was supposed to protect and speak for in the first place. That said, you won't find an unfair news story in CL, and you won't find any writers tip-toeing around the difficult, and sometimes obvious, things that need to be said about newsmakers.

I'm an OK guardian for the 12-year-old rescue pup my wife and I adopted the summer before our wedding. I'm the father of a happy two-year old, too. My wife kept him healthy in utero, and keeps him safe out here in the world, but he's my participation trophy for being there at conception. My kid is the reason I get up every day—not necessarily because I love him so much (I do), but because if I don't get up and go to work, then there's no way I could afford to write the check for daycare, which I've picked up in lieu of my share of the mortgage.

Speaking of, my wife and I have been buying our house back from the bank since 2007. We do that using two sources of income: my salary from Euclid Media Group, which owns CL (in 2021, I averaged $1,836 per paycheck after taxes and bonuses) and her pay from a local hospital where she's a nurse. We have separate bank accounts. This year, I picked up one assignment for The Athletic. Other than that, no one else besides CL—where I started freelancing in 2011 before going full-time in 2016 and becoming EIC in the summer of 2019—has given me money.

I start my days when my son gets up between 6 a.m.-7 a.m. and take more meetings than I did last year. I started going to concerts again, but omicron has temporarily changed that (I'm vaxxed to the max, 5G style, too). I'm not on a diet anymore, but I still stress-eat McDonald's alone in my car. My resolution for 2022 is to write a thank you card every day; if you send me a note and tell me a little about yourself, I promise to send one back (204 E Henderson Ave., Tampa, 33602).

Because Florida is a closed primary state, I am still a registered Democrat. I haven't peeled off the 2020 Bernie Sanders sticker on my car.  I abhor both parties but still refuse to do mental gymnastics trying to both-erize everything to death. I also believe that people on opposite sides of the political spectrum can actually work together, just not in the kumbaya way (more like the we're both getting screwed by the same people, so let's organize and shut that shit down kind of way).

The housing crisis freaks me out. Listening to Phoebe Bridgers cover Tom Waits made me cry while I was walking home the other week. Outside of the office, people sleep in their cars. When I leave late, it's quiet enough to hear them breathe and cough through their windows. That breaks my heart. And it makes me want to do more.

And that's what motivates me to come to work every day lately. I'm lucky to work alongside folks who give the deepest of fucks about this city and the people who seem to get ignored in the broad conversations being had about politics, news, art, music food and more. Yes, we write about everything, but our contributors and staff want to do the work and make a difference. Being with them makes me a better person every day. I hope I can pass some of that energy to you and do this disclosure again in 2023.

Read his 2016 intro letter and disclosures from 2022 and 2021. Ray Roa started freelancing for Creative Loafing Tampa in January 2011 and was hired as music editor in August 2016. He became Editor-In-Chief in August 2019. Past work can be seen at Suburban Apologist, Tampa Bay Times, Consequence of Sound and The...
More
Scroll to read more Columns articles
Join the Creative Loafing Tampa Bay Press Club