It could be a box of pampers, or it could be an Xbox, you don't really know! 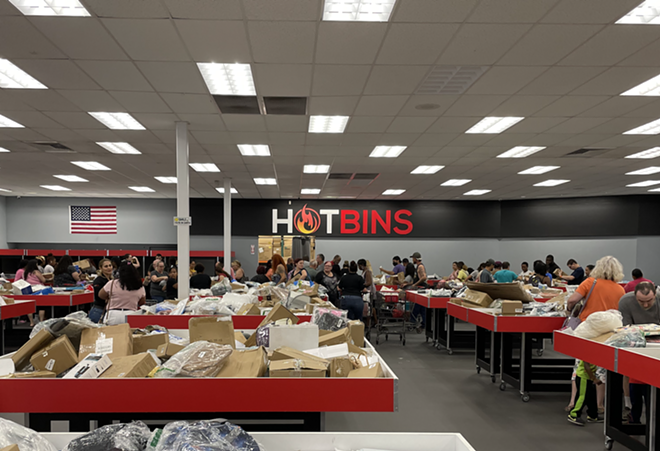 Photo by Colin Wolf
A store where the inventory is entirely made up of stuff people didn't want from Amazon and other retail giants is now open near Busch Gardens Tampa Bay.

Hotbins, located at 4001 E Busch Blvd, opened its first Tampa location on Oct. 14, and currently has three other outposts at Hialeah, Fort Myers, and Lake Worth.

For the uninitiated, everything at Hotbins is either an overstock item from stores like Target, Walmart or Kohl's, or an Amazon return (most of the time still in a box with no discerning labels).

It could be a box of pampers, or it could be an Xbox, you don't really know!

And, most importantly, everything is put out in large unorganized bins for you to rummage through.

Opening the boxes at the bins is against the rules, and will get you booted from the store. But every location does feature a box opening area, where an employee with an X-Acto blade slices open up your boxes and let's you peek inside before you buy.

The store is only closed on Thursdays to restock. Therefore, Fridays are the busiest days and the bins theoretically have better items, but the prices are highest at $12. The bin prices then drop every day until Wednesdays, when everything is just $2.

There's also daily raffles for prizes (when I was there it was for an air fryer), a guy on a microphone walking around yelling out hot deals, and a step-and repeat photo backdrop for customers to highlight their "hot" finds.