After a long and sometimes nasty battle, the dust has finally settled. 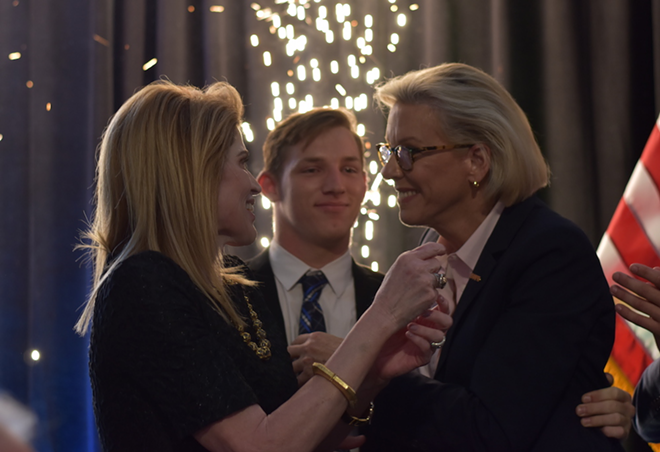 She will take office May 1, succeeding termed-out Mayor Bob Buckhorn.

“I have never been more hopeful about Tampa’s future than I am this evening. Tonight, we begin a new chapter in Tampa’s history and I could not be more excited to be a part of it. Tomorrow, the real work begins, because though we have accomplished so much, there is still so much to be done,” Castor said.

She thanked her two sons, her “biggest accomplishment,” and her longtime partner, “the invincible Ana Cruz,” who stood on stage with her during her acceptance speech.

She won the run-off election against retired banker and philanthropist David Straz, taking home 73.11% of the vote.

It’s also an increase in votes from Tampa’s last mayoral election without an incumbent, which had a 22% turnout. By comparison, the 2017 mayoral race in St. Petersburg had a 33.4% turnout.

Castor, 59, and Straz, 76, advanced from a field of seven candidates in the March 5 general election. Castor missed securing her spot as mayor of Tampa by just 2% of the vote, with Straz next in line with 15% of the vote.

In the past few weeks before the election, Castor racked up endorsements from pretty much everybody you can think of, including almost every living mayor of Tampa, including former Mayor Dick Greco, who was in attendance at Castor’s election watch party.

Straz never really had a chance, but he didn’t go down without a fight. His aggressive and sometimes outlandish campaign tactics made this race a somewhat bizarre one.

Weeks before the final election, he made a last-ditch effort to claim that Castor lied about reducing crime rates by 70%. He created a website solely dedicated to a smear campaign against Castor and at the final debate between the two, he claimed he had obtained “a report from the state of Florida that proves those things that I have been saying are absolutely true.”

Straz’s claim came from a 2007 state audit by the state Office of Program Policy Analysis and Government Accountability, which the Castor campaign provided. The report stated that the department’s reporting practices were significantly correct and that there were no intentional misclassifications or non-reporting of UCR offenses.

Straz also touted the fact that Castor’s partner, Ana Cruz, has been the subject of controversy because of her role as a powerful lobbyist at Ballard Partners who could potentially influence development and other big issues in city government.

“They have a good old boy network in the city, starting from [Mayor Bob] Buckhorn and Castor and her partner, who’s a lobbyist. It’s an awful thing,” Straz said at the last debate.

But Castor and Cruz have both publicly said that Cruz won’t be involved with any business related to the city.

The president of Cruz’s firm, Brian Ballard, sent out a memo to the company stating that Cruz would not be involved with or profit from any business related to the city of Tampa.

This theatrical race got nasty toward the end, but Straz’s negative campaign strategies failed to work in his favor.

“If you want the best for Tampa, you want Jane Castor to succeed as mayor,” Straz said at his watch party after the results came in.

Castor didn’t mention Straz in her acceptance speech, but she did talk about her campaign’s positivity, a stark departure from Straz’s run, which was marked by negative campaign strategies.

“No matter what we were faced with, no matter what obstacle was put in our way, we remained positive and focused on the issues that mattered,” she said.

Throughout her campaign, Castor never made a big deal of the possibility of being the first gay mayor in the region. She focused on her platform and her plan to make Tampa safer. Though she’s a champion of diversity and LGBTQ+ rights, she wants to her legacy to be more than her sexual orientation.

“This is a historic night,” Smith said. “It’s never been more important for our city to have a leader that stands for equality for all.”

Stay up to date with Tampa Bay news, views, arts, culture, food and more — subscribe to our newsletters!