Jason Sowell, founder of Tampa's Current Initiatives, looks back on 10 years of soap and hope

A different kind of Florida Man. 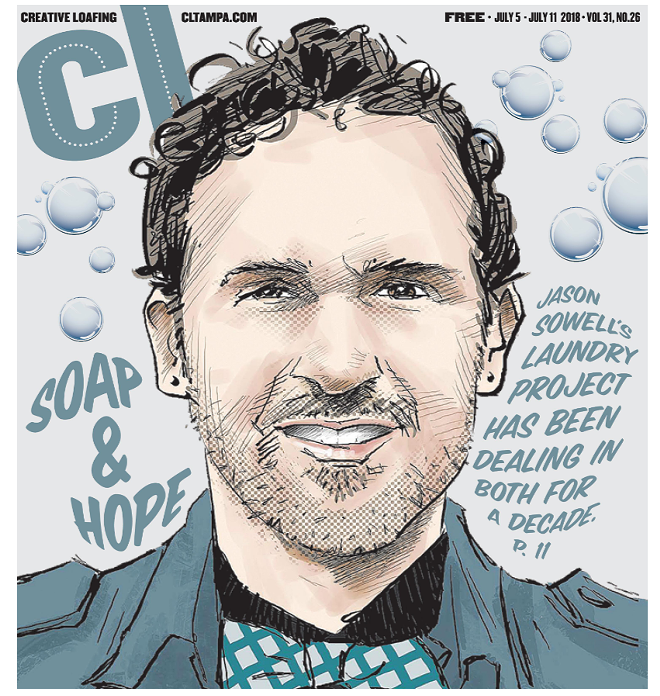 Florida men bring a lot of infamy to the Sunshine State. In the last month, guys from ‘round here have clung to the hoods of cars going 70 mph, torched their own naked bodies and even ridden lawn mowers through Jacksonville (and that’s not counting the kidnappers, murderers and Flakka-users). Thankfully there’s one Florida man unintentionally acting as an antidote to the lunacy.

“Honestly, there are so many great things in Florida and so many incredible people doing incredible things that I don’t feel like I’m bearing that much responsibility.”

That’s Jason Sowell, a Panama City native and proud Tampanian who founded Current Initiatives 10 years ago with one mission in mind: to educate communities on social initiatives while mobilizing them to bring about change. Sowell, who turns 40 this year, hopes that his organization’s work makes Florida known for its diversity of culture and innovative ways of helping those in need. Current’s most famous program — Laundry Project, which assists lower-income individuals and families by simply covering all expenses and providing necessary items required to wash clothes and linens — helps toward that goal. The service is given to families with no strings attached, which is a little hard to believe considering Sowell’s B.S. in Church Ministries from Trinity Baptist College in Jacksonville.

“I’m a big believer in actions speak louder than words, and I feel like the church world has forgotten that,” Sowell told CL. His benchmark, predictably, is Jesus Christ, but Sowell is quick to point out that that modern interpretations of that famous son of a carpenter aren’t what he perceived the man to be.

“The mass of society in his day were not flocking to him because he was telling them what was wrong with them and why they were going to hell. They were flocking to him because he gave value to the disvalued, hope to the hopeless, fed people that were hungry, hugged people who were untouched because of disease, preached equality to the injustice of discrimination, and healed people that were broken.”

So Sowell follows suit, and harrasses bank tellers for change. Current spends about $600 in quarters at each event, and, as of last month, has washed 120,511 loads of laundry for 12,282 families at more than 60 laundromats in 30 different cities. That’s north of $200,000 spent on suds. Sowell, however, isn’t sure that the 20-year-old version of himself would recognize the one in front of the mirror these days.


“I think 20-year-old me would be surprised that 40-year-old me still has hair,” he joked before admitting to past ideas about pastoring churches for the rest of his life. He’s got no training for what he does today, and is basically making it up as he goes, but he knows that his younger self would be proud of 40-year-old Jason for not dreading going to work every day. Still, there is a stirring, and a lingering internal dialogue that says he might not be doing enough. He mentions moments when he’s said the wrong thing or hurt others’ feelings as a result of his self-assuredness. He uses that Luke Skywalker analogy about the horizon to explain the times when he couldn’t simply enjoy the good things he had in front of him.

“I suffer from always looking at the excitement of what’s next and sometimes miss the enjoyment of what’s right now,” Sowell said. He’s fully aware of the worst parts of himself, but the optimist inside is always asking him to look past the worst that sometimes lives in others. Therapy helps him deal with the negative and self-critical slices of his mindset.

“It bothers me that there is so much anger and hypocrisy in our world and we’ve almost forgotten how to have meaningful conversation and separate true friendship from a difference of opinion.”

And where does his mind go when he thinks about how the community members themselves can be helpers that potentially take the torch or create Laundry Projects of their own?

From the universities where he lectures to the high schoolers and young adults not just verbalizing what they see as wrong with the world but also trying to find constructive ways to create change, Sowell is excited. Folks are finally trying to balance the business of making money with the business of taking care of people and bettering communities. He sees it in other organizations — Pep Rally, Inc., Boss Babe Club (now known as Babe Crafted), Urban Conga, Inside the Box, Vistra Communications or Well Built Bikes — and he deflects our appreciation of Current towards unsung heroes like Jada McMillon of Positive Spin or Russell Johnson from Urban Young Life.

“For the past decade they’ve been influencing that next generation of minority leaders and families in Sulphur Springs and the University area like no other,” Sowell said, adding that future leaders need to know that the world doesn’t need another famed community, national or world influencer.

“The world needs the first you,” he said.

We can get really lost in looking at the big picture and oftentimes miss the opportunity to help someone in need right in front of us. It’s the same blindness that keeps us from recognizing that we often need help to solve problems. The future of philanthropy, according to Sowell, is also in the people Current helps at each Laundry Project, where folks with the least resources give more to another family that has it even worse.