The officers made fun of the shooting, and kept the dog from getting to veterinary help as the dog bled. 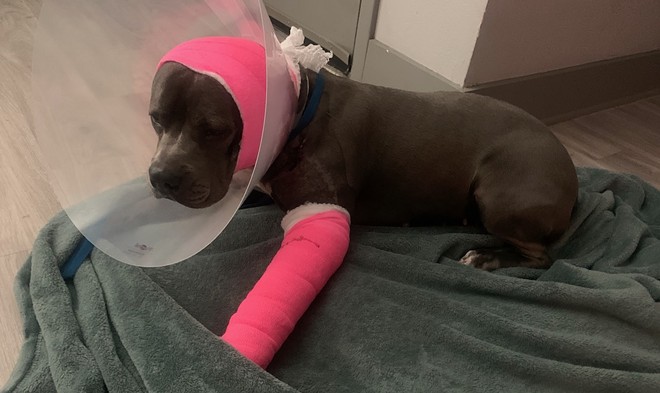 Rachel Robledo
Nala recovering from injuries after being shot by TPD.

Last year, a Tampa Police Department officer shot a dog twice in front of its owner while pursuing a suspect.

The department defended the shooting to the local news media, but newly obtained documents and video add disturbing details to the incident.

Video, emails and text exchanges show officers joking about the shooting and preventing the dog from going to a veterinarian as the dog bled from gunshot wounds.

On top of the officers' behavior, the Internal Affairs investigation was flawed, says Rachel Robledo, owner of the dog shot by TPD.

She wonders if the department ever truly sought accountability for the officer that shot her best friend Nala, a gray and white pit bull who neighbors called a kind and gentle dog, leaving many confused as to why she was shot.

Nala recovered, but Robledo's life has been upended since the traumatic event. She says the weight of the shooting has "sat on her chest" for over a year.

"This injustice has been devastating," Robledo told Creative Loafing Tampa Bay. "It is constantly on my mind and has impacted every facet of my life."

On March 17, 2021, TPD officer Shadai Cunningham shot Nala twice—once in the left cheek and once in her left shoulder, while responding to a call.

About a half hour before the shooting, Robledo had contacted TPD to report a person who she saw holding a rifle on a second-story balcony at the South Tampa apartment complex that she lived in. Two months earlier, an armed man was shot by Tampa police at the same apartment complex, so Robledo was worried about her safety.

A text from Cunningham to her fellow responding officer Joseph Estrada shows that her mentality going into the situation favored the alleged person holding the gun.

"Smh, people get on my nerves," Cunningham wrote  to Estrada. "It's Florida people are allowed to have guns in their homes."

When Cunningham and Estrada couldn't find the person allegedly holding the rifle, they went to Robledo's apartment. As she opened her front door, Nala squeezed out past Robledo's leg and ran toward Cunningham, who quickly drew her pistol and shot.

Bodycam footage shows Nala running away whimpering while Estrada yells "What are you doing?!" at Cunningham.

In the days following the shooting, news reports cited TPD, which stood by Cunningham's decision to shoot the dog and told reporters that Nala was recovering from surgery.

But documentation of the shooting tells a deeper story.

In a 2020 request for a second extension to complete her training, a supervising corporal noted that Cunningham was having trouble completing training because of performance problems including, "issues involving officer safety in general, problem solving/decision making ability, and self-initiated field activity."

Documents released in the months after the shooting also show that Estrada was injured by the bullet that hit Nala, receiving "ricochets in his arm" and ending up with "superficial scarring."

Body Camera video shows that after the shooting, Cunningham was pulled to the side and her body camera video shows her being reassured by another officer that she would receive union representation when responding to a supervisor about the incident.

And the day after the shooting, several officers who responded to the scene of Nala's shooting made fun of it.

In a text message exchange,  Estrada, who had violated department policy during a domestic violence investigation, officer Robin Sarrasin—who has a disciplinary history with 11 violations, one for misuse of firearms—and officer Bryan Czop discussed getting something to eat.

"hold the bullets on that one!" wrote Estrada.

In another text exchange discussing the status of the dog, Sarrasin said, "It's not the dog's fault its owner is a moron."

The night before these callous exchanges, Sarrasin wrongly prevented Robledo and her good samaritan neighbor from getting Nala to an emergency vet as she was bleeding from the wounds Cunningham had inflicted, body camera video shows.
click to enlarge

Tampa Police Department
TPD officers prevent Nala from getting to veterinary help after she was shot.

As the neighbor is pulling away in Robledo's car, officer Sarrasin runs up to stop the car from leaving, knocking on the driver's window, where Nala was in the front seat. Sarrasin then blames the shooting on Robledo, who was sitting in the back.

"This is why people need to keep their dogs on leashes!," Serrasin shouts before telling the driver to stop as several neighbors run up to ask the officer why she is preventing the dog from getting to help.

Sarrasin tells the driver that they have an ambulance coming for Nala adding that, "if you leave, the paramedics can't look at him."

"OK, but paramedics are not veterinarians!" a neighbor shouts.

"Y'all can back up!" Sarrasin shouts back, putting her hand out.

The neighbors continued to argue, saying that the officer shouldn't restrict the owner from taking her dog to a veterinarian. Meanwhile, Robledo was in the back of the car, screaming because she was being held against her will—a potential violation of the Fourth Amendment.

About five minutes later, a fire rescue paramedic sided with the neighbors.

"I honestly don't ever work with animals, I mean, I could put a bandage on him, but I would take him to the vet immediately," the responding paramedic said.

"Sarge said 'no 'that's why they're still here," Sarassin said, referring to sergeant Shannon Murphy, who was on the scene.

This left the paramedic bewildered, saying "Why would?..." trailing off as other paramedics handed gauze pads through a crack in the car window to try to help stop Nala's bleeding.

After this interaction, seven crucial minutes passed before TPD finally allowed them to leave to get Nala to proper care.

On top of the trauma she suffered, Robledo isn't convinced that TPD's Internal Affairs (IA) investigation into the incident was satisfactory.

The complaints that Robledo made against the responding officers Sarrasin, Estrada and Sergeant Murphy were not pursued as part of the shooting investigation.

The IA files show that both Cunningham and Estrada were interviewed and that the reports from that night were reviewed by IA. At the end of the review, IA found that Cunningham was justified in her use of deadly force.

CL contacted TPD for comment on the newly received  information, including why the IA investigation didn't include the officers who stopped Robledo from leaving to get Nala help, but has not yet received a response.

Robledo didn't receive help from TPD for the shooting, and set up a GoFundMe to help with the ongoing medical bills and legal costs to pursue justice.

More than anything, she wants to see changes at TPD so things like this don't happen in the future to other people.

"The Tampa Police Department needs reform and a culture of professionalism and accountability," Robledo said. "I know that this is much bigger than just Nala and me."