The language was crafted by the city's legal team to cater to recent federal and state attacks on abortion. 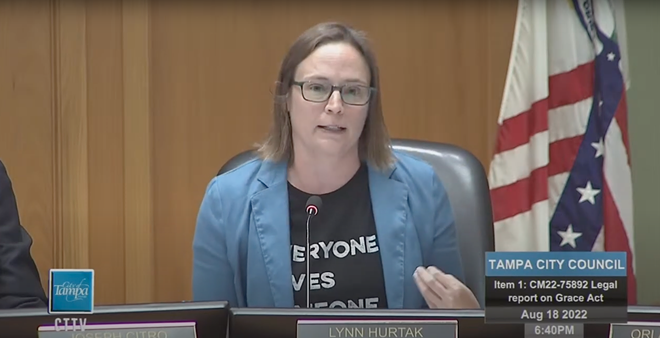 City of Tampa
Councilwoman Lynn Hurtak argues for a resolution that would use stronger language to protect abortion rights at a city council meeting.

Last night, Tampa City Council voted to pass a resolution that claims to support  reproductive rights, but the language was crafted by the city's legal team to cater to recent federal and state attacks on abortion.

In a 5-2 vote, city council voted to approve the resolution, with Orlando Gudes and Lynn Hurtak voting against it. Guido Maniscalco, Luis Viera, Charlie Miranda, Bill Carlson and Joe Citro all voted in favor of the city's resolution.

Hurtak had initially presented the idea of the resolution, but the city legal team's amended version had key differences from what she originally suggested.

The most glaring difference is that Hurtak's version called for the local decriminalization of people and providers pursuing reproductive rights, regardless of what state or federal law might say.

City legal removed that, basically making the resolution worthless, according to Hurtak.

"This is what was added by the attorneys, 'except as may be required by state or federal law' which, in my opinion basically negates the whole point of this,"  Hurtak told council. 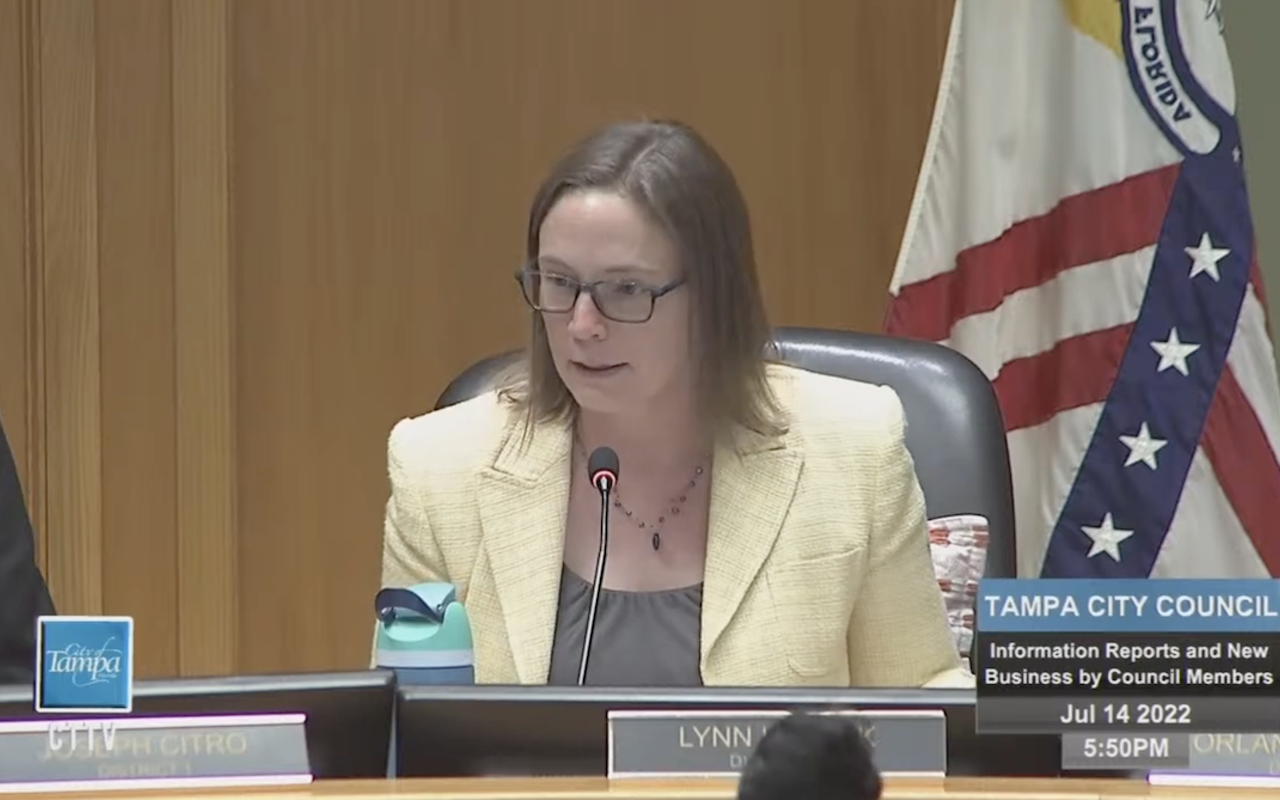 Tampa councilwoman calls for legal staff to look at local protections for reproductive rights: Hurtak asked for a report back from the legal team on Aug. 4.

Last month, Hurtak presented the idea for an act similar to the GRACE Act in Austin, Texas, intended to prevent any city department, including the police, from any action impinging on the rights of residents to make reproductive health decisions for their own bodies.

But Hurtak said city legal's change to the resolution caters to bad laws, and pointed out that historically, state laws are often found to be unjust after they face legal scrutiny.

"Florida has passed laws that weren't declared unconstitutional until after years of effort, they found a friendly court," Hurtak said. "To this day, Florida Statutes Chapter 256 bans the burning of the Confederate flag."

Hurtak's version of the resolution also said that abortions would be considered the lowest level priority for local law enforcement to pursue, and called for the city to not be involved in funding so called "pregnancy centers" that work to oppose legal abortion. These provisions were also removed by the city's legal staff. Tampa Mayor Jane Castor says she will not direct TPD to arrest those who have had or seek abortions: Two weeks prior, Gov. Ron DeSantis suspended state attorney Andrew Warren for calling the 15-week abortion ban "unconstitutional."

Before the vote, several people from the community—including members of the Tampa Democratic Socialists of America, which helped Hurtak craft her resolution— agreed with Hurtak's outlook by a large majority. Public comment went on for nearly an hour as the community told council that passing Hurtak's version of the resolution was important for their safety and livelihoods.

The councilwoman thanked people for speaking up, and made an emotional plea as the only woman on council.

"I am so much less safe than any of my fellow council members. I can go out tonight, I can be raped, I can be forced to carry a child against my will.  I could be pregnant, and not be able to protect myself."

"I am so much less safe than any of my fellow council members," Hurtak said. "I can go out tonight, I can be raped, I can be forced to carry a child against my will.  I could be pregnant, and not be able to protect myself."

Still, the city legal team argued against Hurtak's resolution, saying that the laws are currently complicated and change frequently.

"The reason why we put in 'except as may be required by state or federal law' is that current state law could conflict and does conflict with some of the specifics that are written into this resolution," said Megan Newcomb, Chief Assistant City Attorney, who drafted the city's version of the resolution.

Councilman Carlson said he was against Hurtak's resolution because it is symbolic and not legally binding, but still voted for the city's version. Before the vote, Carlson and others tried to get Hurtak to change her resolution so they could pass it with different language, which she refused to do. 'The governor's authority is not unlimited': Andrew Warren's federal lawsuit tests DeSantis' ability to remove elected officials: The lawsuit also seeks to test if DeSantis properly exercised his powers in suspending Warren for alleged “incompetence” and “neglect of duty.”

Gudes, the only council member who voted with Hurtak against the city's resolution, said that he the resolution should have been passed as the councilwoman wrote it.

"I don't have any issue symbolically passing a resolution, we make plenty of resolutions," Gudes said. He agreed that the city could work on the ordinance via a workshop after Hurtak's resolution was passed.

Other council members shared their views on both resolutions, including Charlie Miranda, who said his wife lost two children due to a miscarriage.

"In today's modern time, maybe they could have done something, some surgical procedure where one would have been taken out and the other child, you know, would have lived, but that wasn't the case," Miranda said while looking at the crowd of people who had shown up to speak for reproductive rights. "So I understand what you're saying."

The vote on the resolution came a day after Tampa Mayor Jane Castor publicly said that the Tampa Police Department would not pursue people seeking abortions, saying that arrests are "100% not going to happen."

"The Tampa Police Department is here to work with the community on the issues that they deem important, to keep the community safe [and] to ensure that people aren't victims of crime, not to go out and prosecute individuals for personal choices that they've made," Castor said. "So that's about as simple as it can get."

Councilman Maniscalco referenced the mayor's statement when discussing the resolution. "I would believe that the mayor has the people's back," he said.

But Carlson said there needs to be more than a statement to the media from the mayor. "If we approve something, then she should put her signature to this piece of paper also," he said.

Just before the vote took place, Hurtak let her feelings on the city's resolution be known.

"I don't think this goes far enough," Hurtak said. "I think that saying that we're not going to appropriate funding and making it the lowest priority [for law enforcement] is pretty simple. And I believe that the mayor said that she agrees with us. To me, this takes the entire point out and if that's the pleasure of council that's fine, but I will not be voting for it."

Today, Hurtak told CL that the struggle for reproductive rights is not over in Tampa, and that a legally binding ordinance is still on the table.

"I will absolutely still be doing an ordinance but I think it will be more more specific to Tampa," Hurtak said. "Some of my colleagues said they wanted an ordinance, so I'm happy to bring one back and look forward to their support."