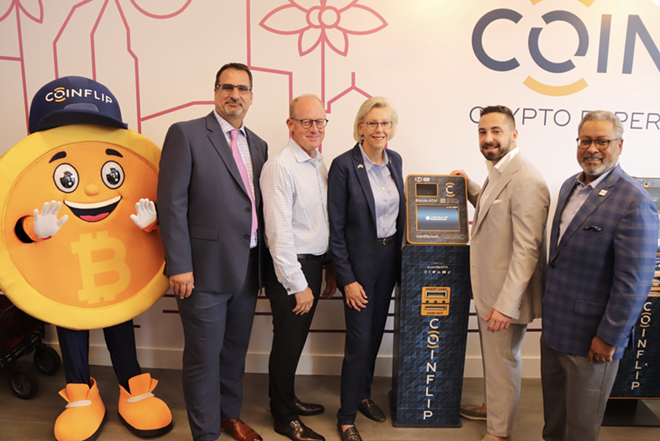 Photo via Jane Castor/Twitter
Tampa Mayor Jane Castor was on location to help kick off the opening of a new cryptocurrency hub, despite losing more than half a paycheck to Bitcoin.

Yesterday, the mayor attended the opening of CoinFlip's new "Crypto Experience Center" in downtown Tampa's Sparkman Wharf and informed residents that the new business has "got it all."

"The new Crypto Experience Center has such a unique approach to educating people on bitcoin & leveling the playing field for EVERYONE who is interested to learn & invest," tweeted Castor Tuesday afternoon.

✔️ Bitcoin ATMs
✔️ 40+ new jobs
✔️ Local artists' NFTs
✔️ 1-on-1 lessons @coinflip's got it all! The new Crypto Experience Center has such a unique approach to educating people on bitcoin & leveling the playing field for EVERYONE who is interested to learn & invest. pic.twitter.com/mlSTCGgk19

The mayor's appearance at the event comes after the fact that her current crypto wallet, or at least part of it, took a giant hit.

Last November, Castor hosted the Bitcoin and Blockchain Summit in Tampa and told media outlets that she would accept two paychecks in the form of Bitcoin, following other mayors, like Miami's Francis Suarez, who also jumped on the crypto-bandwagon.

“Apologies for coming late to the conversation,” Castor tweeted in response to Suarez’s paycheck Bitcoin conversion announcement from Nov. 2. “But I’m certainly up for the challenge."

Apologies for coming late to the conversation - we've been busy preparing for today's cryptocurrency conference here in the @CityofTampa. 🪙😏 But I'm certainly up for the challenge! #ForbesTopEmergingTechnologyCity #FloridasTechCapitol #TechTown

In an email yesterday, City of Tampa Communications Director Adam Smith told Creative Loafing Tampa Bay that Castor ultimately only had one paycheck converted to Bitcoin, which is a good thing considering that paycheck is worth 67% less than if she just got a regular old direct deposit.

According to public records, Castor's annual salary in 2021 was $170,539. So, assuming she was paid bi-weekly, then one paycheck before taxes and other withholdings, comes out to approximately $6,559.

Now, putting this much money into crypto last fall probably didn't seem that risky. To be fair, in November of 2021, Bitcoin was at a record high of $68,990, with tech bros predicting at the time it would surpass $100,000.

Of course, that growth didn't happen, and just about every cryptocurrency slumped to dismal levels last summer. Even today,  the currency is valued at $20,147.80, which is a a massive drop from its November peak.

So, where did all that money go? Well, it was cashed out by people who purchased Bitcoin before you did, and most importantly, realized it's a pump-and-dump scheme before you did.

Unfortunately, Mayor Castor did not do this.

Smith told CL that Mayor Castor's paycheck is still invested in Bitcoin, which means if she converted it during that first week of November last year, according to the Bitcoin Profit Calculator, it would now be worth roughly $2,117, a loss of $4,441.

For many Tampa residents this is a significant amount of money. The median household income for an average Tampa resident is now $61,000, according to a recent Zillow study. This means Castor's crypto loss is equal to nearly two bi-weekly paychecks for the majority of her constituents, or roughly the equivalent of two monthly rent checks for a one-bedroom apartment.

But despite her dismal crypto wallet, Castor had nothing but positive things to say at yesterday's event, according to The Catalyst.

"Everyone can learn the value of crypto," she said, "and the idea that cryptocurrency is leveling the playing field for everyone.”