Geofencing has caused thousands of innocent people across the country to become suspects in crimes and infringes on constitutional rights. 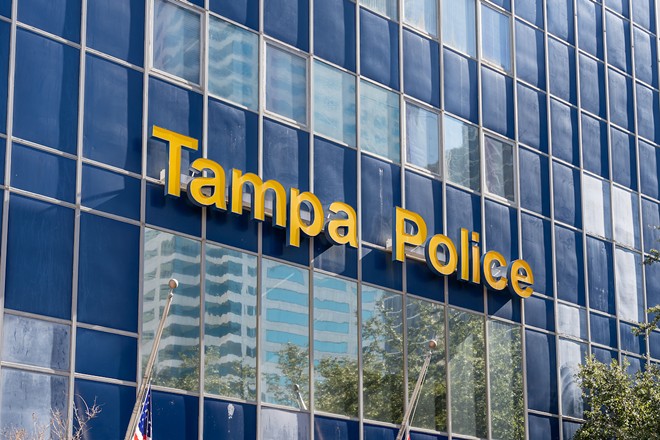 Tampa police are currently using a surveillance tactic that collects digital data to investigate suspected crimes. But the same tactic also spies on everyday citizens and can lead to innocent people being wrongly accused of crimes, causing experts to call the practice unconstitutional.

The widely controversial process termed "geofencing" collects data from any electronic device that was in an area designated by the police, within a certain time range. Public records obtained by Creative Loafing Tampa Bay show that TPD has used this problem-ridden tactic several times this year.

Police across the country have routinely fumbled the use of geofencing, which has resulted in spying on civilians.

One instance led a federal judge in Virginia to rule the tactic unconstitutional when it was used during a bank robbery investigation in 2019. The Harvard Law Review points out that thousands of innocent people are made suspects each year through police geofencing, and that even an innocent bicyclist has been falsely suspected of a burglary for riding near an area that was geofenced, because the geofences sometimes capture data many feet away from the intended target.

A geofencing warrant approved by a Hillsborough County judge on Feb. 10 shows a TPD officer requesting a geofence surrounding the area near two businesses. In the request, a detective asked for all Google location data for two hours where a suspected burglary occurred, in order to track who had entered or left the property.

Entourage Streetwear and Diva Beauty Supply off of 22nd Street in Belmont Heights were the targets of the geofence, along with the parking lots for both of the businesses. But an employee of Diva Beauty Supply who only wished to be identified as "John" out of a wish for privacy, told CL that he was not made aware that the place he works at was being geofenced.

This means that if he was there, or if he had left a device at the location that was associated with Google, then that information could have been wrapped up in the suspected crime. The same goes for anyone else's device within the geofence. For example, if a customer accidentally left their device on the property, or if a passerby got too close to the geofence.

"No one told me and I don't think the owner knew about it either," John told CL.

He was not marked as a suspected criminal in this case, but this example speaks to the bigger problem that police geofencing creates. It has the potential to turn innocent people into criminal suspects by violating the constitution, and does so regularly.

Defense lawyers and civil rights advocates across the country have argued that the tactic violates the Fourth Amendment, which protects a citizen's privacy by not allowing police searches of citizens without probable cause and without the cops knowing who they are searching for. Most of the time, geofences are created because the police don't know who they are looking for and want to identify them, causing a conflict with the constitution.

And more than that, the use of geofence warrants do not have established federal regulations.

Jake Laperruque, Deputy Director for Security and Surveillance at the Center for Democracy & Technology, told CL that this means that the requests are approved on a judge-by-judge basis, and police departments are not required by any federal mandates to dispose of extra information they might find in the geofencing process.

"For geofencing to be reliable, there needs to be more federal regulation of how the warrants are used by police departments," he said.

Jennifer Lynch, Surveillance Litigation Director at The Electronic Frontier Foundation (EFF), which  investigates the use of police geofencing, said a major issue is that the process doesn't begin with a particular suspect, which is the usual method for pursuing warrants.

"I think the biggest concern is that this is a dragnet search," Lynch told CL. "So the police don't have a suspect when they ask for the data to begin with, and that runs the huge risk that you're identifying people who are wholly innocent. That puts those people under suspicion for no other reason than they were in the area when a crime occurred."

Lynch explained that the Fourth Amendment requires specific searches, where the police have some reason to believe that a suspect, or a particular device, are at least somehow linked to the crime. With geofencing warrants, the police are searching for a suspect they don't have yet. This creates more room for error in their search, leading to the innocent people sometimes being turned into suspects.

Other emails show that TPD has used Google geofencing on an East Tampa apartment complex, where the department geofenced a unit and tracked who came in or exited while looking for a robbery suspect.

Documentation shows that TPD also participated in a different type of geofencing that doesn't require a warrant.

In email exchanges, TPD was trying to help the Hillsborough County Sheriff's Office locate a suspect that had allegedly committed theft earlier this year.

A Hillsborough County Sheriff's Deputy asked TPD to check the city's license plate reader cameras for a Chevy Tahoe, the owner of which was suspected of stealing catalytic converters from cars.

A crime analyst at TPD then scanned video of all cars with technology from a surveillance company called Vigilant Solutions. In 2018 EFF exposed Vigilant for sharing its information with Immigration and Customs Enforcement (ICE).

"I ran all scans within 2 miles of the offense location from 0250-0415 hours and there wasn't a single scan," the analyst wrote. "Vigilant is also basically useless for make and model searches so I just do a geofence of all vehicles and sort through them."

CL contacted the analyst for clarification on what they meant by saying that they geofenced all of the vehicles. They were not willing to comment, but Lynch of the EFF said that the analyst most likely realized that the normal way of searching the camera system was not working, so they asked the Vigilant database to show every vehicle within a two mile radius of the scene of the suspected crime and went through the video of the vehicles on their own.

The problem with using the technology to sort through all of the vehicles in the area is that it essentially violates a citizen's right to not be spied upon while driving around.

"In many police departments, searches like this are completely standard procedure," Lynch said. "But that doesn't mean that I think that it's constitutional."

And TPD officers have even had discussions with the state attorney about how to navigate the nuances of a geofence warrant without violating the constitution.

"Maybe you’ve seen this ruling but it reads to me that the best course of action is to get a search warrant at each stage of the geo­fence process," Van Heyst wrote.

Doherty agreed, adding that geofencing should be used carefully, and saying that an officer needs to be able to clearly explain how private citizens' information will not be grabbed in the searches.

"If LEO cannot articulate this, then a search warrant should not be sought or approved," Doherty wrote. "So searches utilizing this process should be extremely limited."

Doherty then gave Van Heyst lengthy advice on how to use a geofencing warrant that would hold up in court.

She finished by returning to the main point, saying that if TPD can show how the actual suspect can be identified and narrowed down, then probable cause for the geofencing search warrant will exist. She said that in such a case, "we should be able to survive any attacks in court."

SAO13 has publicly said it would decline pursuing criminal charges in the case of anyone seeking abortions, but reproductive rights activists across the U.S. have warned that geofencing could be used to prosecute anyone violating a state's abortion ban.

TPD's use of geofencing raises a lot of questions.

How long has TPD been using Google geofencing and how many times have they used it? How long has the department been using Vigilant Solutions to scan cars when pursuing a suspect and what other agencies does the information get shared with? How can the public be assured that the use of geofencing won't turn innocent citizens into suspects?

These are just some of the questions that TPD has yet to respond to.

CL's initial public records request into geofencing only included two-and-a-half months worth of TPD communications about the subject, from March 1-May 16, in hopes of getting a timely response to the request. About a month-and-a-half after the request was made, CL received the documentation.

We'll continue to make requests into TPD's use of geofencing to share more with the public.

Until then, the Harvard Law Review issued simple advice to any innocent person who becomes a suspect because of geofencing: lawyer up.

But not everyone has access to a lawyer, so the group also called for governmental protection from police spying on civilians.

"Rather than waiting for challenges to geofence warrants to percolate and make their way up the court system, Congress must engage in proactive legislation — as it has done with other technologies, to ensure that law enforcement across the country does not continue to abuse geofence warrants," the group wrote.