'This is about basic human rights, and it is far from over.'

She discovered one method that she thought might help: for the city not to fund criminal investigations into those seeking abortions, along with their healthcare providers.

But over the last four months, she's been roadblocked at several city council meetings when trying to legally secure that abortion will be a non-priority for the police.

Yesterday, when she proposed a city charter change that would prevent city funding from being used to criminalize abortion, nearly all her male colleagues voted it down, with only Councilman Orlando Gudes in support.

The vote from councilmen came after City Attorney Andrea Zelman recommended against Hurtak's motion, citing state law as overriding the city's ability to protect abortions. But Hurtak disagreed, saying that the charter amendment related to the city's budgetary decisions, and therefore should be considered.

Had Hurtak's motion passed, there still would have been time for the city to figure out all of the legal nuances before a December meeting where council could've had a more in-depth discussion with the city legal team and vote again on it.

Still, yesterday's motion was shot down with little discussion.

"It's demoralizing," Hurtak told Creative Loafing Tampa Bay. "I mean, I am already according to the law now, a second class citizen.  And we expect that to get worse in the next legislative session. I could die just for my body doing a bodily function."

"I could die just for my body doing a bodily function."

And she took her colleagues' votes yesterday to heart.

"It's personal for me and it should be for every other woman in this city," Hurtak said.  "It's disheartening and frightening that I am not getting more support from councilmen to basically protect our lives."

Hurtak referenced news stories from around the country after the fall of Roe vs. Wade. People have found themselves in the midst of medical nightmares when trying to end pregnancies for an array of health reasons, including miscarriages. One woman in Texas, who was previously against abortion, switched sides after an abortion ban almost killed her during a pregnancy gone wrong. 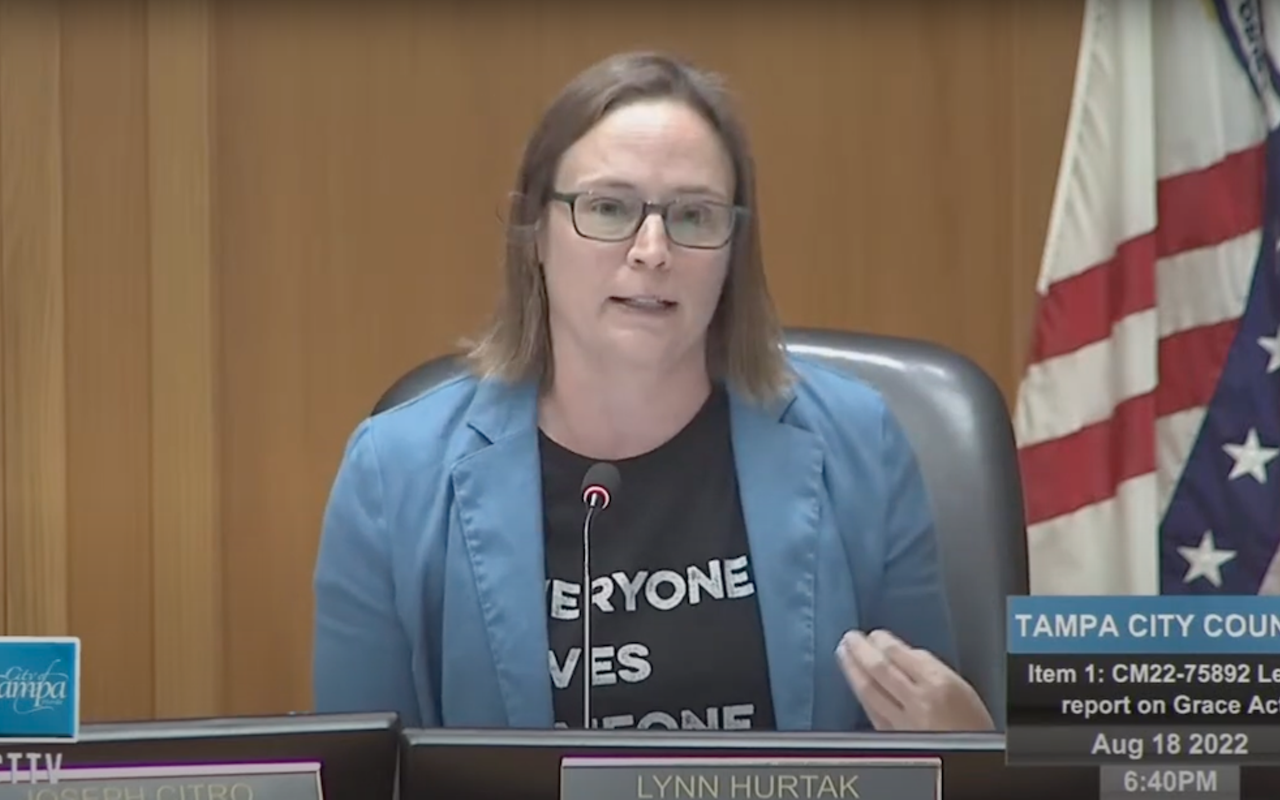 Tampa City Council passes abortion resolution, but councilwoman says it doesn't go far enough: The language was crafted by the city's legal team to cater to recent federal and state attacks on abortion.

In August, Mayor Jane Castor said publicly that arrests over abortion in Tampa are, "One hundred percent not going to happen."

"The Tampa Police Department is here to work with the community on the issues that they deem important, to keep the community safe [and] to ensure that people aren't victims of crime, not to go out and prosecute individuals for personal choices that they've made," Castor added. "So that's about as simple as it can get."

When asked today if Castor still stands by her statement, the city did not respond.

Still, the legal team that works under the mayor has pushed back against making any kind of legally binding protections for reproductive rights. In July, Hurtak presented the idea of a city ordinance that would offer protection, but city legal instead offered a non-binding resolution, which council approved in August. But the resolution crafted by the legal team made certain exceptions.

"This is what was added by the attorneys, 'except as may be required by state or federal law' which, in my opinion basically negates the whole point of this," Hurtak told council.

Today, Zelman responded to a request for comment on the reproductive rights situation via email.

"As I explained to  Council  yesterday, the subjects of health care and regulation of abortion clinics have been preempted to the state, and  the City cannot do indirectly what it cannot do directly," Zelman wrote. "For that and for other reasons, I cannot recommend that the City Council pass  the proposed charter ordinance on this subject."

When asked about suggested methods to protect reproductive rights,  Zelman said, "the most effective action is to lobby the elected officials  at the state level, and to vote for candidates for state office who will protect those rights."

In St. Petersburg, Councilman Richie Floyd has also proposed a discussion for a resolution, WMNF reports, but also included another proposal that could provide economic assistance to the Tampa Bay Abortion Fund.

Michelle Lambo, a local criminal defense attorney, said Tampa police should not focus at all on criminalizing abortions, and that there are far more pressing issues to take care of.

"Tampa has a gun violence problem," Lambo said. "They should be focusing on that and criminalizing abortion shouldn't even be on their list."

Tampa Police Department didn't respond to a request for comment on if Chief Mary O'Connor wanted make a statement about reproductive rights, and whether or not TPD will pursue abortions if the state orders the department to.

Tampa Democratic Socialists of America helped craft the original ordinance presented to council, and condemned the city councilmen who wouldn't take a stand with Hurtak.

In a Facebook post, TDSA said that the councilmen are, "clearly more concerned about their reelection campaigns than defending our rights from being viciously stripped away."

"They were presented with an opportunity to fight and instead they chose to be cowards," TDSA wrote. "Even though this vote failed there will continue to be more opportunities to win."

And Hurtak, although frustrated by a lack of support from some of her male colleagues, plans to carry on with her struggle for reproductive right protections.

"This is about basic human rights, and it is far from over," Hurtak said.