When people are shot by police, this Tampa couple helps families heal and organize

After winning their case against Hillsborough Sheriff, the Josephs give others a blueprint for fighting police brutality

Andrew and Deanna Joseph can feel the spirit of their son guiding them when they leave Tampa Bay to help families who are experiencing the crushing pain of losing a cherished loved one.

The memory of Andrew Joseph III is with them when they fly to other states, when they meet people wrapped in grief, when they confront police and hit the streets. No matter what obstacles they face, the couple knows their son is leading and protecting them.

Every time they meet a new family experiencing a tragedy akin to what they suffered nearly nine years ago, it returns them to that moment when they found out their first child died due to the negligence of the Hillsborough County Sheriff’s Department.

“It brings me back to stage one,” says Andrew.

It took more than eight years of fighting for the state to acknowledge that HCSO was responsible for their son’s 2014 death, when deputies wrongly ejected Andrew Joseph III from the Florida State Fairgrounds and lied by telling him he had to cross the interstate to find his ride home.

The 14-year-old boy was hit by a car while crossing I-4 and died that night. Last September, the family was awarded $15 million in their federal trial against the Sheriff. 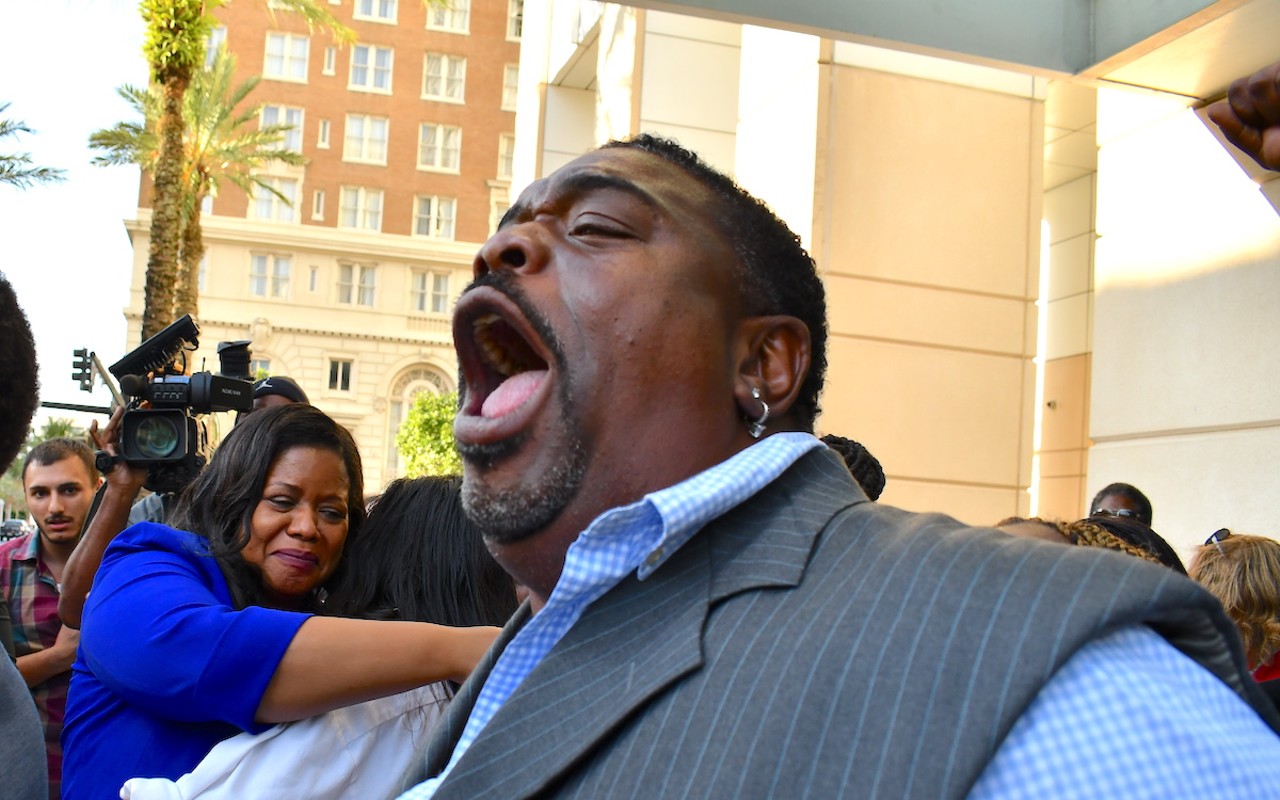 Family of Andrew Joseph III awarded $15 million in lawsuit against Hillsborough Sheriff, calls win a blow to qualified immunity: The Josephs said that their win is a 'blueprint' for families harmed by law enforcement.

Continuing the struggle for the sake of other families is a double edged sword, says Andrew. Revisiting the grief over and over again is daunting, but the act of standing for others who are hurting also acts as a form of therapy.

And working repeatedly through the process of healing from loss, along with seeking justice, provides an outlet for the lifelong effect the death of their son will have on the Josephs.

Sadly, there’s no shortage of families to fight for.

Since winning at trial, the Josephs have helped families with police killing and misconduct cases in Georgia, Mississippi, Louisiana, Ohio and other parts of the country. In 2022, police killings reached a record high of 1,176—or about 100 per month.

Yesterday, the couple celebrated Deanna’s 52nd birthday by flying to Houston, where they will spend four days helping the family of Jalen Randle, who was fatally shot in the back of the neck by a police officer last year.

The Randle family seeks answers and justice from the Houston Police Department, but many don’t know what to do when the moment strikes.

“When this type of thing happens to you, it’s a wilderness,” says Deanna. “You just don't know where to begin, but you know that you need to begin.”

The Joseph's fight for their son included years of rallies, launching a campaign for justice, learning how to talk to the press, educating themselves on their rights and navigating the legal system, among other efforts. Perhaps most importantly, they learned how to navigate the deep psychological trauma and shock of suddenly losing a loved one.

It’s not something you can learn in a book, the Josephs say, and families in such a position need others who can really understand what they’re going through, to help them heal and to fight.

“We're on the ground delivering a blueprint to these parents on how to pursue justice,” Andrew, 51, says.

Through the Andrew Joseph Foundation, which they formed after the death of their son, they collaborate with a network of justice seekers, including Black Lives Matter Grassroots and Families United for Justice.

The first 72 hours after the wrongful death of a family member are the most important, the Josephs say, so there are activists in just about every state that can get to a family within that timeframe and offer assistance.

When 15-year-old Jaheim McMillan was fatally shot in the head outside of a Family Dollar by police in Mississippi last October, boots were on the ground almost immediately. 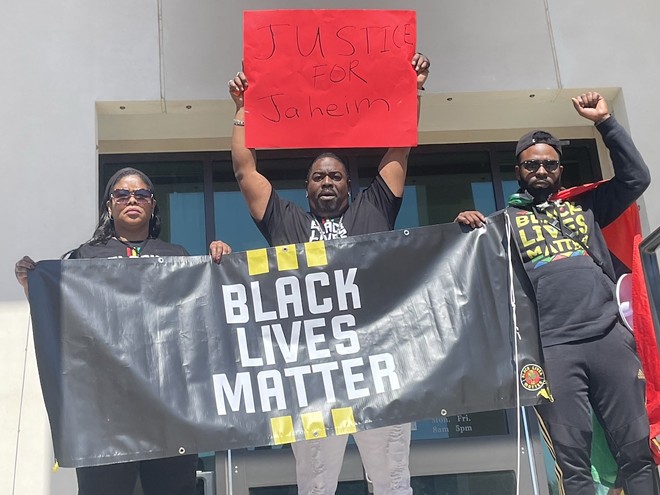 Deanna Joseph
The Josephs protest the killing of McMillan in Gulfport, Mississippi
Police in the Mississippi City of Gulfport claimed that McMillan was armed with a gun, but video shows that several witnesses to the shooting stayed at the scene to tell responding officers that it wasn’t true.

Since then, McMillan’s family has been fighting for answers and justice, with the Joseph family and others standing alongside them.

Activists want police body camera footage of the incident to be released, for the officer who shot the teenager to be arrested, and for the police chief to resign. A video from January 6 shows Andrew Joseph leading chants during a protest in front of the Family Dollar where McMillan was killed.

This is just one of several police-related incidents that the Joseph family is helping with.

Last November, Eric Holmes was shot and killed by officers in Clayton County, Georgia. A medical examiner confirmed that Holmes was shot in the back by a police officer who claimed the 19-year-old was driving a stolen vehicle. The officer was forced to resign, and the family wants charges to be pressed.

Last October, Rasheem Carter went to a police station in Taylorsville, Miss. to ask for a ride home. He said he was being stalked by white men who wanted to kill him. He was denied twice by police, and his skeletal remains were later found on a private property. Somehow, police in Taylorsville decide there was no foul play, and the community has risen up to demand a proper investigation.

For all of these families, the controversial legal doctrine known as “qualified immunity,” which protects police officers and departments from prosecution, prevents them ever seeing a day in court. HCSO tried to use qualified immunity in the Joseph case, but they fought against it and won. Now, they’re supporting Democratic Congresswoman Ayanna Pressley’s legislation to fully end qualified immunity.

For every case the Josephs encounter, they’re met with appreciation from the families they support.

“They’re just so grateful that there is someone who knows what they feel,” Deanna says.

But on the other hand, police and right-wingers present challenges.

“Everybody’s getting their license plates taken down by the police, and they try to do things to try and deter us from marching,” Andrew says.

During marches in Mississippi, they’ve had to face off with counter protestors waving confederate flags and Donald Trump flags who shouted slurs and threats at the crowd.

But the community that the Josephs are helping to build can’t be deterred by such threats. They’re growing, learning and training a younger generation to stand up for their rights.

On Feb. 18, the family will host a weekend of events to commemorate the nine-year anniversary of Andrew Joseph III’s death. Families that they’ve bonded with from around the country will join.

On that weekend, a 12-week training curriculum will be launched from the Brandon Regional library at 10:30 a.m. There, locals of all ages can learn the strategies and tactics that the Josephs and others have gained over the years.

The Josephs say they will continue their fight for as long as they can, but eventually, others will need to take up the mantle.

“The youth have to be the change we want to see,” Deanna says. “Eventually, all of this will be in their hands.”