Z-state: Your (political) guide to the zombie apocalypse 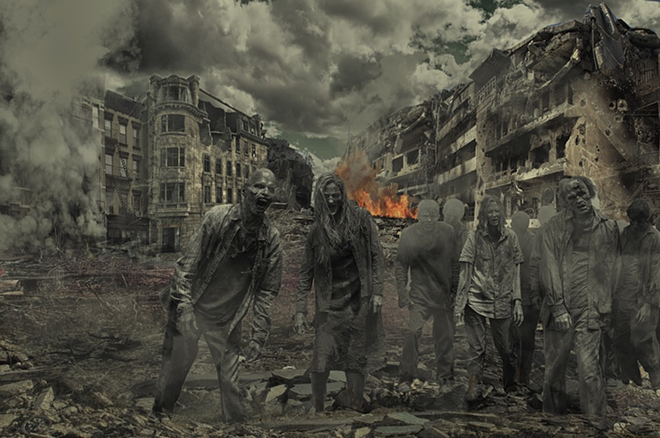 pixabay/Amhadreza89
Hmmm...The question of whether or not someone stood for the national anthem seems kind of silly after all...

Horror sub-genres seem to come in and out of vogue every decade or so. But zombie fiction appears to have endured like no other over the years. It's easy to see why. Cannibalistic undead humans shambling through what was once civilized society can be terrifying metaphors for a number of things that terrify us about ourselves: mindless consumerism, blind lust, drug addiction. The cause of a given work's zombie epidemic can also serve as its author's way of warning the reader/viewer about the possible consequences of disregarding our environment or failing to invest in, say, researching its root cause and potential antidote.

Some zombies are comically slow and somewhat easy to control or dispense of (Shaun of the Dead). Some are fast and zombify not from a virus, but fungus like cordyceps (The Girl With all the Gifts, The Last of Us), a strain of which happens to turn ants who come across it into rage zombies IRL (!). But all offer us a way to place ourselves — momentarily, of course — within a milieu in which the protagonists navigate a dystopian hellscape in which most humans — some of whom they knew and loved — have turned into ghastly monsters that want to chew on their innards. And often, it's the survivors who end up being the real monsters.

Of course, actually being plunged into an alternate reality where water, food, gas and other basics are scarce and highways are clogged — as many of us were last month as Hurricane Irma approached us — is not fun at all, especially for those who weren't able to prepare.

So in honor of this year's Horror Issue, we offer a zombie apocalypse survival guide. Because you never know. (Okay, hordes of people rising from the dead to feast on the living is probably not going to happen. But most of these things are probably a good idea anyway.)

Here are some practical tips to help you and your loved ones survive the undead onslaught.

Whether they are fast zombies or slow zombies, we'd like to repeat key advice we heard at the beginning of Zombieland. Get on that treadmill as often as you can. Fuel will be scarce and there will be zombies and probably psychopathic villains coming after you. Build up that endurance and while you're at it, do a pull-up or two. You never know what you'll have to climb in order to escape certain death. Plus, regular physical exercise is good for your brain. Your survival may depend on your being mentally sharp (or, if you're a Eugene from The Walking Dead, your ability to pretend you're sharp).

Here in Florida, the somehow-extant question of whether or not to shoot bears because some people are moving to remote environs that infringe on their habitats sparked a raging debate in 2015 and 2016. Though bears have been in the clear over the last couple of years, the specter of another proposed hunt always looms in 2018 and beyond. Because some people just can't be convinced that bears have a right to be here, too. But were the zombie apocalypse to occur here (and you know damn well Patient Zero would be from Florida), bears and other apex predators could help cull undead populations. The fact that you don't see bears, cougars or larger birds of prey picking off walkers on The Walking Dead despite it largely taking place in the rural south is a little annoying (but of course we still love it!). So if we preserve and restore their habitat (which is an awesome thing to do anyway), we could, in theory, preemptively control the zombie population.

We should probably all be doing this anyway because, you know, carbon emissions and stuffs. Despite pushback from power companies and the legislators they purchase, solar is expanding in the Sunshine State and it's more affordable than ever. You can get solar through a co-op, you can lease panels; it's easy. Get on that shit now. Because once the power grid goes down, there's no bringing it back. You're probably saying to yourself, hey, it's cool, I have a generator. Well, one, it will eventually run out of gas and, two, perhaps most importantly, the loud noise it makes will lead the herds of rotting, reanimated corpses directly to you. Solar is clean, it's quiet it's much more reliable in a post-apocalyptic wasteland than pretty much any other energy source.

This one is obvious, and you probably did this ahead of Hurricane Irma. You don't want to have to, say, sneak into an abandoned country club still crawling with walkers just to get a crusty swig of old mint schnapps. And make sure you go with something that's palatable at room temperature, since refrigeration is going to be a rarity. Grab some mixers with a long-ish shelf life while you're at it as well as...you know...nonperishable food and some seeds so you can grow stuff (by the way, you might want to Google “how to grow stuff” while you're at it).

That penny-ice thing everyone did

You know — so you can estimate how long it had been since the power went out at your place while you spent days scavenging and fighting off unspeakably hideous ghouls and renegade motorcycle gangs of former accountants. Remember, freeze the water in a Tupperware container and put the penny on top, then toss it right back into the fridge, just like you did before evacuating ahead of Irma. Hopefully the immense psychological trauma of having to bludgeon what had previously been the skull of your kid's second grade teacher won't keep you from having the presence of mind to check on the penny right when you get back.

This was a tough one. On one hand, having unbridled access to guns across the nation means that you can easily find these handy tools for dispensing of the undead and, as needed, defend yourself from guys in leather jackets just about anywhere — and feel like a real American in doing so. Buuut it also means that said leather jacket-sporting dudes will also have access to firearms they probably owned before the fall of civilization (and weren't really background-checked for), and they probably will have raided abandoned houses for guns well before you even thought about it. Also, swords and crossbows and garden tools and other items are, unlike firearms, quiet and they don't run out of ammo at exactly the wrong moment. So maybe if we err on the side of gun control now, when all hell breaks loose, there will be fewer sociopaths that already have their own small arsenal. Just a thought.

Maybe: adequately fund the CDC and EPA and stuff?

Remember when the ebola scare unfolded a few years back? And then Zika, now-ish? Well, the reason that neither had more of a toll in the U.S., probably, is that we each contribute some of our hard-earned dollars to the federal government, which in turn uses some of it to pay scientists to, like, do research with the goal of finding a cure or at least a vaccine as well as the mechanisms that can potentially cause a pandemic and whether hand sanitizer will cut it. Some of our money also goes toward preventing environmental conditions that threaten public health — it used to, anyway. Now it funds expensive trips to golf resorts. So, by supporting candidates who want to make sure agencies that conduct actual science are not underfunded, you could be staving off oblivion. By supporting candidates who think these agencies deserve the funding level of, like, a meth lab, well...you know.