Which Tampa Stoner Has the Best HalloWEED Costume?

Send a News Tip
This Halloween the local chapter of the National Organization for the Reform of Marijuana Laws, Suncoast NORML, is looking to find the best marijuana themed Halloween costume. They will be hosting the HalloWEED Costume Ball at Stone Soup Company this Friday, Oct. 28th, from 7 p.m.-10 p.m. in Ybor City. Join them for a night of spooky festivities and a costume contest that features some awesome prizes. The entertainment will include a night of live comedy and live music with a contest with who can wear the best cannabis themed costume. 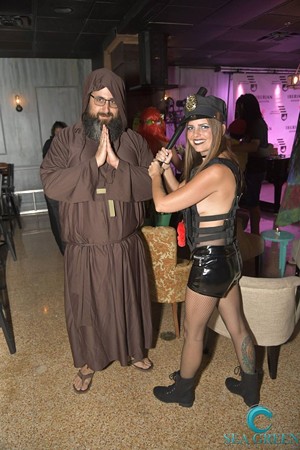 The last HalloWEED Costume Ball was held pre-pandemic, almost 4 years ago back in 2018, at the Iberian Rooster in Downtown St Petersburg. This year it will be held in the hidden Speakeasy located in the back of Stone Soup Company in Ybor City, and it couldn't have come at a better time! Legalization should be coming to Florida soon due to a new petition initiative that seems to be particularly well funded. Pushed by Florida native country music stars, The Bellamy Brothers, the initiative is called Smart and Safe Florida and it is currently the only initiative for legalization in the state! Florida needs awareness now more than ever! 19 States have legalized cannabis in the United States and Florida could very well be the next!

Tickets for the HalloWEED Costume Ball are only 10 dollars and entry into the contest is free! There is a cash prize for the winner of the contest and runner ups will receive some nifty smoking tools courtesy of Chillum Glass Gallery. All proceeds to the event will go to legalization efforts by Suncoast NORML!

“Our chapter's goal is to legalize cannabis,” said Suncoast NORML’s Executive Director Christopher Cano, “We aren’t going to do that without changing public opinion, no better way to do that than having a good time centered around the plant.”

In addition to the costume contest the HalloWEED Party will also include… stand up comedy provided by local Tampa based comedian Matt Fernandez and music provided by local artists such as DJ Dez, Greg Roy, and the appropriately named Smokeyy!