Since 2013, Tampa Police Department (TPD) has met with landlords to guide them through eight-hour trainings about crime and evictions.

During the trainings, police showed each landlord slides suggesting that those who commit crime are something other than human.

“Criminals are like weeds…” reads one of the slides from a presentation that was introduced by former TPD police chief Brian Dugan. “They root. They grow. They sprout out. They spread out. They choke out the good plants!”

The next slide reads, “The BEST way to kill a weed… Is to uproot it! (Eviction serves that purpose.)” A white person’s arm is shown in the background, pulling up a weed.

“No police department should be using this language about people in their city,” Stanley tells Creative Loafing Tampa Bay. Stanley wrote the books “How Fascism Works: The Politics of Us and Them” and “How Propaganda Works.”

What he means by pre-genocidal is that before any act of violence or ostracizing of a certain group of people, there is, “a need to legitimize treating them in a way that you shouldn’t treat citizens who you're sworn to protect,” Stanley says.

A new investigation by the Tampa Bay Times revealed that TPD teamed up with landlords to flag renters who committed crimes, including some who were arrested but never convicted of a crime. The language used in the aforementioned slides was part of the program’s training.

Of the 1,100 renters flagged by the program, about 90% were Black. Many of the crimes were petty (including panhandling). Mayor Jane Castor, who started the program when she was police chief, defended it to the Times, saying it reduced crime. But the Times pointed out that while crime went down at the places where the program was enacted, it was also going down across Tampa at the same time. The drop in crime at participating properties was in tandem with a 25% drop in violent and property crime reports across the city, according to the investigation.

Castor doubled down on her stance after public outcry, and sent a letter to the NAACP defending the program and explaining why Tampa would keep it going. Now, a nationwide coalition of legal and civil rights groups has called on Castor and the city to end the program, under threat of legal action. City Council chairman Orlando Gudes—who was a Tampa cop for nearly 26 years— also questioned the program, asking Castor to suspend it for 90 days for review.

Castor told the NAACP she’s heard the calls to suspend the program, but cited a nationwide increase in violent crime in her decision to ignore them. There is an increase in gun crime across the U.S., but experts still don’t agree on the exact reason why, and there’s no evidence the crime-free housing program stops that type of crime specifically.

“This is not the time to cut back on law enforcement’s collaboration with the community to keep Tampa safe,” Castor told the Hillsborough NAACP.

Stanley says that regardless of any “law and order” argument, being evicted for committing petty crimes is an archaic and brutal form of punishment.

“These are incredibly horrific sentences from the [Times investigation] you sent me, which involve treatment of humans who committed petty crimes; it’s reminiscent of ‘Les Miserables,’ or something you’d read by Dickens,” Stanley says.

“Les Miserables” by Victor Hugo described the degradation of poor people at the hands of a monarchic, harsh, class system in 19th century France. Charles Dickens wrote about similar struggles of the poor in England.

“This is straight out of the annals of the worst treatment of poor people in modern history,” Stanley adds. “And it just doesn’t add up—for one, punishments are supposed to fit the crime. And punishing people into desperation only increases crime. When people are desperate, they're going to commit more crime.”

Stanley explains that it should be obvious to police and Tampa officials that criminals are not another species. “They're human beings who do things, but they never lose their status as a human being,” he says.

CL reached out to the city’s communications team to see if they have a response to Stanley’s condemnation of the program and its language, but did not receive a response. We also emailed TPD with the same question, and asked if the presentation’s “weeds” language came from the national crime-free housing program, or if it was added to the presentation by TPD, but did not receive a response. We’ll update this post if we hear back.

Stanley highlighted the racial aspect of the program, saying it reminds him of “ethnic cleansing.”

“You're driving people from their own cities, their homes, and you do so by essentially criminalizing poverty, and treating them in ways you would never treat other types of people,” Stanley says. “No one's going to see a whole middle class white family evicted whose kids were caught shoplifting. That will never happen.” 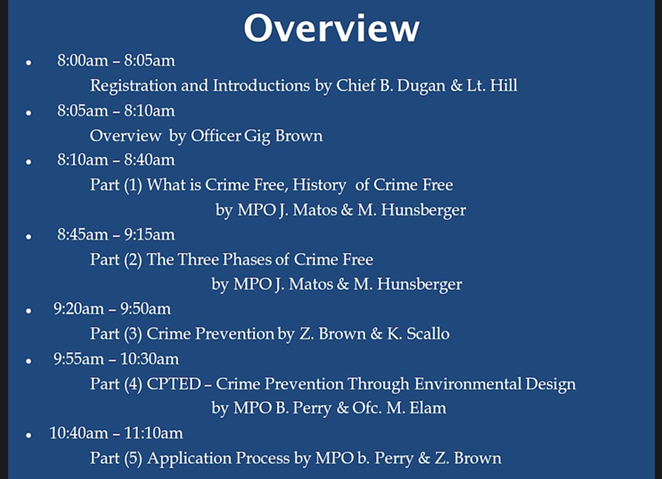 When asked why anyone would defend such a program, Stanley referred to a disturbing past.

“This is the history of politics in the United States, you know, racial politics sells, and that's how you win elections,” Stanley says. “You vilify a group like ‘criminals’ and say you're going to crack down on them to fight crime.”

Stanley referred to U.S. politicians’ disparate reactions to the opioid crisis—a mainly white issue that was met with empathy and care—versus the crack cocaine crisis, which was met with a “war on crime.”

Tampa is not alone in its participation in crime-free multi housing programs. Since 1992, when the program started by a police officer in Arizona, similar programs have spread across the country and been the matter of controversy in other states for targeting renters of color. The American Civil Liberties union has sued in several cities based on the racial aspect of the program.

“You know, we've lost sight of our humanity when we do this, when we call our fellow citizens weeds,” Stanley says, “And fascism is an ideology that justifies this anti-humanity. It's that it's all about force and violence, and, ‘law and order.’” 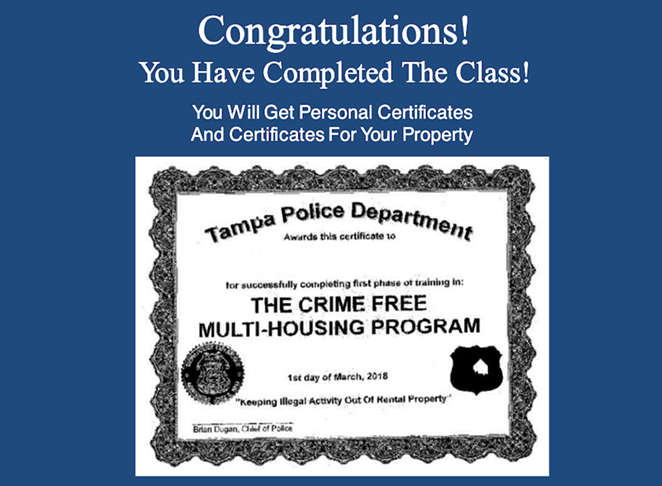