The transformation of the former dolphin habitat into a cutting-edge manatee rehab and research facility is expected to cost $10 million. 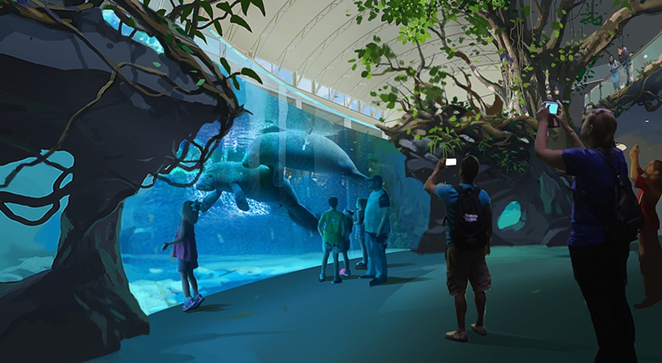 Ten years ago, Clearwater Marine Aquarium was overwhelmed by visitors after being thrust into the spotlight by the international stardom of its rescue dolphin Winter.

As attendance and awareness of the Gulf Coast aquarium rose, so did the need to update many of the habitats at the facility. An $80 million upgrade and expansion to the waterfront aquarium was launched. Now, as the aquarium celebrates the 10th anniversary of the Hollywood film that made it famous and as it readies for its 50th anniversary next year, it's approaching the culmination of those plans.

A massive new dolphin complex gives Winter, Hope, and their less-known roommates the space needed to thrive while allowing for easier viewing and interactions by guests. This multi-level habitat is triple the size of the former dolphin home. It holds a whopping 1.5 million gallons of natural seawater, pulled and filtered from the nearby Clearwater Bay. Despite opening in the heat of the pandemic last summer, the new facility soon proved its worth, thanks in part to its spacious and well-ventilated outdoor viewing areas.

The aquarium rolled out its next major addition with a massive exhibition space. The first exhibit to use that space was Whales: Living With Giants. This 20,000 square foot interactive experience educated guests on the important research the aquarium is helping lead along Florida’s coast. This research led to the discovery of a newly documented whale species, the Gulf of Mexico Bryde's whale (Rice's whale), that is critically endangered and risks extinction within our lifetimes. Guests can witness the beauty of whales in the wild thanks to a VR experience.

This new facility is the evolution of a manatee rehabilitation center the aquarium announced in July. That facility is part of a complex that was readying to open in late summer 2019 when a pod of pilot whales were stranded in shallow water at Redington Beach. Already a leader in whale research, the aquarium found itself once again in the spotlight as it looked at another difficult rehabilitation, having to care for two of the five whales at a facility that had opened just days prior to the whales arriving.

All five whales were eventually released, and the facility began treating other marine animals in need. A documentary on the successful rescue and rehabilitation effort has its world premiere at the aquarium this month. Guests to the aquarium to catch a screening of the film in a brand-new, 300-seat theater. Daily screenings of Dolphin Tale and Dolphin Tale 2 are also occurring in the theater as part of the ten-year anniversary of the debut of the original film. The theater is designed to also host lectures and other in-person events.

The ongoing Unusual Mortality Event  among manatees occurring on the East Coast of Florida has overwhelmed many manatee rescue facilities, so the Tarpon Springs rehab center will focus on ensuring as many manatees as possible are saved.

Rescue manatees with injuries that prevent them from returning to the wild will find a new permanent home in the recently announced manatee exhibit. The facility at the aquarium will also offer twelve more “beds” for manatees in need. The natural-looking manatee exhibit will feature multi-level viewing windows, faux cypress trees, and opportunities for children to explore to exhibit via kid-focused viewing windows.

Clearwater Marine Aquarium still has a big challenge ahead as it begins fundraisers efforts for the new facility, but the past decade has shown this is one nonprofit that thrives under pressure.

The Clearwater Marine Aquarium is open daily. Guests are encouraged to purchase tickets ahead of time to ensure access while the aquarium continues with limited capacity for social distancing.

This post originally appeared at our sibling publication Orlando Weekly.