Ace’s old friends in Kiss were just in Tampa this weekend.

Just song lyrics came out of Alice Cooper’s mouth Monday night, but when one does a show that includes a guillotine, inflatable babies and demons, and former Kiss (stylized “KISS”) guitarist Ace Frehley, why throw in banter?

The co-headlining tour featuring the two Rock and Roll Hall Of Fame inductees has been in the works for quite a few years now. In 2018, Frehley mentioned the tour taking place in the summer of 2019. In the end, Coop toured with Halestorm in the summer of ’19, and Ace carried on with a solo tour, partially promoting his sorta-eponymous 2018 album, Spaceman.

Outdoor venues are really our best bet at the moment, and per LiveNation’s rules, Tampa’s MidFlorida Credit Union Amphitheatre requires a negative COVID-19 test or proof vaccination or. Not to mention that this was set to be a massive show, so a venue under Clearwater’s Ruth Eckerd Hall umbrella wasn’t in the cards—despite it being both artists’ go-to when they’re in the area. Even so, the Amp never reached capacity on Monday night, and there were no attendees sitting on the lawn.

At 7:26 p.m.—four minutes before the promised showtime—“Also Sprach Zarathustra” blared through the speakers, and someone came out to scream a slightly altered version of Kiss’ “you wanted the best” opening—rewritten for introducing Ace with. The Spaceman opened his set with “Rocket Ride,” off of Kiss’ Alive II. As most everyone in the far less-than-packed venue low-key hoped, his set focused primarily on songs by his old band, and very few of his solo ventures.

“Parasite” was where Ace’s wicked guitar work began, and “Rip It Out,'' the first track from his first solo album, was the only time he even hinted that he did original work as a solo artist. But it was at that point in his set where he took a break from that part of his life, and launched into a few covers of some favorite bands—both of which appeared on his latest all-covers album, Origins Vol. 2. First up was “Never in My Life,” from Woodstock-era hard rock band Mountain, likely a tribute to original guitarist Leslie West, who died in December. Led Zeppelin’s “Good Times Bad Times” was to follow, and Ace went on to imitate Jimmy Page’s epic solo almost perfectly.

Like everyone, Ace will never take performing live for granted again. “The Ace is back, and I told you so!” He called out. In a surprising turn of events, he referred to how vaccines, believe it or not, are effective. “Everybody got their shots?” he asked, and received only limited positive reactions. No booing or anything, but in a venue where vaccine cards or negative COVID-19 tests were required, it was more than fair to spout that question.

Ace was also kind enough to salute the casual Kiss fans with a rendition of “Detroit Rock City,” with vocals courtesy of guitarist Ryan Cook. His version surely made up for Kiss’ accidental clusterfuck of a version played on the same stage two nights prior, which made a few rock and roll headlines on Monday. Ace also changed “New York Groove” to “Tampa Groove,” and made sure to mention how “Shock Me” was written about his infamous 1976 near-electrocution incident in Lakeland. Then came what every Kiss fan in the venue was waiting for: His 8-minute solo, which included him whammy-barring smoke out of his orange Les Paul before swapping in a black Gibson model for the remainder of his set. Before closing up with “Deuce,” Ace admitted that he wrote another addition to his setlist, “Cold Gin,” on a subway in New York. “I mean, who writes a song on a subway? I think it turned out OK,” he joked.

It took another 20-or-so minutes before Alice Cooper and his own band took the stage, or should we say, self-described nightmare castle. Around 8:50 p.m., a massive curtain with Coop’s eyes glowing red, dropped to reveal his band spread out across a literal castle setting, kicking into “Feed My Frankenstein” (yep, just like in "Wayne’s World"), and the 73-year old king of shock rock slowly emerged from the onstage castle door, dressed in his trademark top hat and black regalia. A better known hit also used in the film world was quick to follow—“No More Mr. Nice Guy” was, as per usual in Coop’s recent setlists, gotten out of the way early. But no one’s complaining, because that meant there was more room for deeper cuts and lesser known songs.

This is the practically the same “Ol’ Black Eyes Is Back” tour that was brought to Clearwater in November 2019. However, while most of Monday night’s show was pretty identical to what went down two years ago, a few major changes were still made. In place of last go-round’s “Raped and Freezin’” (sad, but fair.) was 1990’s “Hey Stoopid,” off the album of the same name. And two new songs, “Go Man Go”—which would segue into “Under My Wheels”—and later, a cover of The Velvet Underground’s “Rock & Roll” likely left some of Coop’s older fans shocked at the fact that he still records new music, and doesn’t bring home the bacon just from touring.

Like many of Coop’s fellow rock legends, he recorded an album to bring some joy to his fans during the pandemic. Detroit Stories features guest spots from Joe Bonamassa, Mark Farner, and—like on his last few LPs—all three living members of the original Alice Cooper band. You know, from the Love It To Death and Killer days.

After a trifecta of hits (“I’m Eighteen,” “Poison,” “Billion Dollar Babies.”) came a Welcome To My Nightmare segment. Coop departed from the castle prop without any fanfare at the end of “My Stars,” and let his backing band stall the crowd on “Devil’s Food” and then, a jam session following the structure, instrumentation, and improvised melodies of “The Black Widow.” Drummer Glen Sobel got his drum solo, which is easily the highlight of the “Black Widow Jam,” and every guitarist on stage took individual charge at one point or another. 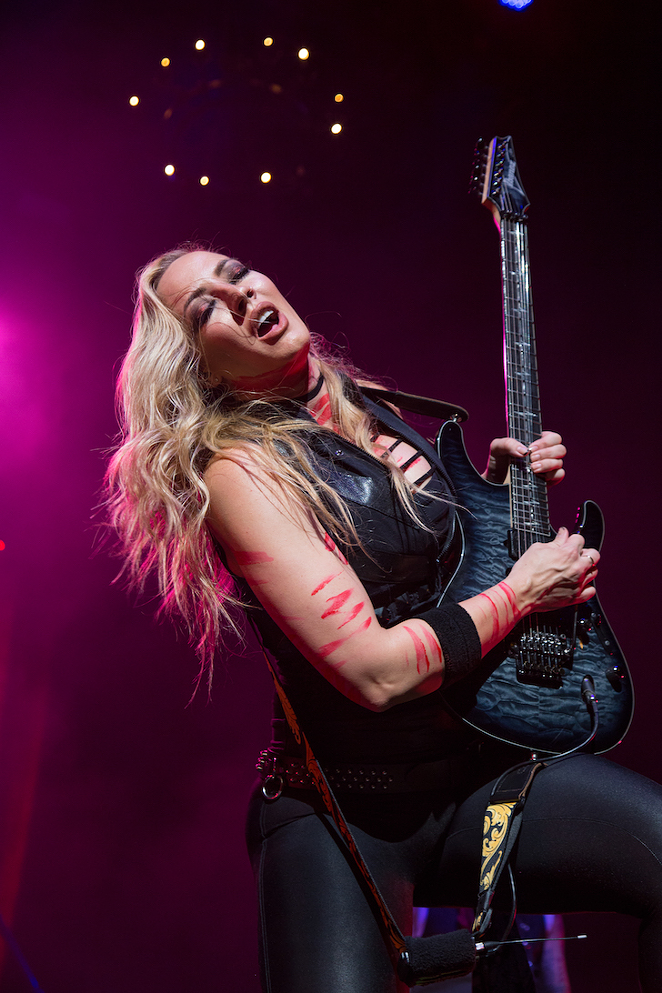 Speaking of the current Alice Cooper Band, let’s talk about the badass who made her guitar cry out the solo that introduced “Roses On White Lace.”

The entire backing band is an unbelievably solid and energetic group of musicians to work with. But its lead guitarist, Nita Strauss (yes, she is a descendant of Johann Strauss) is truly a force to be reckoned with. She’s still a newcomer to Cooper’s band—having joined in 2014, but her playing style is unlike any you’ve ever seen before. Strauss already has her custom models on the market. She is also known to regularly shred at WWE events—whether you can indulge yourself in that or not.

Once the jam had ended, Coop was dragged out in a straitjacket by two of his adult-sized babies, so he could rasp out another Nightmare cut, “Steven.” Joining him to strut around the stage was his wife of 45 years, Sheryl Goddard, who was one of his dancers from the Welcome To My Nightmare tour of 1975. She would show little sympathy when it was time for Coop’s (temporary) execution by guillotine, and was instead on the other side of the stage, encouraging the crowd to get louder. Once Coop had “died,” Sheryl reached into the basket underneath the guillotine, picked up his head, and began prancing around the stage with it, whilst the Alice Cooper Band launched into “I Love The Dead.”

Coop survived his execution, and managed to burst out of an onstage coffin to wrap up his main set with “Escape” and “Teenage Frankenstein,” the latter of which had a massive…teenage Frankenstein-esque character walk around stage for a brief time. As per usual, Coop’s encore was “School’s Out,” but this time around, it was a bit more special.

Ace Frehley was hanging out backstage, so why not have him come out and help Coop top off his semi-annual stop in the Tampa Bay Area?

“It’s almost Halloween! But we always Halloween!” Coop declared during his band’s bows—right before being presented with a Devil Rays (yeah, Devil Rays) shirt with his name on the back.

What a spooky, yet magnificent way to live.