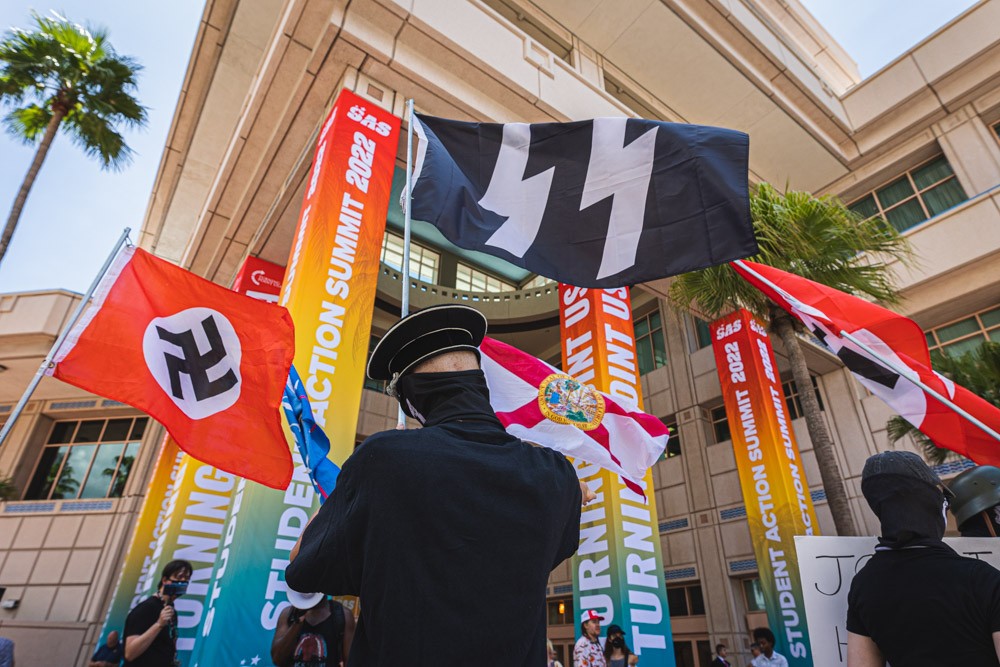 The extremist groups arrived after more than 100 protesters marched from Lykes Gaslight Square Park to the convention center to speak out against recent actions by the Supreme Court, especially the overturning of Roe V. Wade.

The group distributed flyers, one of which said "every single aspect of abortion is Jewish."

The flyers say they were distributed by the Goyim Defense League, which the Anti-Defamation League describes as an extremist terrorist organization that was responsible for at least 74 anti-semitic propaganda incidents in 2021.

Turning Point spokesperson Andrew Kolvet told CL that TPUSA had no idea who the Nazi groups were or why they turned up outside the convention.

"They have nothing to do with TPUSA, our event, or our students. Our students took the mature route and vacated the space the Nazi flag holders were in. Once that happened, they left," Kolvet said, adding that TPUSA students also argued with the Nazis before disengaging.

Florida has seen a rise in fascist activity in recent months. In Orlando, a neo-Nazi group assaulted civilians during a demonstration, and a Nazi group named Atomwaffen made a bomb threat in Daytona Beach. 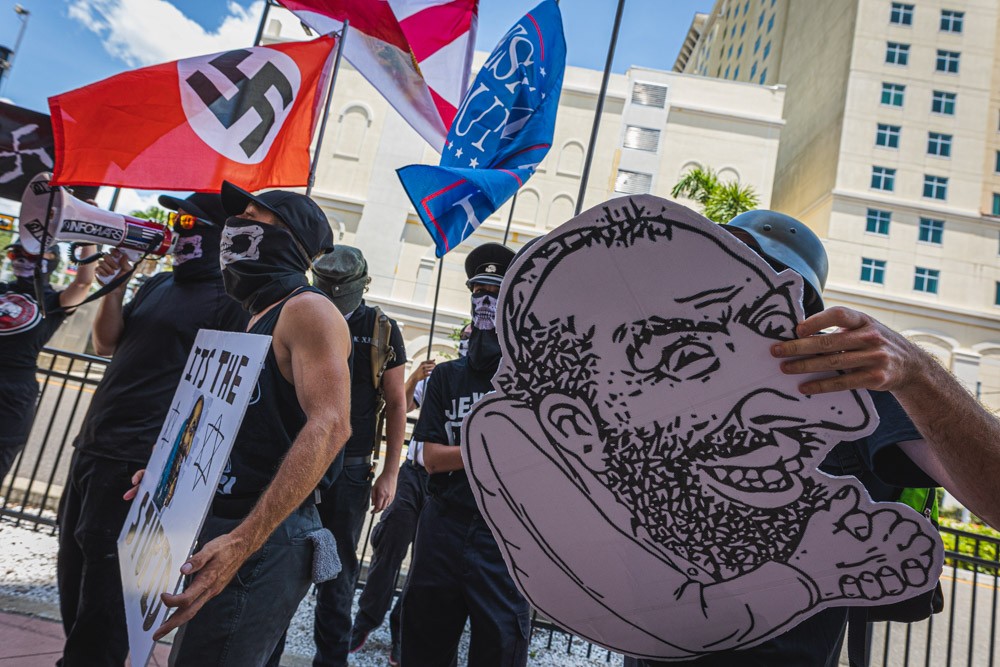 Photo by Dave Decker
Today's summit counter protestors, which included members of Women's Voices for Southwest Florida and Tampa Bay Community Action Committee, among others, called TPUSA fascist in its rhetoric, and urged the need to confront fascism anywhere it exists.

The two groups clashed over the Roe V. Wade issue and more when the protestors marched to the Tampa Convention Center, where the TPUSA summit is being held.

When the protest crowd arrived in front of the convention center, the right wingers entered the crowd and began antagonizing protesters.

One man dressed as Uncle Sam entered the crowd and attempted to put his hat over a woman's face and megaphone, thus striking her with his hat. Uncle Sam popped up again later when he pushed his way into the crowd, leading to a clash. 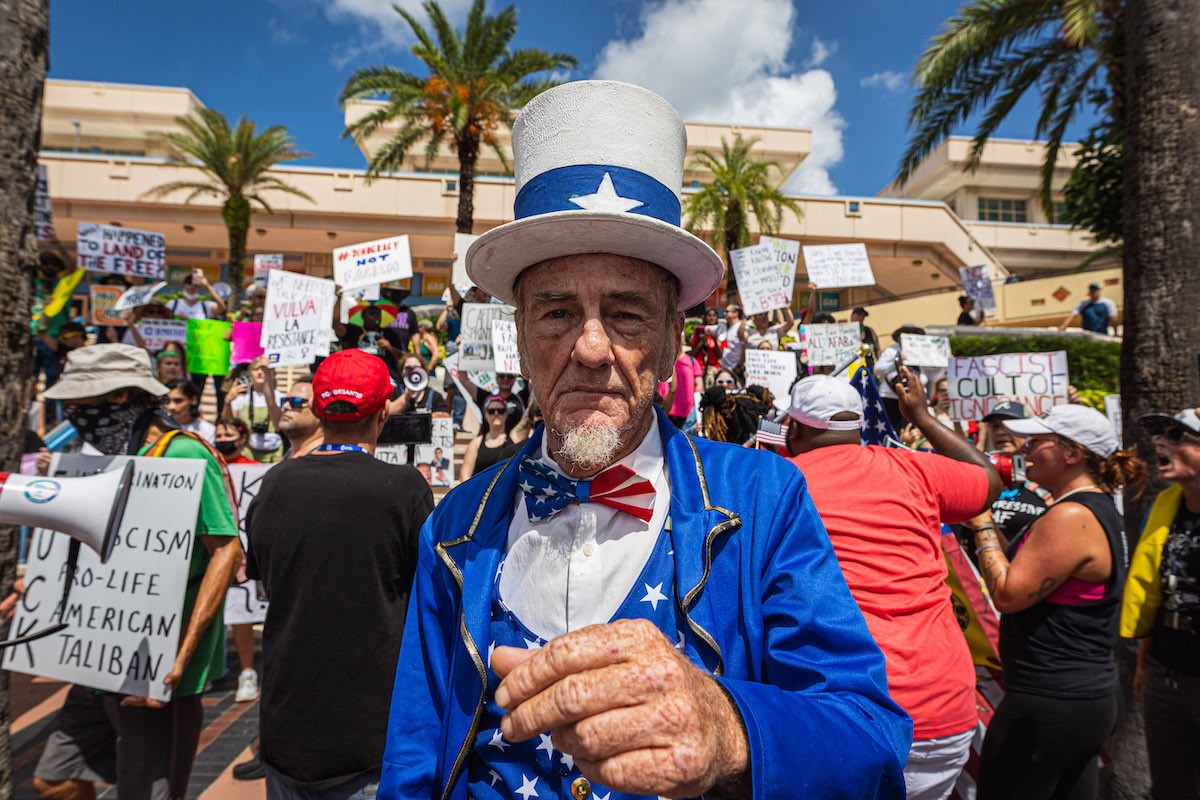 Photo by Dave Decker
Near the very end of a video from Women's Voices of SW Florida, Uncle Sam can be seen standing above a member of Tampa Bay Community Action Committee who had been pushed to the ground. Tampa Police let the Uncle Sam impersonator go and did not comment on why they released him.

A right wing self-described "comedian" named Alex Stein also entered the crowd and called all of the protesters "baby killers" as he ripped signs out of women's hands and pushed his way into the crowd. He even posted video of him doing this on Twitter. TPD removed Stein from the crowd and one officer told him, "You can't be physically fighting people," but still refused to take action against him.

When asked why TPD just let him go with little incident—even with several witnesses, victims, and video of him instigating—officer D.J. Rhodes noted that protestors were on the walkway.

"Is it a crime for [him] to kinda walk down and kind of scoot by?" Rhodes asked before saying that the protesters were blocking the sidewalk. 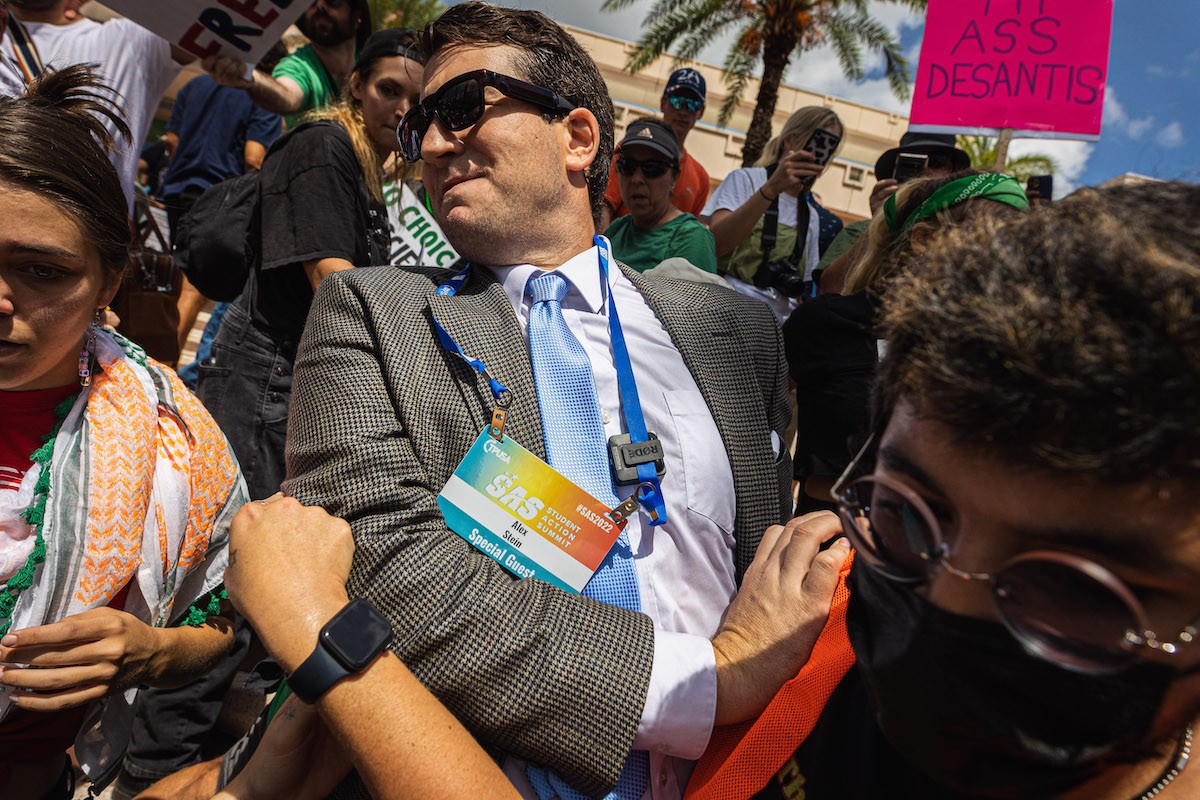 Photo by Dave Decker
After demonstrating for about a half hour, the protesters marched back to Gaslight Park, and were trolled on the way back by white men with cameras. The trolls trailed off, and at the park, the protestors were able to give each other words of encouragement and support before the event ended.

In a text message to CL, City of Tampa Spokesperson Adam Smith said, "The First Amendment applies to everyone. It's a sad time for our country when people from the darkest fringes of society feel comfortable openly expressing their vile hate, but it's understandable why many media outlets refuse to do their bidding by publicizing this garbage."

But Sen. Janet Cruz—whose daughter is partner to Smith's boss, Tampa Mayor Jane Castor—struck a different tone and wrote that Tampa was founded on diversity and inclusion. "I’ll be dammed if Nazis and Proud Boys waltz through our City and spew such repulsive speech. Words have power and we will NOT accept this in our backyard. All of us must stand up and make clear that we reject this bigoted display," she wrote on Twitter.

Actually addressing hate groups in some of Tampa's busiest entertainment districts is a change from recent inaction by the city. In May 2021, when Trump floatilla organizers flashed "white power" signs in an Ybor City Bar, Mayor Castor's office twice ignored requests for a comment beyond a generic "hate has no home here." Two months later, Smith similarly declined comment after Proud Boys marched through downtown Tampa flashing "white power" symbols.

Mike Igel, Chairman of the Florida Holocaust Museum in St. Petersburg, called the display of the Nazi and SS flags an "indefensible act of pure hatred." He called on everyone, regardless of political affiliation, to condemn the blatant anti semitism in the strongest possible terms.

The convention wraps tomorrow with an agenda that includes a panel called "Queer Theory and the Post Truth Progressives," an appearance from Academy of the Holy Names alum and former Trump Press Secretary Kayleigh McEnany, plus others.

This is a developing post, with more photos of the protests and TPUSA summit added as the weekend comes to a close.
Scroll down to view images 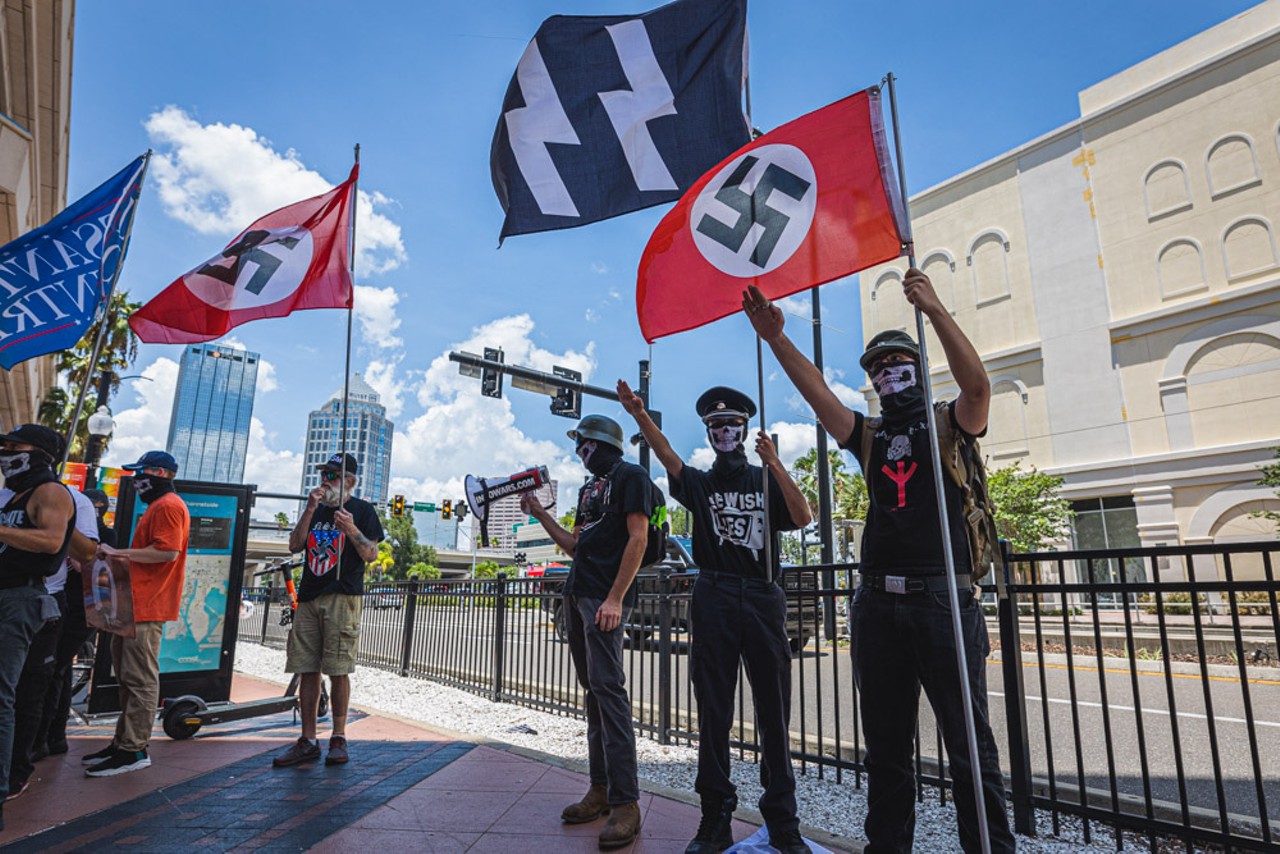 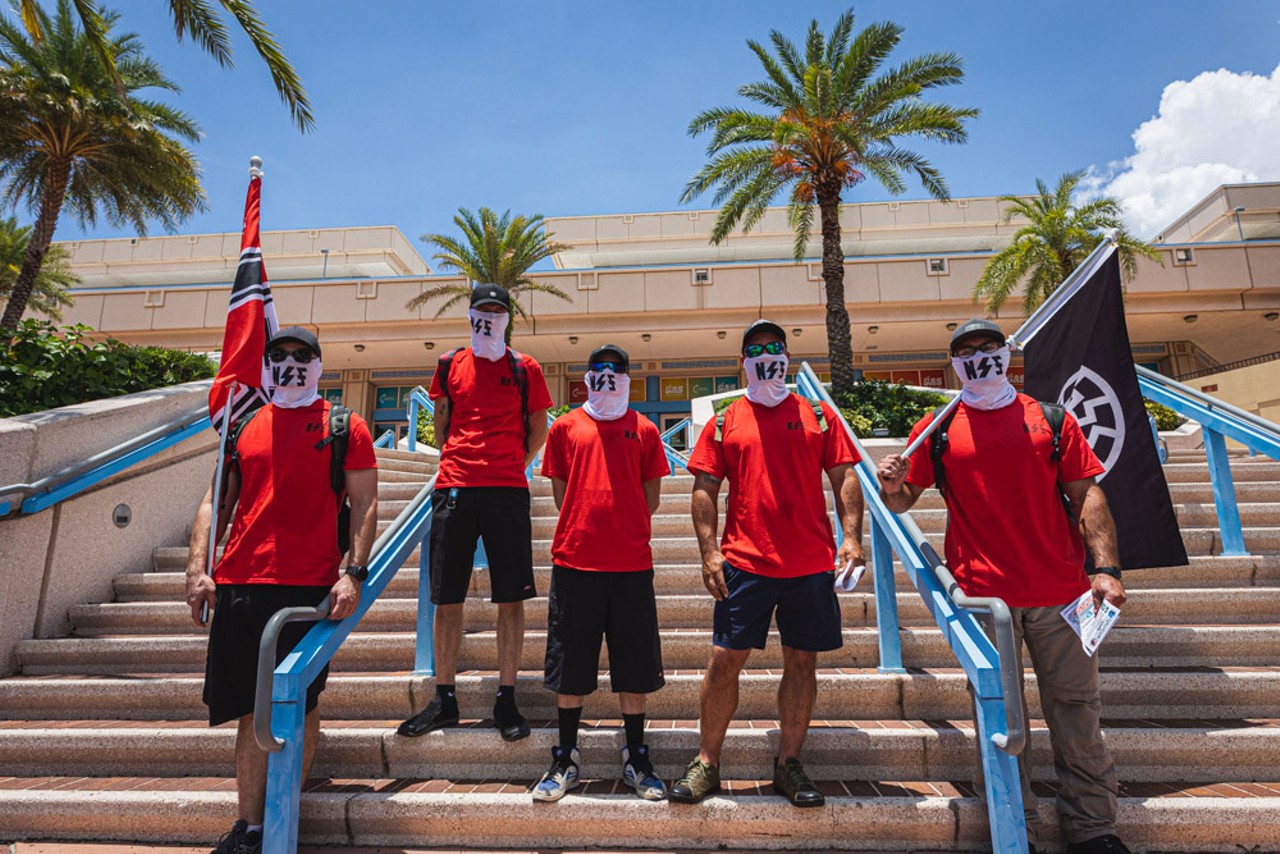 Photo by Dave Decker
Neo-Nazi group outside the Turning Point USA Student Action Summit at day two of the the Tampa Convention Center on July 23, 2022. 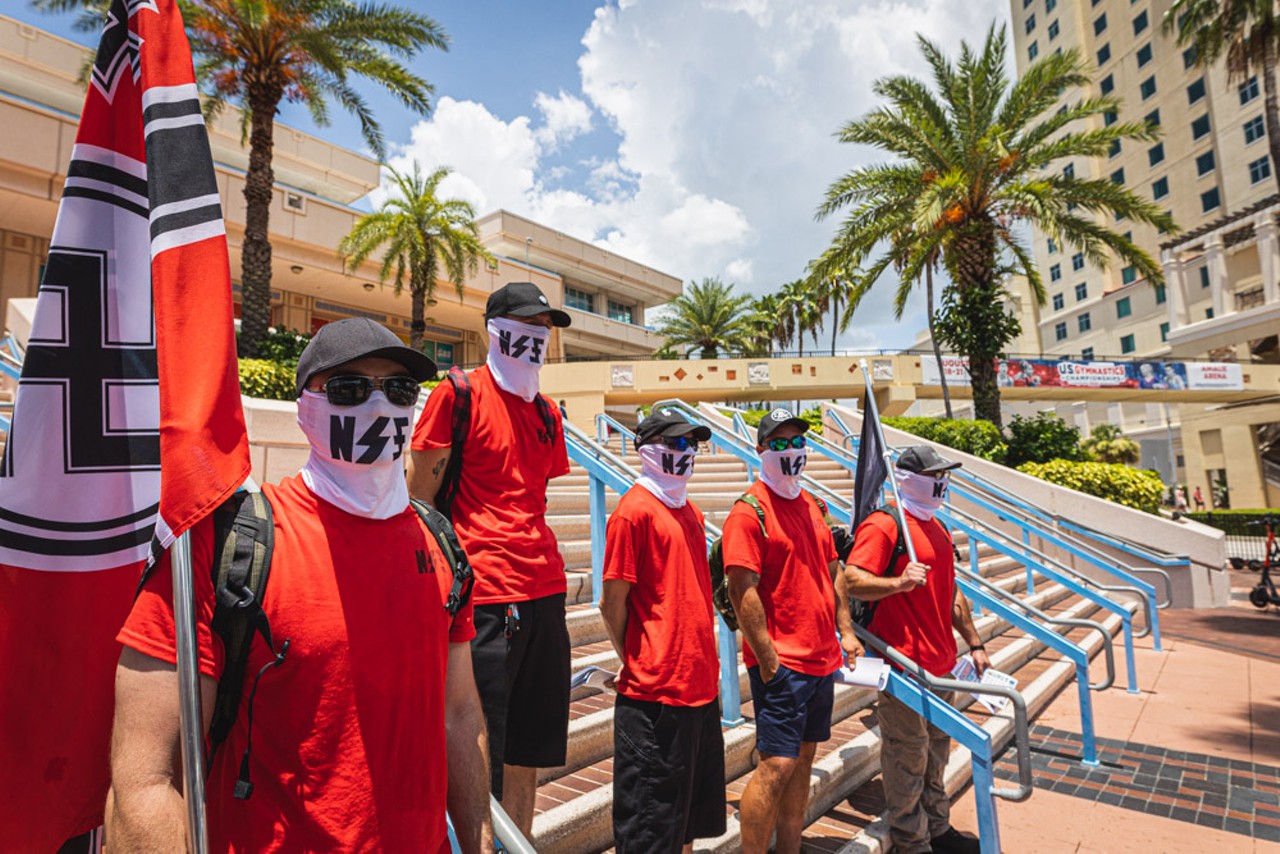 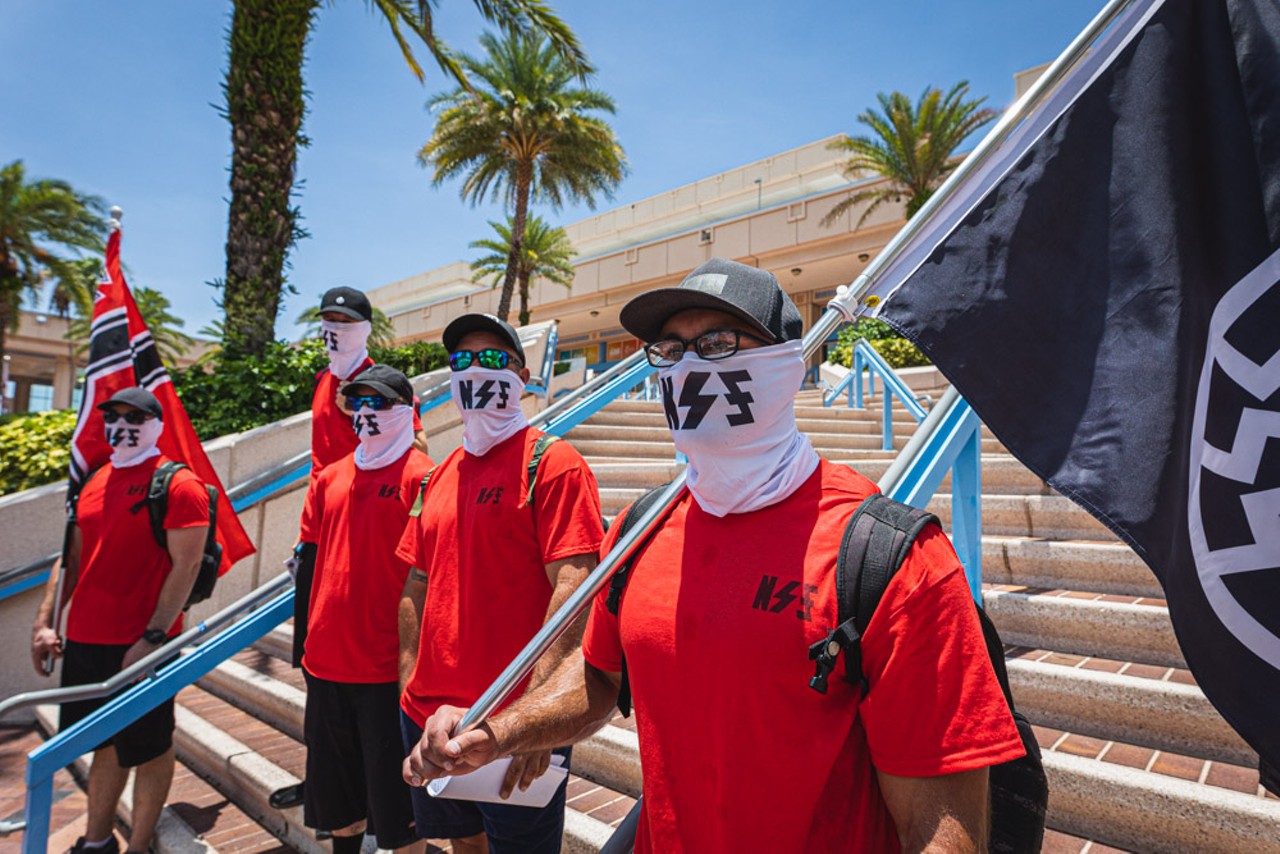 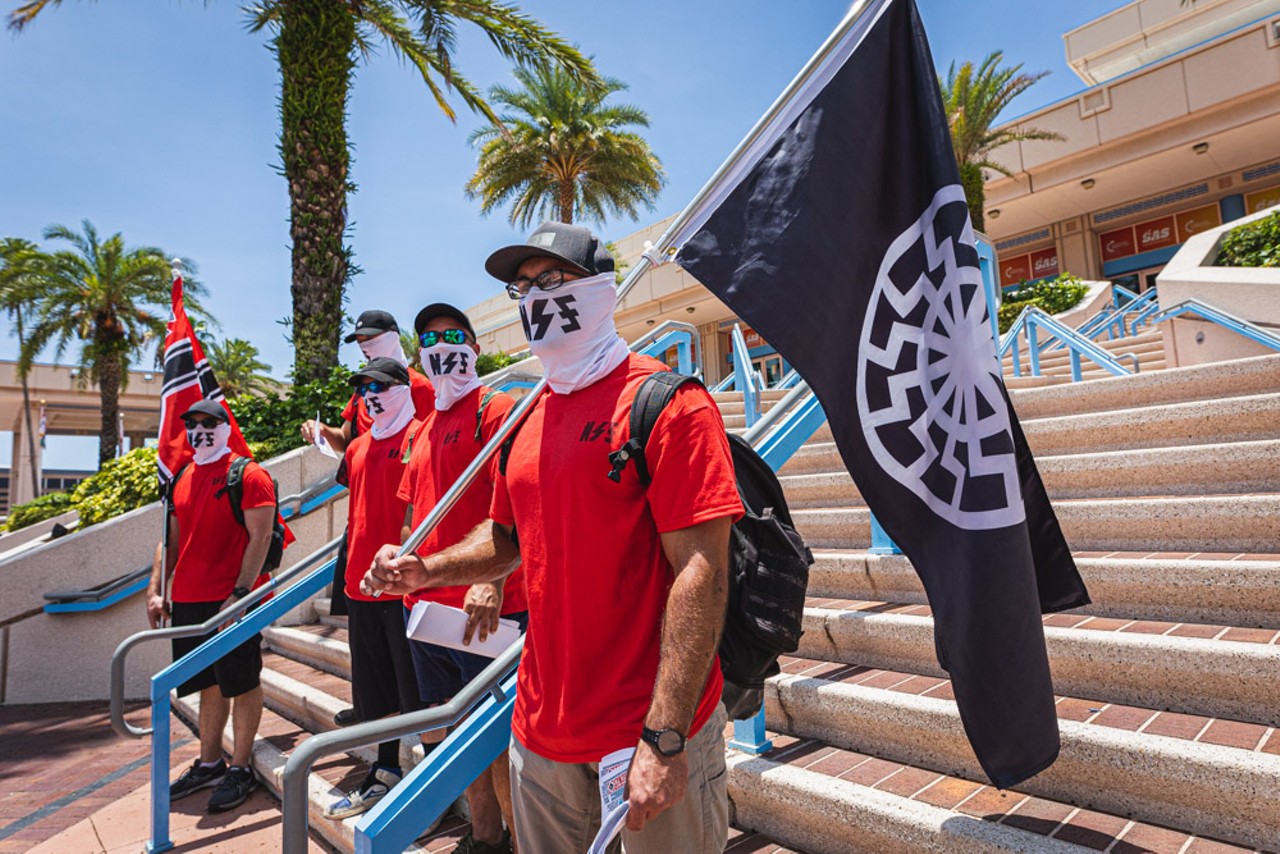 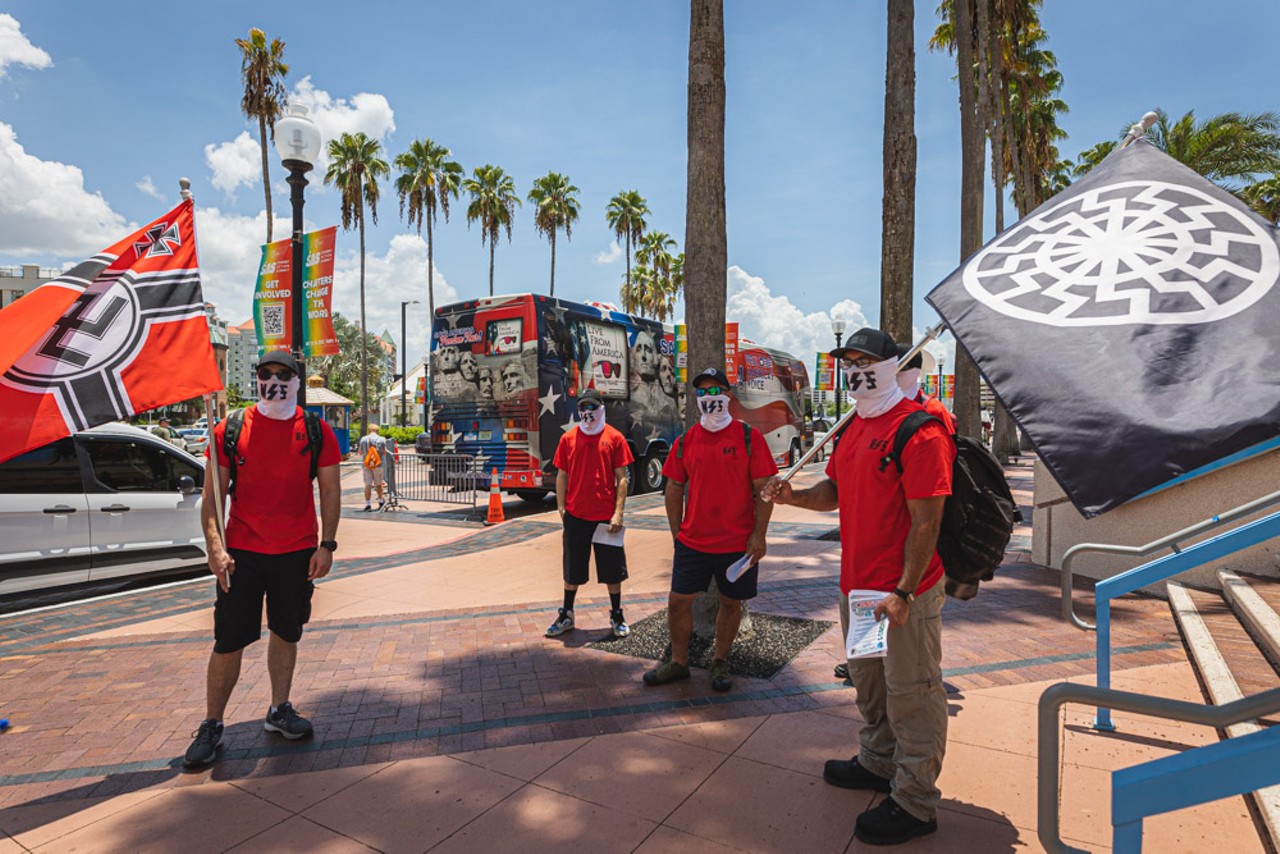 TPUSA was surprised its Tampa summit attracted neo-Nazis. It shouldn’t have been 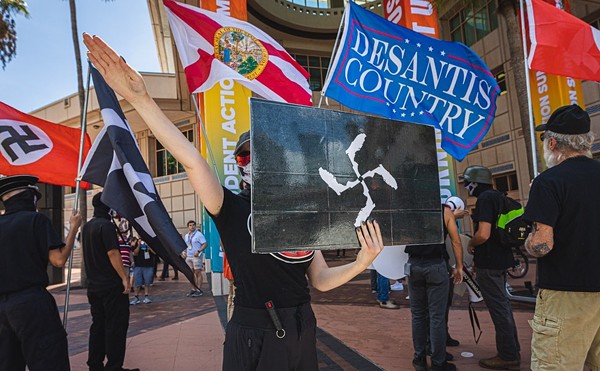 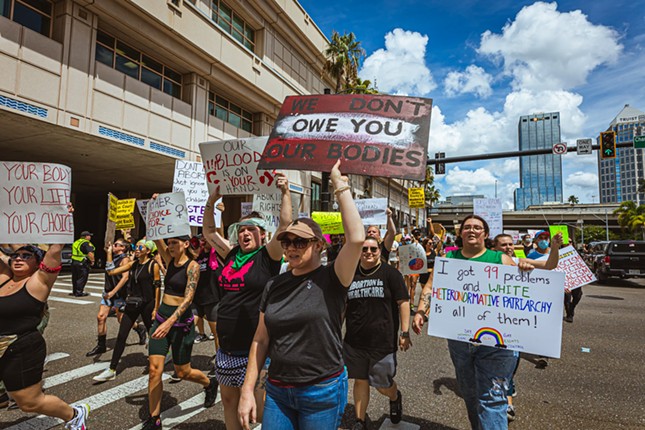