Restaurant review: Crabby? Not a bit at Crabby's Dockside

Crabby Bill’s in Clearwater Beach was a quintessential beach bar. It had patina. You could feel the years of salt air, spilled beer and the ubiquitous sense of the ghost of fried foods past. The haunted kid in The Sixth Sense might proclaim, “I see onion rings.” But with the rise of the tiered-wedding-cake neighbor that houses Salt Cracker Fish Camp and Marina Cantina, it was time for a facelift and a name change.

Not to be outdone, Crabby’s Dockside rises to three stories more reminiscent of a cruise ship than a beach bar. The first tier is covered with bright red umbrellas. The second has huge windows and AC for those who can’t stand the heat. And the third is wide open with direct sunset views (and exposure) only previously available across the crowded marina parking lot. Speaking of parking (despite what the meters say), it’s free after 6 p.m., with a two-hour pass available inside if you’re there early.

The dining formula hasn't changed. For those seeking affordable drinks and an array of the foods that made Crabby’s famous, they’re still here — alligator bites, killer conch fritters, clams, mussels and oysters.

Happy hour specials also abide. Who can resist Crabby’s “crab trap bucket” for $10? If you want to build a sand castle, but you forgot your tools, all you need to do is chug a pail of Cruzan coconut, mango, passion and pineapple rums blended with orange and pineapple juice with a splash of cranberry. Then, unless you’re up to your elbows in easy-peel shrimp with Old Bay seasoning covering your fingers, you can waddle across the street and have your way with the white sand as it meets the gulf waves.

Speaking of easy peels, the large, wild-caught royal red shrimp are steamed and split to make eating much simpler. While I enjoy them hot, diners may order cold ones if they’re in a shrimp cocktail state of mind.

Crabby’s hand-cut sweet onion rings feature a light, airy batter deep-fried to golden brown. This may encourage you to overindulge, since there’s not a hint of greasiness; they’re tasty even without creamy stone sauce, which provides a hint of spice.

The Florida-style crab cake comes grilled or fried. It’s a soft creation with shreds rather than lumps of crab, but is nicely caramelized and appropriate for the price. My posse likes to share, so it provides a few bites to give you a hit of crab before the entrees arrive.

We choose a pitcher of white sangria, too, because the picture is enticing. Crabby’s starts with fresh muddled strawberries, Skyy Georgia Peach vodka and white wine, adding apple juice, peach schnapps, agave nectar and a splash of pineapple juice. The result is very refreshing, though there’s lots of ice that dilutes it quickly. Choose this for a cooling sip; a buzz lies elsewhere — unless you’re not sharing.

Our entree choices fit the scene. Fresh macadamia-crusted grouper is lightly golden. The nuts don’t really register much, but the fish is tasty. Sweet potato fries are thinly cut yet not cooked to order, so they’re lukewarm; my taster frowns. However, the seasonal vegetables (in our case, green and yellow squash) are a nice accompaniment.

Mahi mahi tacos top the blackened fish with shredded cabbage, Cheddar Jack cheese, some mango salsa and cilantro cream. Although the dish is flavorful, the tacos leak like a dripping faucet. Be forewarned. The crispy fries served with them are fine.

Crabby’s is a great place for sunset, and I enjoy myself immensely as I pick at the house favorite, bairdi crab, as the sky reddens. A species of snow crab, it’s steamed, then grilled with garlic butter and Old Bay. What’s served is a plate of long legs and claws with part of the body, featuring compartments of sweet meat that take patience to enjoy. My table is rolling their eyes as I work to get every little morsel. But I grew up eating Chesapeake Bay blue crabs, which take three times as much work and resemble an unfathomable puzzle in comparison to the large legs before me.

Crab is a delicacy, and the market price on my visit of $32 is well worth it. The accompanying Southern-style greens beans aren't cooked to death, but just long enough to take on the pork flavor, and the perfectly spherical hush puppies provide savory cornmeal goodness when I take a break from my snow crab coma.

Wisely, Crabby’s keeps dessert simple. The restaurant farms it out to Mike's Pies, offering three-time national champion peanut butter pie topped with chunks of Reese’s drizzled with Hershey’s dark chocolate fudge and caramel in a gluten-free cocoa crust. The second selection is key lime pie. I’m on record as a big fan. It’s tart, as it should be, and it’s creamy from the traditional recipe of egg yolks and condensed milk. Plus, there’s a graham cracker crust. You don’t change perfection. I don’t want chiffon or whipped cream or to pull the punch on the citrus.

My table leaves full of the sunset afterglow — and not a bit crabby. 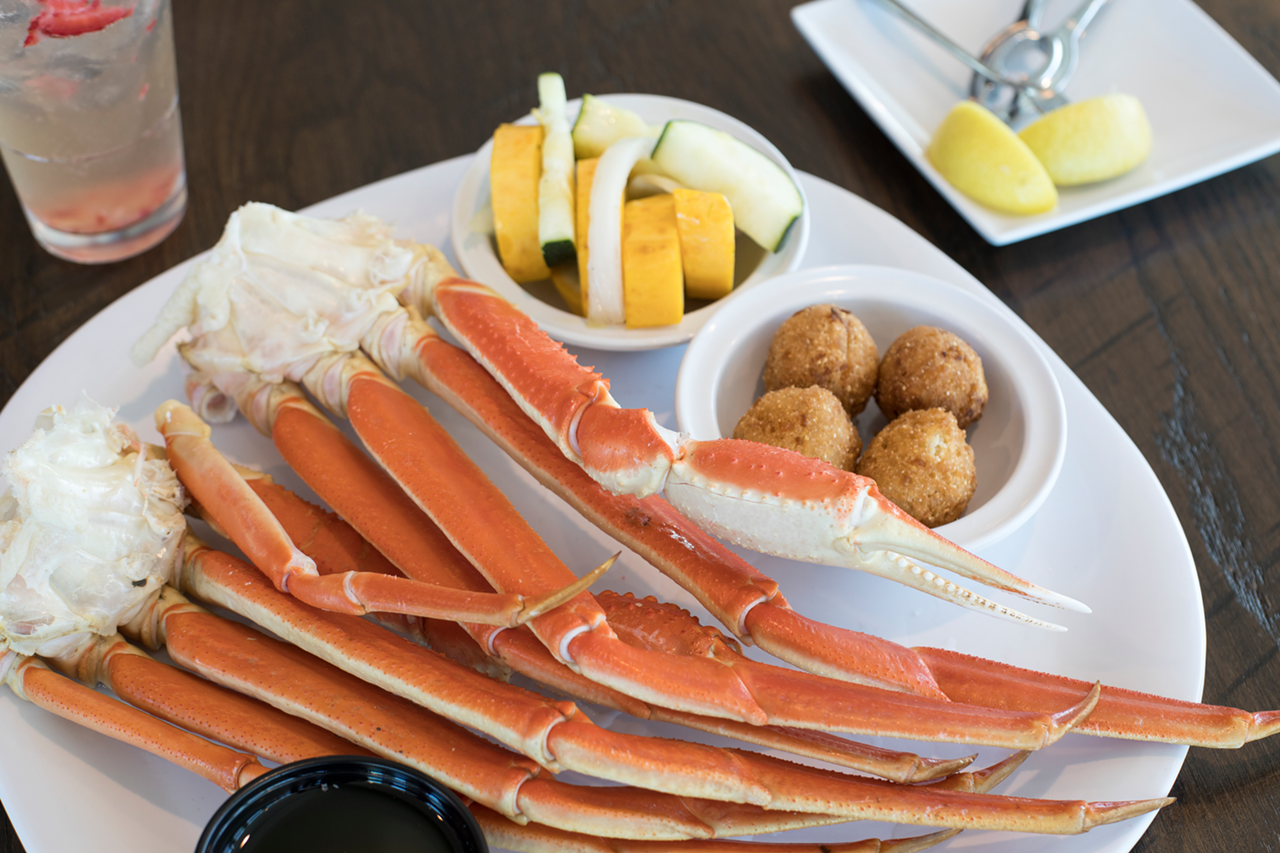 Nicole Abbett
A pitcher of white sangria is a refreshing, cooling accompaniment to any beachside meal. 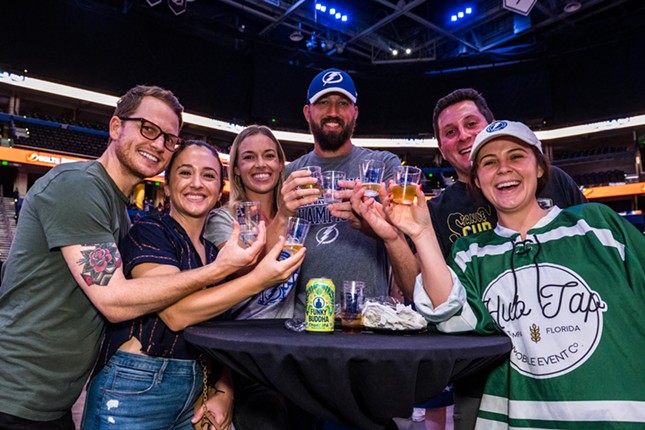 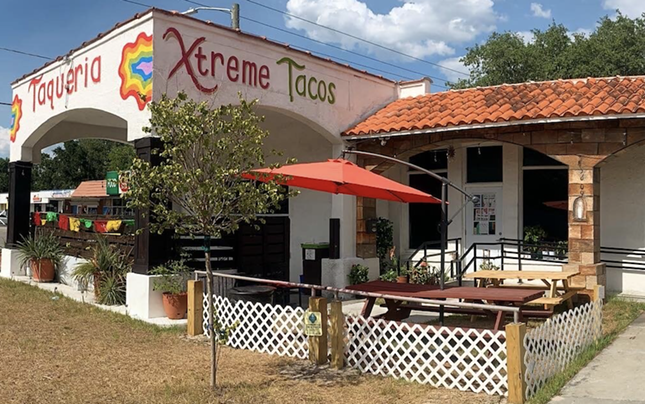 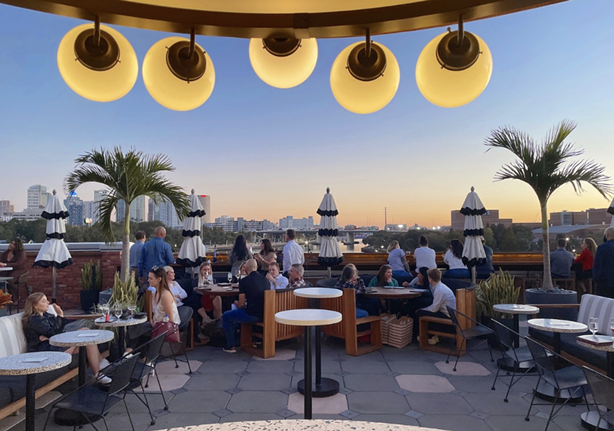 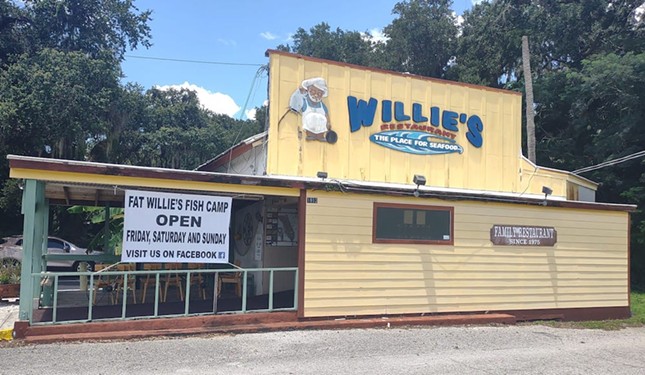 Hockey and beer? That's a no-brainer! That's why your favorite hockey team, the Tampa Bay Lightning, is bringing back everyone's favorite craft beer… 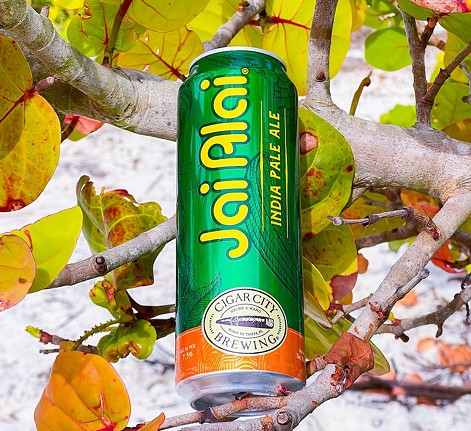 Yes they're popular, but that doesn't mean that these Tampa Bay spots aren't worth your time. Whether your strolling down Tampa's Riverwalk,… 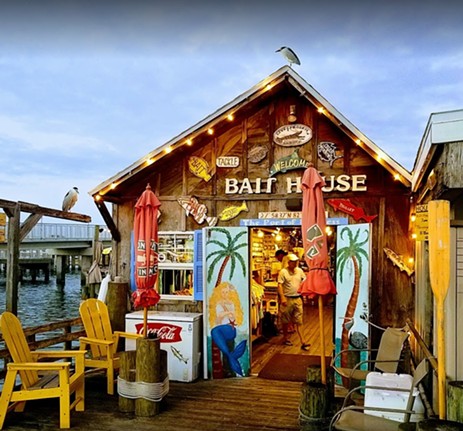