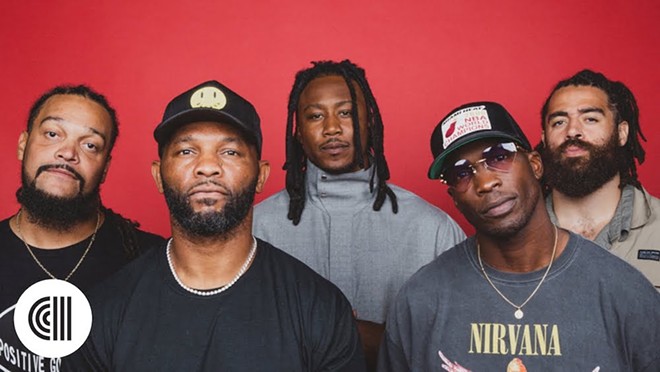 I Am Athlete/YouTube
Chad Ochocinco Johnson, Brandon Marshall and the "I Am Athlete" team are taking the nation's stages with their They'll Probably Do This Too Tour.
Ochocinco won't get fined to say whatever he wants? Sign me up.

Former NFL wide receivers and "I Am Athlete" podcast hosts Chad Ochocinco Johnson and Brandon Marshall are taking to the nation's stages with theirThey'll Probably Do This Too Tour which hits Tampa's Straz Center on Sept. 23 at 8 p.m.

The live sports talk show will consist of the two Pro Bowlers and fellow co-hosts discussing the reality of big-time athletics and its impact on sports, culture and social issues in an unscripted and uncensored fashion, as well as cracking plenty of jokes and hot takes.
Tickets to the show range from $29.50 to $49.50, including post-show meet and greet and photo opportunity VIP packages. Tickets are available for purchase on the Straz Center website.

During its relatively short lifespan, the "I Am Athlete" sports podcast has found itself at the top of the charts and seemingly become a favorite amongst the sports community.

UPDATE: This event has been cancelled. From the Straz: Due to artist scheduling conflicts, the Friday, Sept. 23 performance of I Am Athlete: They’ll Probably Do This Too Tour has been cancelled. All purchases made via credit/debit card for this Straz Center engagement will be automatically refunded. The refund process may take two to four days. Purchases made by cash or check will be refunded by check in seven to 10 days.