Jon Kile talks about how NaNoWriMo changed his life. Jonathan Kile
There are a lot of ways to get to 50,000 words. The Shining would have been a different book in the era of "Copy and Paste."

November brings us to another National Novel Writing Month, aka NaNoWriMo. To the uninitiated, NaNoWriMo is an annual event that started when San Francisco freelance writer Chris Baty convinced 20 fellow writers to commit to writing 50,000 words in one month. This year, nearly a half million people worldwide will attempt to hammer out a novel in 30 days. I might not be a writer today if not for NaNoWriMo.

Let me take you back to 2006. I was a 33-year-old young professional, working in fundraising. My girlfriend (now my wife) and I were in a boutique in St. Petersburg where she was trying on every piece of clothing in the shop. The store had the token lonely rack of men’s shirts which I quickly rejected before perusing the "impulse buys" near the cash register. (This is that small safety zone in a women's clothing store, where a man can loiter without making people uncomfortable.) Mixed into the array of irresistible leather-bound journals and hemp keychains was Baty’s book, No Plot, No Problem, which explained the philosophy behind NaNoWriMo. I was truly intrigued. We bought it, along with a lot of women’s clothing. 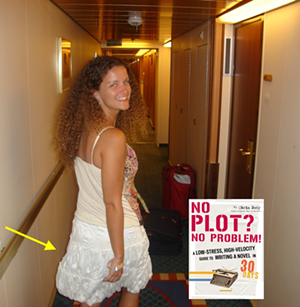 Jonathan Kile
While this was her go-to skirt for a while, a copy of No Plot, No Problem was the most important purchase that day.

Prior to buying that book, I’d started many writing projects, but never finished anything. I read No Plot, No Problem, felt a rush of inspiration and promptly set it aside and forgot about it. For the next few years, my writing talents would be limited to the genre known to most as “work emails.”

A half dozen years later, my friend, a local journalist and author Cathy Salustri (now my esteemed editor at Creative Loafing) said, “Hey, have you ever heard of NaNoWriMo? You should join our group.”

Yes! I had heard of it and I was ready to write the next great American novel. And write I did. I wrote a book that never gained an official title — but I toyed with calling it The Golden Parachute because it involved an American tourist in Switzerland who makes the acquaintance of someone who dies mysteriously in a base jumping accident. Dictators, despots, banks, drug lords and a beautiful woman with curly hair were involved. Don’t look for this book on Amazon. It only exists on a hard drive where I spent a year editing it before declaring it to be a “learning experience.” It was such a colossal literary mess that at one point I edited the entire manuscript — changing it from third person limited to first person.

But I was not discouraged. My next NaNoWriMo project became my first self-published novel, a conspiracy fueled thriller called The Grandfather Clock. It’s a book that has been well received and, in spite of no marketing, had a little dash up the Amazon charts before fading into obscurity. It still does about 50 free downloads per week. (I made it free to keep readership going as I toiled on the sequel.)

My hopes of having the sequel done six months were derailed by a conspiracy of my DNA, but I'm not complaining. That book is in "post production" and will be out in due time. For this year's NaNoWriMo, I'll be applying the lessons I've learned as a fiction writer to a non-fiction project that has been nearly three years in the making. Clearly I’m breaking the first rule of NaNoWriMo in that I’m not writing a novel, but NaNonFiWriMo just doesn't have the same ring to it.

I encourage anyone who has ever thought about taking up writing to join a local NanoWriMo group. It’s totally free. You can interact exclusively online with fellow participants, or you can attend write-ins, meet-ups and retreats. It doesn’t really matter how many words you write; the goal is to dispense with all the obstacles writers place in front of themselves. We think we need to retreat to a secluded mountain to gain focus. We stop ourselves dead with the urge to conduct “research” before writing. We fuss about our writing style. We get bogged down in plot issues. Hell, I’ve wasted time picking a font. The goal in NaNoWriMo? It's to write words.

Visit nanowrimo.org and find a local group. Or join the group of St. Pete writers I'm in — we don’t care where you live. The fun begins Nov. 1. You'll be ready to hack up your family just in time for Thanksgiving.

Bad genes forced Jonathan Kile to give up a life as traveling salesman. Good genes make him a fine and — some would say handsome — writer. His family travel blog Don't Make Me Turn This Van Around, is an international sensation (editor's note: AHEM). His first book, The Grandfather Clock is available on Amazon. The sequel, The Napoleon Bloom, will be out in less time than it took Harper Lee to publish her second book.