Photo via John W. Allman
Scare actors can be found throughout Universal Studios during Halloween Horror Nights, and while they might look innocent, don't be fooled or let your guard down when you pass.
The Halloween season never feels complete until you’ve nearly soiled yourself while navigating through a haunted attraction, and thankfully Florida continues to distinguish itself with a slew of stellar fright destinations, none more buzzworthy than Universal Studios’ Halloween Horror Nights (“HHN”).

HHN has always tried to provide fans with an equal smattering of original haunted houses and houses designed around iconic film properties, including “Evil Dead,” “Cabin in the Woods,” or “The Texas Chainsaw Massacre.”

For its 31st iteration, I’m happy to report that it’s the original ideas and properties that truly stand out this year in Orlando. 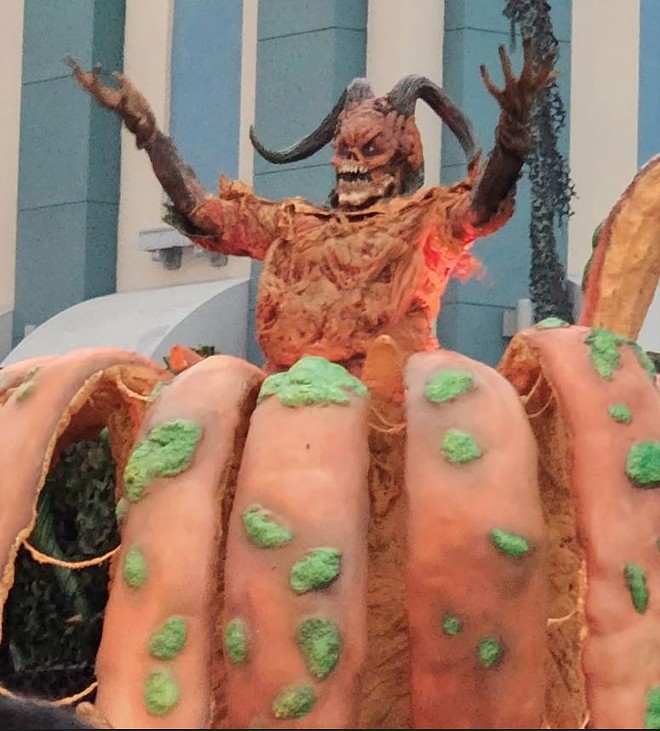 Photo via John W. Allman
The Pumpkin Lord welcomes visitors to Halloween Horror Nights 31 in Orlando.
Yes, there are brand-name attractions, specifically a house built around John Carpenter’s Halloween, as well as another titled The Horrors of Blumhouse, which focuses on two film properties, “Freaky” and “The Black Phone,” from the successful production company.

The Blumhouse attraction, however, was my least favorite of the entire night, if only because it just felt repetitive with the same characters modeled after Ethan Hawke and Kathryn Newton’s killers jump-scaring patrons at seemingly every turn.

Another low point was Universal Monsters: Legends Collide, which envisions a strange mashup of The Mummy, The Wolfman and Dracula all battling it out for supremacy. It’s not a bad haunted house, it just doesn’t really offer anything new or exciting for fans of the three titular creatures.

Thankfully, we got to check out four houses that more than made up for the price of admission plus a fast pass, which is absolutely recommended or else you’ll never make it through all of the attractions in a single night.

The best of the best might surprise you, but hands down, The Weeknd: After Hours Nightmare offers one of the most intoxicating and surreal haunted houses you’ve ever stepped foot inside. As you make your way through a posh nightclub turned hellscape of blood and bad plastic surgery, with a soundtrack of the best hits by Abel Tesfaye, aka The Weeknd, blasting through the speakers, you will be equally entranced and repulsed by the male and female victims waiting to greet you, including multiple performers dressed as The Weeknd in various stages of distress and decomposition. It’s a thrilling few minutes of disorientation that makes you wish you could freeze time to study and absorb all of the elaborate set design and practical prosthetic makeup effects on display.

Equally enthralling is another original house, Dead Man’s Pier: Winter’s Wake, which transports you to a chilly seaside fishing village in New England that seems wholly inspired by H.P. Lovecraft. The massive set is breathtaking to behold, with ghostly, frozen sirens sing-screaming from the stern to the bow along with fish-faced fisherman ready to attack as the mighty vessel heaves and shudders against an angry sea.

That same fantastic attention to detail is also noticeable throughout Fiesta de Chupacabras, which places you at a Mexican festival that’s been ransacked by a horrible urban legend. One of the first things you will notice are the immaculately carved Dia de los Muertos masks worn by many of the performers. But don’t worry, the menacing and magnificent beast soon makes an appearance, and while at first I thought Universal had simply repurposed props from an older house focused around “An American Werewolf in London,” I quickly realized it was just inspiration that was borrowed as the chupacabras on display are both original and frightening and well-designed.

Photo via John W. Allman
The sign outside 'Bugs: Eaten Alive' doesn't fully prepare you for the hellish infestation that awaits inside.
Finally, and I know that many people may not be able to stomach this last haunted attraction, but nothing can truly prepare you for Bugs: Eaten Alive, which time jumps you back to the nuclear 1950s when global conglomerates had Americans convinced that their best interests were being considered. In this case, Buzzcon Industries is holding an open house to show off its patented Extermin-Air system designed to kill pesky household pests…oh wait, fuck, the bugs are winning. If you aren’t a fan of things crawling over you, if you have an aversion to cockroaches, spiders and other multi-legged menaces, then this might be the house where you sit outside.

However, if you love being creeped out as much as having the poop scared out of you, and you don’t mind feeling that incessant itch of invisible legs for a good 45 minutes to an hour after, then Bugs: Eaten Alive might just be the best thing you experience at HHN 31.

If You’re Going
Individual tickets start at $84.99, not counting $129.99 for an Express Pass
Click here to purchase or learn more