The most salient takeaway from MIZE’s 'Dreams Deferred': we aren’t teaching enough black history in our schools.

If MIZE Gallery’s Dreams Deferred was a test of how woke I am, I failed.

As I examined the work, how little I know about black history surprised me. I frantically typed names and phrases into my mobile phone, searching for clues in American history — anything that would tell me what the artwork was about.

This doesn’t happen to me. Ever. That’s saying something about the level of importance America has assigned black history. If a college-educated history buff and art aficionado has trouble interpreting these works of art, something is wrong.

The most salient takeaway from Mize’s Dreams Deferred: we aren’t teaching enough black history in our schools.

The paintings, like bread crumbs, try to lead the viewer to a greater understanding of American History. In Sleep’s “43,” a police helmet with “Detroit” and “34 deaths” written across the top references the Detroit race riots. But I didn’t understand why Sleep titled the piece “43.” As the child of two parents from Detroit, I thought the Detroit race riots happened in the 1960s. I didn’t know there was a race riot on Sunday, June 20, 1943 on Detroit’s Belle Isle.

Michael Jackman referred to the 1943 riot as “Forgotten history” in a 2018 Detroit Metro Times article. When a fight on Belle Isle fed the rumor mill, riots broke out in the racially segregated city of Detroit. Angry white mobs started attacking blacks working in white neighborhoods. Detroit’s black residents retaliated with their own attacks.

Both sides were guilty, but only the black side of town was punished. Detroit police shouted racial epithets, beat up innocent pedestrians, sprayed buildings with gunfire, and shot several black residents in the back on Detroit’s east side, according to Jackman. The U.S. army stopped the riots a day later without firing a shot. Looking at Erika Schnur’s “The Assassination of Fred Hampton,” a triplicate news clipping pinned to a black canvas, I wondered who Fred Hampton was. A bright red X crosses the page, suggesting an inaccuracy. The headline reads, “Chicago Policemen Kill Two Black Panthers in Gun Fight.”

The article describes a gunfight that never happened.

Fred Hampton was chairman of the Illinois chapter of the Black Panther Party in 1969 when he was drugged by an FBI informant, then shot in bed by members of the Chicago PD. Police told the papers it was a gunfight — that they were fired on by eight or nine Black Panthers. In truth, only one shot was fired by a member of the Black Panther party, and this was supposedly done in a reflexive death convulsion. The other 90-95 shots came from police, and it seems Fred Hampton was the target.

Nails in the canvas represent the scene police created to make it look like they’d been fired upon. 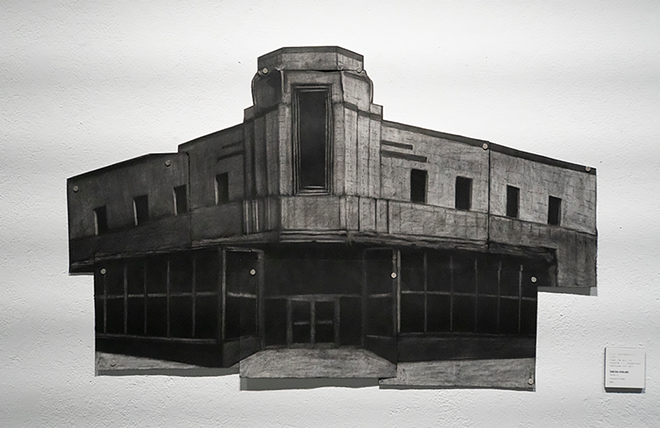 Tamesha Kirkland; Photo by Jennifer Ring
"F.W. Woolworth's 1960 / What We Ask Is Simple ... Impartial Service For All" at MIZE Gallery's 'Dreams Deferred' in St. Petersburg.

Tamesha Kirkland’s “F.W. Woolworth's 1960 / What We Ask Is Simple ... Impartial Service For All” reminds us of Jim Crow-era segregation. It’s impossible to look at this drawing of a building and not ask yourself, “What happened here?”

In this case, the artist was present, so I could ask her. The old building in Kirkland’s charcoal drawing still stands on the corner of Franklin and Polk in Tampa. In 1960 it was a Woolworth’s department store, she tells me. On February 29, 1960, a group of African-American students from Blake and George S. Middleton high schools staged a sit-in here, leading to the desegregation of lunch counters throughout Tampa.

Kirkland discovered the building’s history in May, when the Hillsborough County Historical Advisory Council placed a commemorative plaque in front of the building. “It brings to mind, ‘What else is unknown? What else is hidden?’” she says.

Thanks to MIZE Gallery’s latest exhibition, a little less black history is hidden from view. Each of the works of art in Dreams Deferred tells a story. Often, it’s a story you’ve never heard before. On Thursday, February 21, several Dreams Deferred artists will be present at MIZE Gallery to tell the story behind their work. Don’t miss it.