They're longer than a YouTube clip, but worth the watch.

Lost and Found in America

If there’s one thing I’ve learned from the Florida Museum of Photographic Art’s current exhibition, Lost and Found in America, it’s this: Kalup Linzy is my kind of weirdo.

The Tampa resident, USF grad and FMoPA board member currently has two videos playing at FMoPA  — “Keys to Our Heart” and “Dayz of our Ego.”

“Keys to Our Heart” opens with Linzy dressed as a woman. He’s singing a dirty old blues song by Lil Johnson called “Get ‘Em from the Peanut Man,” aka “Hot Nuts.” Linzy’s character, Lily, is dancing in a silk robe, drink in one hand, cigarette in the other.  Everything’s in black and white. From the beginning, it’s obvious this won’t be your typical art film.


When Lily and Dinah gossip at the kitchen table, it feels like a soap opera, except it’s funny on purpose. It’s made even funnier by Linzy doing all the voices himself. Sometimes, this alone is enough to make me laugh. The intentional melodrama keeps me watching the 24-minute video.

When most people sit down to watch a sitcom-length program, they’re doing this from the comfort of their home. Lost and Found in America has us watching TV in a gallery setting. Not everyone is into it. As I watch people walk in, glance at the TV screen, linger for a few minutes, and move on, I wonder, do I smell today?

In the modern world of social media photographs and 30-second videos, few take the time to sit down and give something new a fair chance.

It is both my pleasure and my job to dwell on the art that others just glance at. After spending an hour watching television at FMoPA, I can tell you that Linzy’s films are worthy of your free time. They’re funny, gritty, sexy, weird, and just fun to watch. And they ask the important questions in life, like, “Do bitches really fall in love?” (That’s a direct line from “Keys to Our Heart.")

In addition to directing and editing these videos, Linzy writes them. He invents these crazy characters, then writes and speaks the dialog that has me both laughing and admiring his writing at the same time. 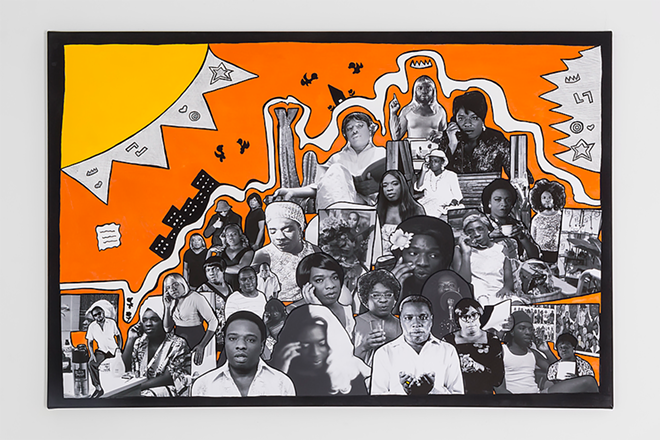 “I thought me creating characters was sort of like when novelists create characters,” says Linzy. “It’s still the writer’s voice, even though there are different people physically portraying the characters.”

It’s hard not to notice a line like “I’m looking for a queen of my heart — not a shady spade,” especially when Linzy’s saying it. It’s also hard not to notice all the profanity. It’s bitches, assholes, and fucks galore in “Keys to Our Heart.” In the name of research, I counted the number of times someone said “bitch” in the 24 min. video. I counted 14, and I might have missed a bitch. Somehow each “bitch” is funnier than the next.

Between bitches, you might notice something more profound. There is real commentary about relationships here. The constant melodrama reminds us how crazy love can be. When we hear, “Bitches can’t be turned around John Jay,” we think of how often our partners try to change us. When we see Dinah look back on her relationship with John Jay with rose-colored glasses, we think of regrets.


In the Art21 digital film series “New York Close Up,” Linzy cites his love of singing, a CD full of blues songs banned from the radio in the 1930s, old black and white movies, and Bette Davis and Joan Crawford’s performances in Whatever Happened to Baby Jane? as inspiration for the film. In Linzy’s mind, all these things came together in the process of creating something new. I’ve never seen anything like it.


The soap opera-inspired “Dayz of our Ego” tells Katonya and Big Foot Freddy’s love story. When Linzy realized the two characters had been in a relationship since 2005, he decided it was time to marry them off. “It was one of the few characters that I wrote in the beginning that actually stayed together,” says Linzy. “Because it’s a soap opera, usually the characters are breaking up.”

After seeing “Keys to Our Heart” and “Dayz of our Ego” at FMoPA, I decided to take a little more time to learn about Linzy’s other video projects, many of which you can watch on YouTube for free @kklinzy. Here’s the rundown:


As Da Art World Might Turn, 2013-present. Art world drama is a constant source of inspiration for Linzy. You can see this in “Dayz of our Ego” and in Linzy’s web series, “As Da Art World Might Turn.” Linzy filmed Season 2 at Eastwild studios in Seminole Heights while he was living in Tampa. Plans for Season 3, starring actors from both Tampa and Tulsa, are in the works.


Melody Set Me Free, 2010-present. The music gets nasty in this web series, set at a fictional record label company run by KK Queen.


Ozara and Katessa, 2019. Linzy met James Franco after a 2009 performance in Miami. “I had literally just got off the pool table in a leotard,” says Linzy. Despite these strange beginnings, the encounter led to a few General Hospital appearances in 2010 and a web series collaboration, “Ozara and Katessa.” Linzy wrote the script about the idea of crossing over from the art world into feature films and vice versa. It’s based on Linzy’s desire to make a feature film and actors’ desires to be part of “the elite art world.”

Keep up with Tampa Bay events and culture by subscribing to our newsletters.