And we’ve got predictions for next year’s lineup. 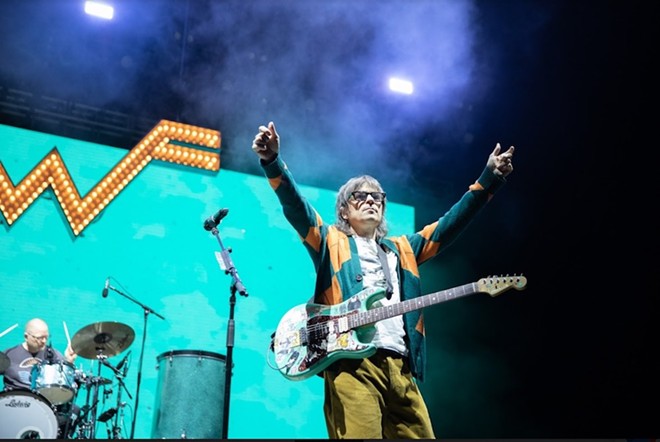 97Xtampabay/Facebook
Weezer plays 97X's Next Big Thing at MidFlorida Credit Union Amphitheatre in Tampa, Florida on December 4, 2021.
Last year marked the 20th anniversary of when a local oldies station switched over to the beloved alternative rock station that first exposed us once-smaller acts like Blink-182, Twenty One Pilots, and a pre-The Black Parade My Chemical Romance. Alternative rock has changed a great deal since that fateful day in 2000, and from there, 97x’s annual Next Big Thing (known among its primarily youthful listeners as “NBT”) has moved to bigger venues, booked hundreds of international and local acts, and brought in thousands of fans.

This year, in honor of the 20th anniversary it couldn’t celebrate in 2020, 97X decided to make this festival its biggest one yet. California quartet Weezer, family trio AJR (brothers Adam, Jack, and Ryan Met), and rap-rock chameleon Twenty One Pilots, all served as headliners across both Friday and Saturday nights. Local acts got in the game as well, even scoring much support and enthusiasm that some locals still strive for.

Tampa’s own Summer Hoop (formerly of SickHot) Meet Me @ The Altar (an all-female band formed thanks to YouTube), and recent TikTok hitmaker Glass Animals kicked off Friday’s opening night of the festival.

At 9:30 p.m., as promised, Tyler Joseph and Josh Dun—aka twenty one pilots (TOP)—entered from stage left, over the intro music to their hit, “Stressed Out.” Truthfully, if that was the only TOP song you knew, there still would not be an ounce of disappointment in you by the end of the set. Being the headliners, the duo and—for the first time ever, their four-piece repertoire—managed to fly right through their standard “Takeover Tour” show in its entirety. Tyler and Josh both engaged in jumping off of a wooden classroom piano, hanging out in the crowd, and obviously, numerous costume changes. Tyler being up front, his changes were a bit more noticeable. A black, sequin-dusted trench coat with sherpa came out on “The Outside.” Later, a white polo with slightly oversized white glasses were donned while Tyler sat behind the classroom piano during “Mulberry Street” (and into a cover of Elton John’s “Bennie and the Jets,” likely for the parents), and for the patter-cut, “Car Radio,” Tyler and Josh both threw on black ski masks which Tyler took off while standing on a risen platform in the crowd.

TPO normally takes much larger stages when they visit Tampa—mainly sticking to Tampa’s Amalie Arena—and despite capacity being similar at Amalie and the old Gary, there was a sense of extra intimacy during the band’s all-covers, literal campfire jam sequence, which featured Johnny Nash’s “I Can See Clearly Now,” The Temptations’ “My Girl” (with the title line being replaced with “Josh Dun”), and Edward Sharpe & The Magnetic Zeros’ “Home,” trumpet solo and all. Those weren’t the only covers of the night. Trumpeter Jesse Blum opened the fearful “Jumpsuit” with the “Halo” theme song, and before jumping into the band’s COVID-inspired “Level of Concern,” War’s “Low Rider” caused a few eyebrows to raise, on the parents’ end. 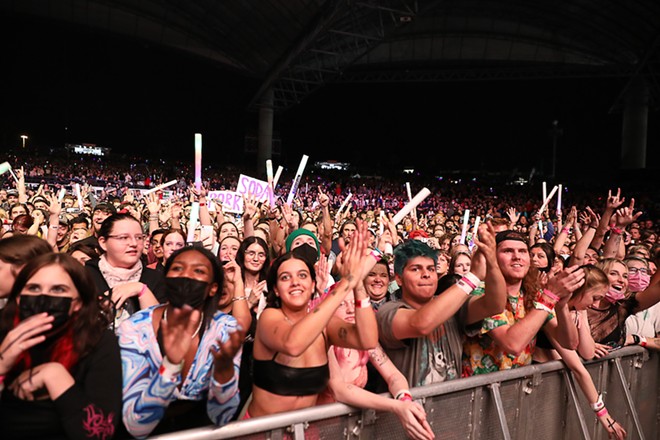 97Xtampabay/Facebook
Fans at 97X's Next Big Thing at MidFlorida Credit Union Amphitheatre in Tampa, Florida on December 4, 2021.
Day two of 97X’s NBT kicked off at 10:20 a.m., with fans sipping Liquid Death and reminiscing about the night before and mulling about the second stage, an addition to accommodate the expanded lineup for Saturday.

Once Nightbreakers finished its heavy, ass-shaking, early morning set, Phoenix-based singer-songwriter Upsahl took the stage at 11:10 a.m., with nothing but her voice, a white bass, and a black Gretsch electric.

Indie-duo Daisy The Great took the stage three separate times on Saturday, the first time for a full, electric-with-band set, half-comprised of songs that have not yet publicly materialized, and again later in the day for a brief acoustic side-stage gig.

Girlfriends—made up of rapper Travis Mills and Goldfinger drummer Nick Gross—has only been a band for a bit over a year, but one addition to its setlist, “Where Were You,” was actually co-written by fans who sent in letters regarding their mental struggles in life.

As a confetti-filled beach ball went flying across the crowd, the ever flamboyant Mod Sun, in a blue, “I Heart RS” sweater, and his (all shirtless) band, became the last act to hit the second stage where fans even formed a mosh pit circle for about a full minute during “Painkiller.” Once Mod closed his set with "Flames" (a new collaboration with girlfriend Avril Lavigne), the stage was shut down, and it was time for the crowd to make its way towards the main stage that countless names have graced over the years.

Girl In Red, fronted by Norwegian queer icon Marie Ulven Ringheim, got distracted by the confetti beach balls from before, now flying across the main pit. “I almost forgot the lyrics because these are very fun to look at!” she admitted after “We Fell In Love In October.” And don’t worry, she closed with “I Wanna Be Your Girlfriend.”

Yungblud, in his first Tampa appearance, dashed out in a Cramps shirt, pink high-socks, and a miniskirt. Puckering his lips and running like Jagger, and swaying his hips like Elvis, the British musician swung a guitar around and later got the crowd to chant “fuck COVID” repeatedly at the end of “Machine Gun (Fuck The NRA).”

Bastille was introduced by fellow NBT veteran and guest co-host, Andrew McMahon, and when lead singer Dan Smith wasn’t running around the stage or leaping on top of monitors and amps, he was centerstage on secondary synthesizers—most significantly when he previewed Bastille’s next album, Give Me The Future with “No Bad Days.”

All Time Low, which played the Tampa Bay Lightning home opener in October, has had a rough year—and lead singer Alex Gaskarth has been recovering from a head cold (not COVID) that messed up his voice—so for much of the set, he leaned on whatever fans knew certain lyrics in All Time Low’s catalog

AJR wasted zero time in providing the most unique set of the 20th NBT. In a little over an hour, brothers Adam, Jack, and Ryan Met made a remix out of “I Got No Strings” from Disney’s “Pinocchio, brought Daisy The Great onstage to perform late summer hit “Record Player,” and even demonstrated how they laid down “Burn The House Down.”

A little while after AJR’s finale of “Weak” came the headliner, which was also no stranger to Tampa, but had never done NBT before. Weezer, featuring rock’s biggest dork, Rivers Cuomo, took the stage at 9:30 p.m. to a transposed recording of Van Halen’s “Jump,” just to launch into “Hero,” off of the band’s latest album, Van Weezer. The California boys finished the U.S. leg of the Hella Mega Tour with Green Day and Fall Out Boy in September, and with Tampa’s Raymond James Stadium not on the tour itinerary, a massive turnout for Weezer was inevitable.

“Beverly Hills” was a huge hit, especially considering the line “Take my picture by the pool/‘Cause I’m the next big thing.” Having done multiple covers in the last few years, it was only natural for Weezer to play its recent take on Metallica’s “Enter Sandman,” originally done for a tribute album. And I don’t think any of the diehards in the house will forget the nice surprise that was Pinkerton’s “Pink Triangle.” The band did, however, miss an insane opportunity with AJR sitting backstage: The two groups collaborated on a new version of Weezer’s “All My Favorite Songs” earlier this year, so a live version together was inevitable, right? While it allegedly said it would happen on Weezer’s setlists, no Met brothers were in sight during the orchestra-based lament.

Now that live music is pretty much back (as long as the Omicron variant fucks off very soon), who knows what next year’s NBT will have in store? My Chemical Romance hasn’t played here in years, and they’re doing a U.S. reunion tour next fall. Perhaps Green Day will do two appearances in Tampa next year.

In the meantime, let’s just suffer from post-concert depression together, by keeping 97X on all day. Or until the commercials begin, anyway.