Annette Taddeo drops out of Florida governors race, will run for congress instead

In a statement, Crist called Taddeo a “tireless public servant and fearless advocate for working Floridians.” 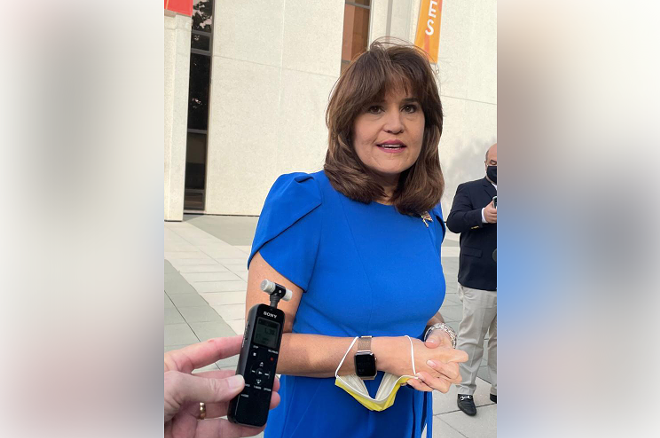 Taddeo, who trailed fellow Democrats Charlie Crist and Nikki Fried in raising money and early polls in the gubernatorial race, said in a statement the decision was about the need for federal leadership on issues such as gun violence, inflation and abortion.

“Families in Miami need a representative in Congress who will stand up for them, hold Washington politicians accountable and make sure we finally tackle issues like the cost of living, gun violence and defending a woman’s right to choose,” Taddeo, D-Miami, said in the statement. “I’m a small-business owner and a mother with a daughter in Miami-Dade public schools, so I live with these issues every single day.”

She also pointed to the recent mass shootings in Buffalo, N.Y., and Uvalde, Texas, as influencing her decision to run in Congressional District 27.

“After the tragedies in Buffalo and Uvalde and a conversation with my daughter about the realities our kids face daily, I knew what I needed to do,” Taddeo said. “We are at a pivotal moment in our country, and we desperately need leadership in Washington that can be trusted to put politics aside for the best interests of Miamians.”

Taddeo will face Miami City Commissioner Ken Russell in the Aug. 23 Democratic primary in Congressional District 27, which was redrawn this year as part of the once-a-decade reapportionment process. Russell initially planned to run for a U.S. Senate seat this year but then shifted to the U.S. House race.

“I am singularly focused on unseating (Salazar), who has been ineffective for her voters,” Russell tweeted Monday after Taddeo’s announcement. “Having been elected twice in this district (as a member of the city commission) delivering on affordable housing and the environment, I am the best candidate to beat the country’s most vulnerable GOP freshman.”

Taddeo’s decision to enter the congressional race was first reported by CBS Miami reporter Jim DeFede, who tweeted that in an interview Taddeo called Salazar “a demagogue, a liar and an embarrassment and someone that has not even voted in the best interests of our community.”

“The third wheel of the Florida Democrat primary for governor, Annette Taddeo, just lost her fourth race in Florida,” Friedland said in a statement, referring to Taddeo losing races before getting elected to the state Senate in a 2017 special election. “It won’t be long until Charlie Crist follows suit.”

In a statement, Crist called Taddeo a “tireless public servant and fearless advocate for working Floridians.”

Fried’s campaign issued a statement that wished Taddeo well and defined the gubernatorial contest as now being between “a proven statewide Democratic winner and a three-time statewide loser and self-described ‘pro-life’ former Republican.”

Fried was elected state agriculture commissioner in 2018. Crist, a U.S. House member from St. Petersburg, served as governor from 2007 to 2011 while a Republican. He unsuccessfully ran for governor as a Democrat in 2014 with Taddeo as his running mate and also earlier lost two bids for U.S. Senate.

Polls compiled by Real Clear Politics showed Crist up in the Democratic primary by an average of 19.3 percentage points since February.

Officials warn public to stay out of portions of Hillsborough River, due to toxic blue-green algae blooms