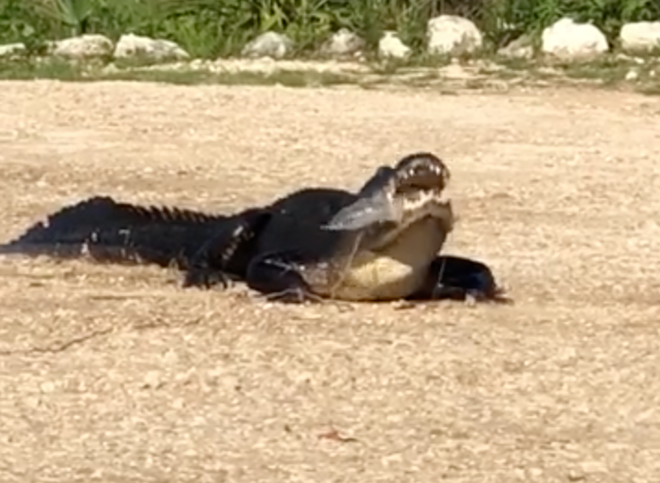 Last weekend a Florida woman filmed what may very well be the peak metaphor for the current state of Florida: a large alligator happily eating trash.

Filmed by Tallahassee resident Corine Samwel on June 23, the video shows a gator at St. Marks National Wildlife Refuge essentially devouring a pile of garbage, including a single-use plastic bag and a rope that it failed to fully swallow and later tripped on while it dangled from its mouth.

“I was having a wonderful time at the St. Marks Wildlife Refuge until I saw this. I could not stop it! Please people, do not use single use plastic and do not litter” wrote Samwel in a Facebook post. “I then picked up about five plastic bottles, ten beer cans, cigarette butts, surgical gloves, bike gloves, a rope, and all sorts of stuff.”

Is this trash-eating gator an allegory for our love of Pubs Subs? Perhaps. Or Publix's horrid lobbying against banning plastic bags? Eh, maybe. Or does it represent our state's inevitable collapse into the sea after years of neglecting to recognize climate change. Who's to say. All we know is he is all of us.

According to the Tallahassee Democrat, local wildlife officials have been notified of the gator and plan to monitor it for signs of stress.

Of course, this gator metaphor is only rivaled by the pair of bald eagles that got stuck in an Orlando sewer following the presidential election in 2016.