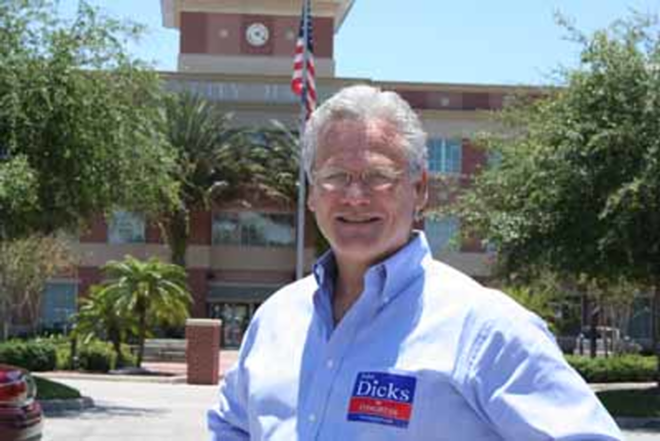 Wayne Garcia
BOYHOOD HOME: John Dicks may be the kind of Democrat who could win in Congressional District 9.

Call it the Eni Faleomavaega factor.

OK, you ask, just who is Eni Faleomavaega?

It is less important just yet to know exactly who Mr. Faleomavaega is than to know this political statistic: He has a higher power ranking in Congress than Rep. Gus Bilirakis, a first-term Republican from Tarpon Springs who followed his father into office in 2006.

In fact, 428 members of the 435-member U.S. House of Representatives have a higher power ranking than Bilirakis. That's according to the calculations of Congress.org, a service of the nonprofit congressional directory publisher Capitol Advantage that uses a complicated metric to arrive at its measures of effectiveness. Democratic challengers and operatives take great glee in the fact that Faleomavaega ranks above Bilirakis, because Faleomavaega isn't even your normal U.S. representative.

And that kind of political factoid has Democrats doing more than snickering.

"We need somebody who is going to be effective in Congress," said John Dicks, the former Plant City mayor and Democrat who is campaigning hard for a chance to unseat Bilirakis.

"Everywhere we go, we hear that Gus Bilirakis is disappointing," said Bill Mitchell, a Tampa lawyer who is also seeking the Democratic nomination.

Bilirakis' fight mirrors the party's battle nationwide. In the past few months, political observers and pundits have seized on the idea that the Republican Party is in bigger trouble than just their quest to hold onto the presidency in November. On May 13, in three special elections in longtime Republican safehold districts in Mississippi, Louisiana and Illinois, Democrats scored upsets by running conservative candidates of their own.

And for some people in Tampa Bay, those victories provide inspiration and a blueprint for switching some congressional seats from Republican red to Democratic blue. In District 9, the Democrats are further fueled by Bilirakis' low ranking.

"For somebody to be performing that poorly, that says to me that is somebody who is overconfident and who is just running on his father's name," said Mitch Kates, a Democratic political consultant in Tampa who does not have a client in any of the Tampa Bay congressional races. "We're watching those [kinds of seats] flip. Maybe more voters are paying attention to what is happening and what's not getting done. Maybe voters will say it's not enough to just have a name."

Florida has a remarkably un-powerful congressional delegation. Because it is so packed with Republicans, and the Democrats are now in control of Congress, Florida's influence in Washington lies — according to Congress.org's power rankings — somewhere below that of Alabama and West Virginia. For now, however, the Democratic Congressional Campaign Committee has targeted just two Red-to-Blue districts in Florida for financial support: Christine Jennings' rematch with Vern Buchanan in Sarasota and an effort to unseat Republican Tom Feeney in Orlando.

For now, that list doesn't include District 9, where three Democrats are vying for the nomination. It is a wildly gerrymandered district that stretches from Plant City across northern Hillsborough, through Palm Harbor, Clearwater, Safety Harbor and East Lake in Pinellas (while excluding Dunedin), north through Tarpon Springs and into part of Pasco County along the Gulf coast. In addition to Dicks and Mitchell, Anita de Palma, a former Florida state director for the League of United Latin American Citizens from Clearwater, is also running in the Democratic primary. (Another Democratic candidate, Michael van Hoek, dropped out and endorsed Dicks.)

Bilirakis' campaign did not respond to a detailed request for an interview for this story. And to be fair, the power rankings are far from the entire story. Even Congress.org acknowledges the rankings can be weighted against freshmen and don't include how well a congressman does in constituency service back home, a factor that can be more important than how they perform in Washington when it comes to an election.

Bilirakis, widely seen as a moderate Republican, has enjoyed the occasional attaboy from the left-of-center St. Petersburg Times editorial board, has mostly kept his distance from President Bush and, of course, has the name on his side: Bilirakis. He changed it on campaign literature in 2006 to include his middle name, Gus Michael Bilirakis, further strengthening the connection to his father, Mike Bilirakis, who held the District 9 seat for 24 years.

"I don't think he's vulnerable," said Tony DiMatteo, chairman of the Pinellas Republican Party. "You have a name that was established since the early-'80s. Those other seats [lost by Republicans] were open seats." He points to Bilirakis' work in the district, including a veterans' fair last year that drew thousands by having singer Tony Orlando as the featured guest.

Bilirakis won his seat by defeating the well-funded campaign of a well-known Hillsborough County Commissioner, Phyllis Busansky, beating her 56 percent to 44 percent. Busansky didn't even carry the Hillsborough portion of District 9, which is more conservative than her liberal profile. So just what kind of truck-drivin', Baptist-church-goin' small-town Democrat might appeal to the moderate voters who swing this type of an election?

Dicks is standing outside of the city hall in downtown Plant City, next to his fire-red Dodge pickup and pointing down Mahoney Street, toward the end of it, where he grew up as a boy. The lawyer and former financial adviser has spent the past nine years in public service as a city council member and mayor. He is a member of the influential First Baptist Church of Plant City.

Dicks has done his homework in the district, in arcane political demographic detail. It still leans Republican (an R+4, for those who follow such indexes of political performance) but just a small swing of moderate voters, 3 percent, turns the election around, Dicks insisted. He has hired the same Birmingham, Ala., pollster that advised the winner of the Mississippi special election in May. He's raised more than $300,000, $200,000 of which came from his personal finances. (Bilirakis has more than $800,000 banked.)

Dicks is a conservative Democrat, a blue dog, who seems more in step with the largely rural and suburban district than Busansky was two years ago. (Dicks said Busansky has encouraged him in his campaign, and Dicks also has powerful contributors, including Florida Chief Financial Officer Alex Sink.) He takes encouragement from his pollster, who believes that Dicks' district has an even better shot to go Democrat than the one in Mississippi.

Dicks said he believes the electorate here is ready for a similar shift.

"It is sour," he said of the mood of the voters. "It is more sour than I have ever seen it. The country wants change. The country needs change."

For more information on this race, including about Dicks' stance on the issues and what he says about a 1996 investment controversy that could haunt his campaign, go to our Political Whore blog.