“The weight of this moment is not lost on me. The responsibility of this job, especially now, is extremely mighty." 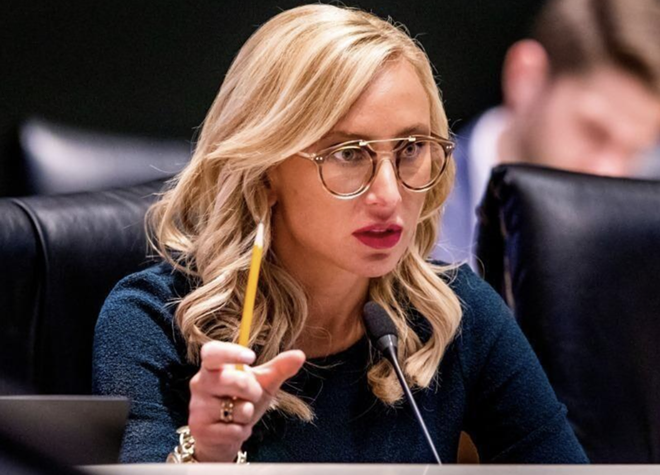 Photo via NSF
Badly outnumbered Democrats in the Florida Senate put a focus Monday on gun-related issues as Senate Minority Leader Lauren Book was formally designated to continue heading the caucus going into the 2023 legislative session.

Book became leader in 2021 after Senate Democrats cast a vote of no confidence on then-Minority Leader Gary Farmer, D-Lighthouse Point.

But Book, D-Davie, will go into the 2023 session with only 12 Democrats in the 40-member Senate and Republicans holding what’s known as a “supermajority” that is important procedurally. Republicans gained four Senate seats in this year’s elections.

“The weight of this moment is not lost on me. The responsibility of this job, especially now, is extremely mighty. And members, I intend not only to meet this moment, but to rise. Because we may be down, but we certainly are not out,” Book said during a ceremony Monday in the Senate chamber.

Book later pointed to strategy and working with Republicans as the Democrats’ best chance to make an impact.

Acknowledging there are some issues that “we are not going to agree on” with Republicans, Book said Democrats are aiming to work with Republicans to address issues such as property insurance and housing.

Monday’s ceremony had several speakers who discussed gun violence. Romania Dukes, whose son De’Michael was killed in 2014, and Fred Guttenberg, whose daughter Jaime was killed in the 2018 Marjory Stoneman Douglas High School mass shooting, were called on to offer an opening prayer.

Instead of a prayer, Guttenberg made a request of senators as he spoke.

“Others will push back at efforts to reduce gun violence and deaths related to gun violence. I hope that you will all speak loudly and forcefully to tell them it is wrong,” Guttenberg said.

Guttenberg’s comments came after a shooting Saturday at a Colorado LGBTQ nightclub that killed five people.

With Republicans possibly bringing forward legislation that could loosen restrictions on when and where people can carry firearms, Book acknowledged that Senate Democrats don’t have the votes to defeat such a measure.

“As you know and I do, the numbers, we don’t have them. But what we can do is fight strategically,” Book said, while echoing her earlier comments that working with Republicans is necessary.

Gov. Ron DeSantis has expressed a desire for the Republican-dominated Legislature to pass a measure known as “constitutional carry,” which would allow gun owners to carry firearms without concealed-weapons licenses. Book said Democrats are having “conversations” about gun legislation that could emerge during session.

The Senate Democrats’ ceremony came as the Legislature prepares to hold an organization session Tuesday that is required after the Nov. 8 elections. New Senate President Kathleen Passidomo, R-Naples, and new House Speaker Paul Renner, R-Palm Coast, will formally move into their roles during the one-day session.

“The mothers and fathers of murdered children in the urban core, there are no marches for them. There are no rallies. There is no legislation that changes for Black children. But there should be. That’s why I’m here,” Pizzo said.