A local Indigenous rights group called Tampa a 'place of hate' and is organizing against the charge.

Dave Decker
Tampa's Columbus Statue was splashed with fake blood during a protest in October.
A Native American man of the Choctaw Nation has been charged with a second degree misdemeanor after protesting Tampa's controversial Christopher Columbus statue.

The man, whose name is being withheld for now out of concern for privacy, is facing a charge of criminal mischief with less than $200 in damage after attending a protest on Oct. 15. At that protest, fake blood made of water and food coloring was thrown on the Columbus statue by protestors. Several people also placed bloody handprints all over the statue.

The Choctaw man's notice to appear in court was delivered by the Hillsborough County court on Nov. 23, more than a month after the event and during Native American Heritage Month. He is currently set to appear in court in January, but the date is subject to change as he has obtained legal counsel to represent him.

The protesters were there in October because, for Indigenous people, Columbus represents pedophilia, slavery, rape and genocide. It’s well documented that the explorer, who was lost and found himself in Hispaniola, committed brutal atrocities upon the peaceful Indigenous people he found there. He even fed Native babies to dogs in front of horrified parents.

Natives have protested the statue for 30 years, but their cries have been ignored by the City of Tampa. 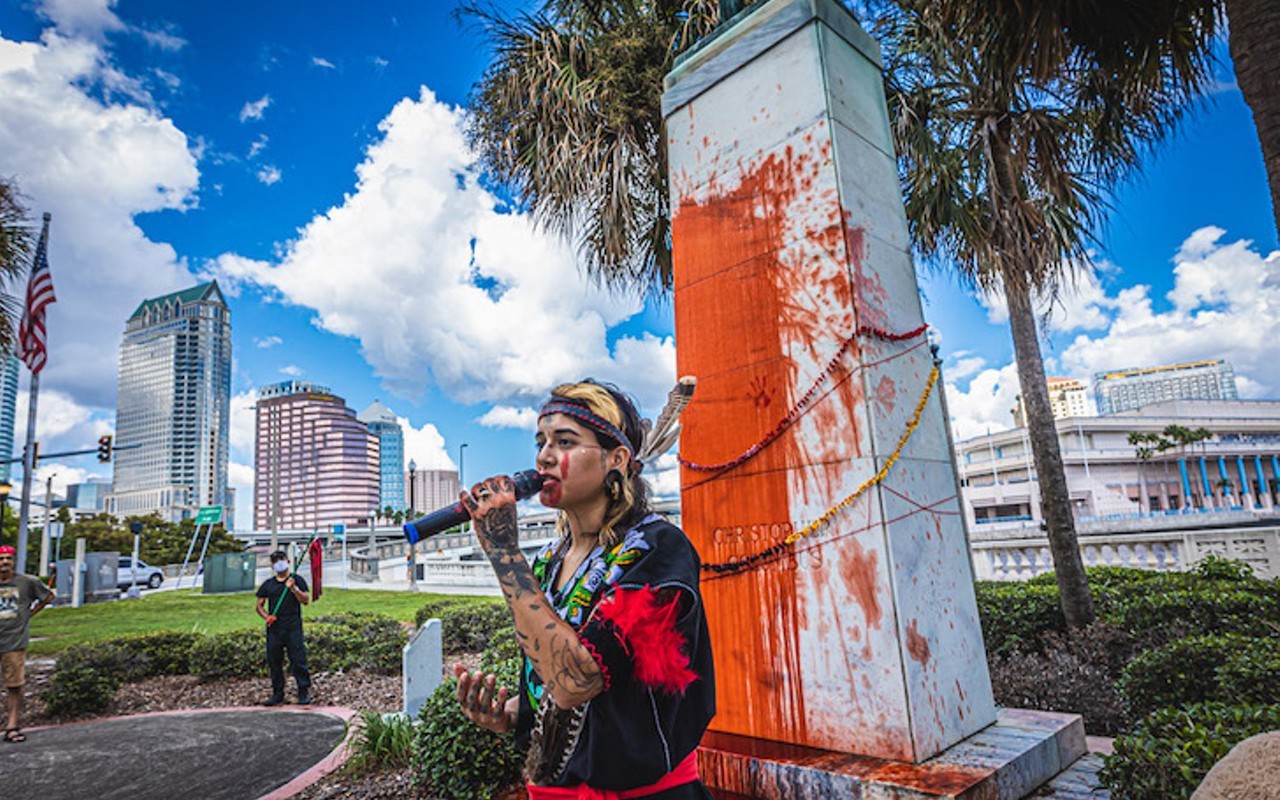 On that day in October, the Choctaw man was pulled over by several TPD officers when leaving the protest, but was released without incident. CL asked TPD why he was pulled over but released, and why it took over a month for him to receive a charge.

TPD said that the man had splattered a container filled with red dye on the Columbus Statue in the presence of TPD officers, causing damage that required Tampa Fire Rescue to assist with the removal of the dye.

"[He} was stopped by officers as he attempted to leave after committing the act," TPD's PIO wrote. "Officers ultimately decided to direct file charges with the State Attorney’s Office (SAO) rather than take [him] to jail. The one-month delay in charging [him] would need to be addressed with the SAO."

TPD said that charges were also direct filed for an additional individual who splattered the dye. The State Attorney's Office for District 13 hasn't responded to request for comment.

His notice to appear in court was delivered on the day before what most people call "Thanksgiving" but what Natives refer to as a National Day of Mourning due to the fact that the holiday actually represents the violent colonization of North American Natives.

The Florida Indigenous Alliance says that in response to the man's charge, the group is reaching out to Native groups around the country to join them in "condemning Tampa as a place of hate" and to fight TPD and the state attorney's charges against the man.

Today, the fake blood has been washed away from the Columbus Statue, which is now surrounded by a tall chain link fence. The FIA says the fence was erected in response to the group's event to honor the National Day of Mourning in front of the Columbus statue last Thursday.

The group still held the event, but couldn't pray for their Native ancestors near the statue because of the fencing—which is where they usually prayed in past years.

Sheridan Murphy of FIA told Creative Loafing Tampa Bay that the city's decision to fence off the property is a violation of the federal American Indian Religious Freedom Act. The act says that any site classified as a ceremonial site by Natives shall be accessible to Natives for ceremonial use.

"They wouldn't let Native people on a site to pray that we've prayed at consistently over time," Murphy said. The group has filed a complaint with the U.S. Office of Civil Rights. 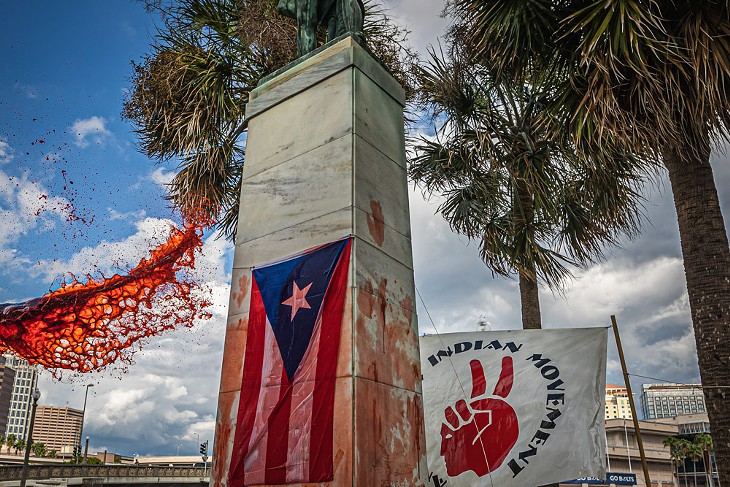 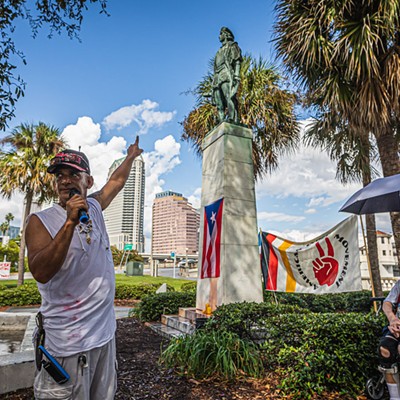 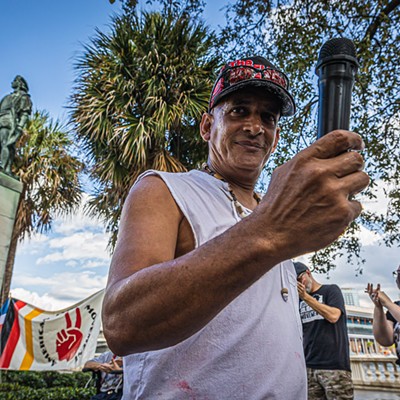 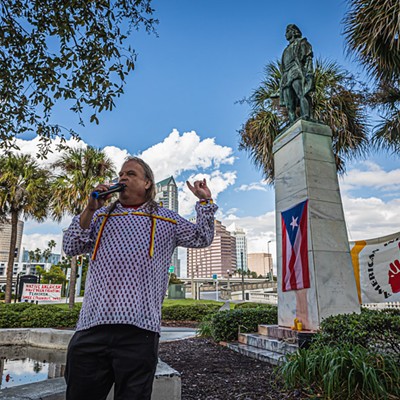 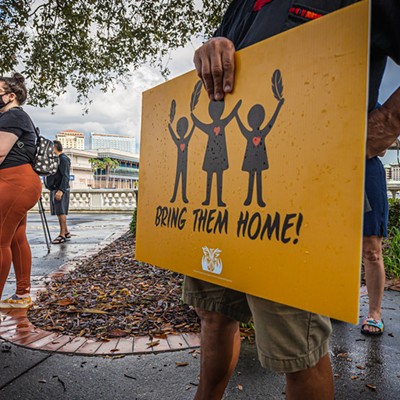 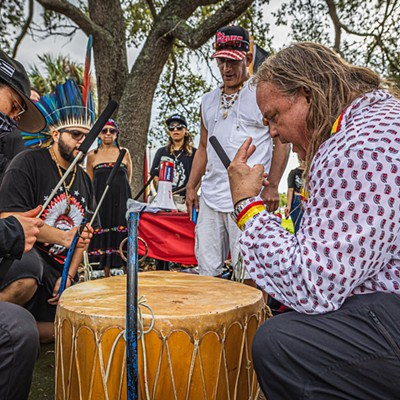