The healthcare workers were protesting unsafe staffing and other issues during the pandemic surge. 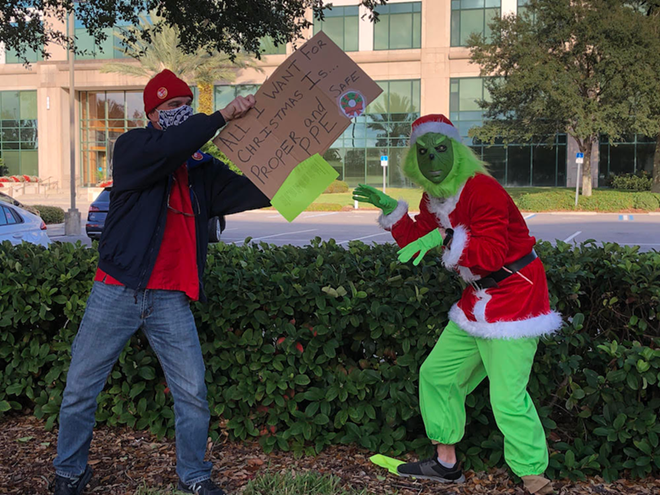 Tampa Bay nurses represented by the National Nurses United (NNU) were joined by labor organizers and sympathetic community members, like the Grinch, Thursday afternoon—yes, you read that correctly—to literally deliver a sack of coal to HCA West Florida Headquarters at North Rocky Point Drive off of the Courtney Campbell Causeway.

According to a press release, the holiday-themed demonstration was sardonically described as a way for local nurses who work at HCA West Florida hospitals to “convey their displeasure with the unwelcome holiday gifts of unsafe staffing amid the pandemic surge, failure to notify frontline nurses of exposure to COVID-19, and a shocking rise in the loss of RNs who have left due to unsafe conditions.”

Despite nurses’ ongoing concerns, nurses with HCA Healthcare showed good humor on Thursday by adding a holiday twist to their demonstration of protest.

One organizer with National Nurses United (NNU) showed up to the demonstration in a Grinch costume, and walked into the company headquarters with the delegation of nurses to present their sack of coal and list of demands for HCA.

Creative Loafing Tampa Bay reached out to the HCA West Florida Headquarters via phone and email early Thursday afternoon to seek comment. As of Friday afternoon, they have not returned our request.

Over the course of the coronavirus pandemic, local nurses at HCA medical facilities have protested ongoing concerns regarding unsafe staffing levels, protection personal equipment (PPE) shortages, and ineffective communication between hospital managers and nurses about colleagues and patients who test positive for COVID-19.

And these complaints aren’t unique to the Tampa Bay area. In August, nurses represented by National Nurses United staged over 200 events during a single day of action to raise awareness of unsafe working conditions and their demands for HCA Healthcare—one of the largest for-profit hospital systems in the United States. The healthcare giant’s local division, HCA West Florida, owns and operates 15 medical facilities across the Tampa Bay region, including St. Petersburg General, Memorial Hospital of Tampa, and Medical Largo Center among others.

Although lack of access to PPE is no longer the primary concern, according to nurses who spoke to CL, they maintain that they continue to face issues with being short-staffed and a lack of transparency about positive COVID-19 cases among their colleagues at HCA West Florida facilities.

Registered nurse Keosha Morris, who works in the medical surgical unit at Largo Medical Center, told CL that news of a colleague testing positive for the coronavirus is only communicated between workers—and not by hospital managers.

The national nurses union—which represents more than 150,000 nurses nationwide—filed complaints with the Occupational Safety and Health Administration earlier this year, according to the Tampa Bay Times, alleging that hospitals were not notifying nurses when their colleagues contracted COVID-19. At the time, the agency confirmed they had received these complaints, but had decided not to investigate them.

But Morris’s primary concern, which is not unique to the pandemic era, is unsafe staffing levels. Morris said the nurse to patient staff ratios on her unit at Largo Medical Center have worsened over the course of the pandemic, where one nurse might be tasked with taking care of six to eight patients at a time. Short-staffing is a chronic issue, she says, and can be partly attributed to exhausted healthcare workers calling it quits.

Over 400 RNs “have left the bedside” from eight HCA West Florida hospitals over the last six months, according to NNU’s Thursday press statement. And Morris says this directly reflects their working conditions.

During a speech outside of company headquarters on Thursday, Morris said many nurses she knows have reported crying in their cars on their way home after work. “A lot of people are just frustrated,” she said, in regards to what she and her colleagues broadly characterize as increasingly stressful working conditions.

“Overwhelmed nurses are being required to provide care for an unsafe number of patients in the hospital intensive care units and on other hospital floors. It means we are regularly not able to devote the essential time and individualized care each of our gravely ill patients need, properly monitor changes in a patient’s condition, and are more prone to make mistakes,” said registered nurse Jackie Creevy of Doctors Hospital of Sarasota in Thursday’s statement to the press.

Chief Nurse Representative at Largo Medical Center Martin Pebbles, RN, also spoke on the point of nurses’ ongoing concerns with staffing and how HCA Healthcare treats nurses who work at their facilities.

Pebbles said the reason for why nurses are leaving “goes back years,” as he and his colleagues have repeatedly expressed concerns to HCA regarding chronic understaffing and lack of basic hospital supplies such as IV pumps, EKG cables, and oxygen regulators. And their concerns, Pebbles alleged, “are met with disdain, ridicule, and even hostility.”

Over the course of the pandemic, Pebbles told CL, “It's been a real wake up call about the true nature of HCA to exploit nurses and patients for profit.”

In October, HCA Healthcare even announced that it would be returning the $6 billion it received in COVID-19 relief funds earlier this year as part of the Coronavirus Aid, Relief, and Economic Security (CARES) Act passed by Congress.

“We greatly appreciate the CARES Act funding and the policymakers who fought hard to ensure hospitals would have the essential resources during the pandemic,” said HCA CEO Sam Hazen, in a statement released at the time.

Hazen, who has served as chief executive officer of the Nashville-based healthcare giant since January 2019, is also not hurting financially. Hazen reportedly made nearly $27 million in his first year as the company’s CEO—more than 470 times the median salary of an HCA employee.

As it was, the lone security guard posted in the lobby of the large building informed the delegation that there were no HCA employees in the building to accept their coal, and that they would have to leave the private property shortly.

Even so, on the sidewalks off the private property and directly outside of company headquarters, the group of RNs, union representatives, and other community members took a few moments to participate in socially-distanced caroling, featuring lyrics that were edited to better reflect the nature of their gathering.

Before departing Thursday afternoon, nurses with HCA Healthcare asserted that they have hope for their ongoing fight for respect and dignity in the workplace, for themselves and their colleagues.

The next year “is going to be a different year, a year when all nurses stand together,” said Pebbles. “This Christmas and over these holidays, let's remember those who cannot stand with us. This new year, let's bring in the year of a nurse—2021, the year of nurses.”