This comes after TPD arrested a Native American protester hit by a driver in South Tampa. 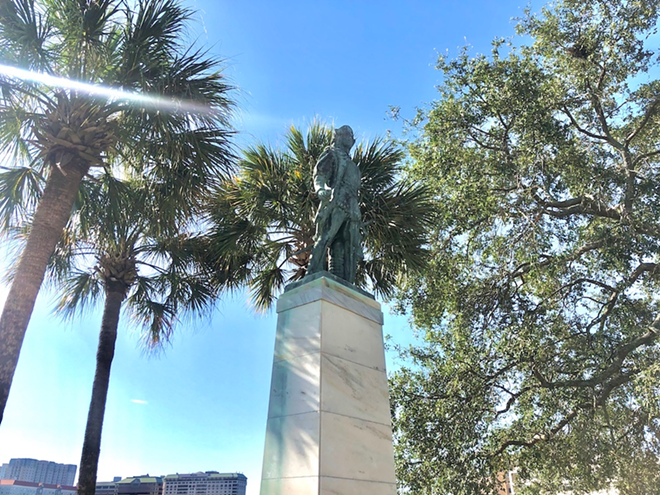 After weeks of reports of excessive force used on Black Lives Matter protesters and a refusal to pursue drivers who plowed through Black and Indigenous people, the Tampa Police Department has decided to use its resources to defend a controversial Christopher Columbus statue.

The statue stands within “Columbus Statue Park,” at the intersection of Bayshore Boulevard and Platt Street Bridge in affluent South Tampa. It depicts Columbus with a sword in one hand and an oar in the other.  “The statue is of him pleading his case to the Spanish court,” said Rodney Kite-Powell, curator at the Tampa Bay History Center to Creative Loafing Tampa Bay. “It’s a very common, standard statue pose.”

The construction was sponsored by the Ybor City Rotary Club and erected there on Columbus Day, October 12, 1953.

“It was designed by a Cuban artist named Alberto Sabas,” says Kite-Powell. “At the time it was seen as a unifying symbol between Spain, Cuba and the U.S., and the dedication brought quite a few dignitaries and local and state celebrities, including Cuban and Italian ambassadors to the U.S.”

For decades, the statue has been a source of controversy for Native American people. Columbus statues are a major target in America, with multiple being beheaded and torn down. On the Fourth of July a Columbus statue was pulled down and rolled into Baltimore’s Inner Harbor. In Buffalo, New York, the city removed a Columbus statue out of anticipation that protesters might do it themselves.

For at least the last couple weeks, TPD vehicles have been seen parked near the statue, at all hours of the day. The decision by TPD come after monuments to colonization and genocide are being destroyed by protesters across the world. So it wasn’t at all surprising that late last month someone stamped Black Lives Matter symbols on it.

A public information officer for TPD told CL that the department is constantly doing speed limit enforcement in that area, and that it's “Taken a proactive approach to protecting all monuments and statues throughout the city during protests.”

“In Florida, you have statues to Columbus, Ponce De Leon, Hernando DeSoto, all these mass murderers,”  Murphy told CL, “and essentially their contribution to society was that they were slaughtering African and Native people.”

Murphy said that demands to remove the statue through demonstrations and calling on public officials have been met with “crickets” from the City of Tampa over the past 29 years. He wondered what kind of message it sends that TPD uses its resources to defend a statue while violent criminals are allowed to go free.

Murphy is a close friend and Native relative of Jason Stuart Flores, an Indigenous man who was observing a moment of silence for Black lives at the end of a march in Hyde Park, when a car moved through the crowd and pushed Flores onto the hood.

Flores stood in front of the car to protect people after the driver had endangered several protesters. He was hit along with another person who rolled off the hood, and was taken on a dangerous ride for a half mile, only to be arrested by TPD and charged with three misdemeanors and one felony. The white male driver was immediately released with no investigation.

TPD accused Flores of smashing the driver’s windshield, and charged him with felony criminal mischief on June 27. But another protester told WMNF he smashed the windshield in self-defense before the car got to Flores; the WMNF article includes video showing that Flores was peacefully holding an eagle feather and an abalone shell used for prayer when he was pushed onto the car. Another video shows Flores’ non-violent stance, which was created by Last Real Indians. TPD’s arrest report does not even identify the correct street that the incident occurred on.

Flores’ arrest led to a night of rage at Orient Road Jail, where protesters demanded his release. He made bail, but still faces charges while TPD refuses to pursue the person who drove into him. Nor have they used their resources to investigate the incident with evidence widely available online, and realize their arrest report and charges are riddled with errors.

The week before Flores was hit, a car sped through a protest in Hyde Park that demanded the firing of Tampa Police Chief Brian Dugan, due to TPD’s excessive use of force and Dugan’s lies to the media.  The driver struck and injured activist Jae Passmore. In that case, the police also refused to pursue the driver who hit the Black woman protester, even though the license plate was documented and shared on social media. 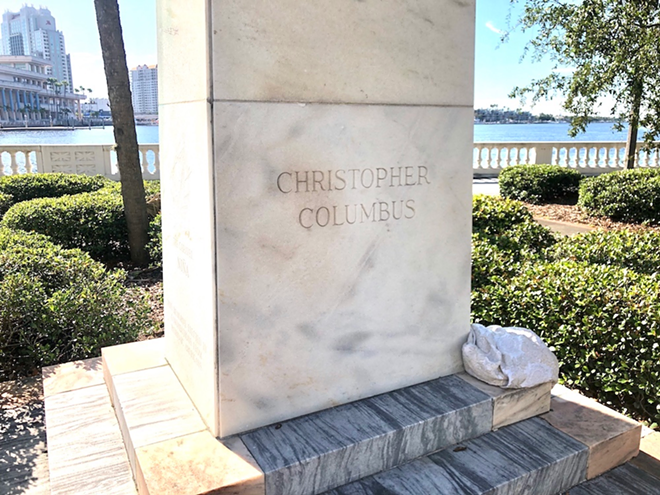 Yet, the TPD has the resources to guard a statue day and night which glorifies a man who was lost, stumbled upon the Caribbean (he did not discover America), and mercilessly ravaged the peaceful Arawak tribe who lived there.

“When your Highnesses so command, they could all be carried off to Castile or be held captive in the island itself,” Columbus wrote about the Arawak in his journal, “Because with 50 men they could all be subjugated and compelled to do anything one wishes.”

Detailed evidence of Christopher Columbus’ bloodthirsty campaign can be found in the journal of a witness to his atrocities, Father Bartolomé de Las Casas.

Murphy says that the statue being guarded, while charges are pursued against Flores, symbolize TPD's and Mayor Jane Castor’s disdain for Indigenous lives and history. Sports teams are shedding their racist names and imagery while cities around the country are removing statues and changing Columbus Day to Indigenous People’s Day.

Besides the genocidal background shrouding the statue, it’s important to note that its placement is incredibly odd. For one, it's easy to miss. Whether you're driving from either direction on Bayshore, the park is just a split second in your daily commute and is dwarfed by the looming Jose Gasparilla, which is anchored just a few feet away. On a recent visit, the park's only occupant was a homeless person sleeping on a bench. The area was also littered with waxed curbs, suggesting that before the recent presence by Tampa Police squad cars, Columbus Statue Park was probably a safe spot for skateboards to practice without fear of a trespassing violation.

In his comments to CL, Kite-Powell explained that in the early ‘50s, Bayshore was undergoing a major beautification process. Kite-Powell admittedly doesn’t have a good answer on why the statue is located in the park in the first place.

“It was always a nice road, but at that time they were doing a lot of landscaping,” Kite-Powell siad. “Originally, you had to leave Bayshore to get downtown, and I think around that time they completed what was called Little Bayhore, and it was tied to that beautification effort. But a lot of the money was raised by residents of Ybor City for the statue, so it is strange that it wasn’t put in Ybor. It would’ve made more sense.”

Kite-Powell added that he doesn’t have any suggestions offhand for a better replacement, but said that the City of Tampa should at the very least place a marker at the park “with more context on the incredible death brought by Columbus.”

Plus, Tampa has already shown that the city is not above fixing problematic landmarks and righting historical wrongs. For starters, the Riverwalk in downtown Tampa includes numerous monuments to Native Americans. In 2017, a Confederate statue at the Hillsborough County Courthouse was removed and relocated to a cemetery in Brandon. In the 1920s, South Tampa had an entire neighborhood called Swastika until Adolf Hitler came around and the city was forced to rename it. And, in 1986, the City of Tampa renamed Buffalo Avenue to Martin Luther King Jr. Avenue (though we still have a Columbus Drive that should also be changed).

Meanwhile, Tampa city officials stand firm in their defense of Columbus and violent white drivers who barrel through crowds of people of color. Murphy says that the current uprising against police violence towards people of color, and the United States’ honoring of genocidal figures are connected.

“The dominant society has to recognize the original sins of America,” Murphy says. “Before we can heal and get to the real issues of today.”