‘The mayor is saying that the people don't deserve to vote’: Tampa city council reacts to Castor’s charter change vetoes

Council has a chance to override the mayor at its Jan. 19 meeting. 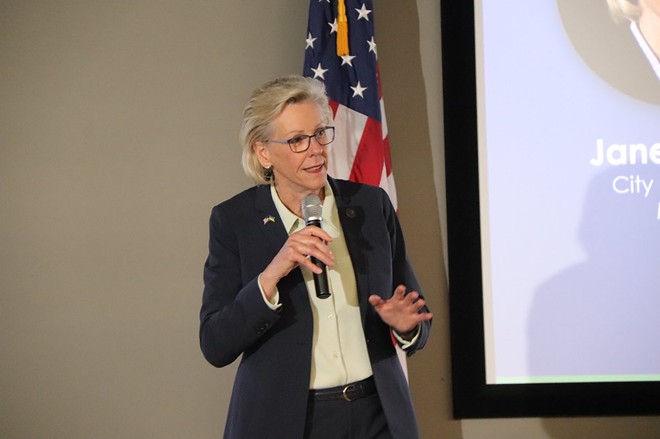 Jane Castor/Twitter
Mayor Jane Castor speaks at a conference last year
Earlier this month, Tampa city council decided that citizens should have the opportunity to vote on five proposed changes to the city’s charter. But today, Mayor Jane Castor surprised council with an Op-Ed in the Tampa Bay Times, which said that she vetoed their decision.

The Op-Ed was published on the publication's website hours before city council members received a memo from Castor stating her defense of the vetoes. She argued that the proposed charter changes weren’t deliberative and transparent enough, writing, “Our voters deserve better.”

The proposed changes include giving the police citizen’s review board an independent attorney, something that’s been long-fought for by local police transparency advocates.

Council also suggested giving itself more oversight of the appointment of department heads. The proposed change comes after former Tampa police chief Mary O’Connor was forced to resign by Castor after using her police badge to get out of a traffic stop.

Castor appointed O’Connor to chief last year amid controversy over a lack of transparency in the selection process. Notably, Castor also told the public that O’Connor had started her job as chief before even receiving council’s approval, which is currently required by city charter.

Other proposed charter changes for voters to consider included: allowing city council to create oversight boards, prohibit council members from serving more than four consecutive terms, and having the Charter Review Commission—which suggests changes to the charter—convene every eight years instead of every decade.

Many of the suggested changes have been requested by citizens of Tampa at city council meetings during recent years, where people have clamored for more transparency from Castor’s administration and the Tampa Police Department.

The vetoes have been added to tomorrow’s city council meeting. That’s when the seven council members will decide on whether to go along with the mayor or override her vetoes. City charter requires at least five votes from council in order to reject the mayor’s vetoes, which are the first that she's made during her time as mayor.

Councilwoman Lynn Hurtak, along with several other council members, discovered that Castor had made her decision through reading the Times Op-Ed this morning.

“Basically, the mayor is saying that the people don't deserve to vote on the changes.”

In her memo to council, Castor argued that the proposed changes would challenge the current “strong mayor” form of government. She argued against letting council have more oversight when appointing department heads, and wrote, “In a strong Mayor form of government, Council members should be a check on the Mayor’s appointment authority – but should not wrest control of that authority.”

But Hurtak argued that it’s the citizens of Tampa who want a better check on Castor’s control.

“It really isn’t about council giving itself more power,” she said.

“The people are the ones who want council to have more oversight and power. By giving the power to us to meet with candidates for department heads ahead of time, we can prevent what just happened. The people were adamant that they did not want O’Connor and that they wanted Butch Delgado,” Hurtak said.

Delgado served as interim police chief before Castor passed him over for O’Connor.

Castor’s decision came after Delgado changed Castor’s racially biased “crime free multi-housing” project to make it less intrusive, while Castor adamantly defended the program, which she oversaw when she was police chief.

That program, also known as “renting while Black” is currently under federal investigation. Department of Justice seeks input from victims of Tampa's 'crime free multi-housing' program: The DOJ wants to talk to people who were displaced by the program, which was initiated by Tampa police.

Councilman Bill Carlson said that Castor’s vetoes and the Op-Ed are “obviously driven by weakness and fear” from Castor. He said that the administration is paranoid that city council will retain and use its powers to provide oversight.

“They are also afraid that any kind of compromise with Council or the community would be viewed as a sign that they do not have omnipotent control over the City,” Carlson said. “It's a shame because American democracy was built on a balance of powers and a checks and balances system. The founders of our great nation knew that despots would try to rule absolutely so they placed protections in our form of government.”

Carlson said Tampa deserves a dialogue and debate on the issues, not power moves, disinformation and dirty politics.

“I call on the mayor to end the childish and unethical behavior of her administration,” he added.

Councilman Orlando Gudes said that the mayor is springing the veto on council last minute.

“The mayor has the right to exercise the veto, but I think this late entry of veto power is not in character for a leader of the city,” Gudes said. “I'm just hoping that tomorrow morning, council will handle this at the first call of business to give the voters an opportunity to shed light on what they want to do at the polls.”

Councilman Luis Viera said he plans to stick by his previous decision to let the voters weigh in, barring any unforeseen circumstances.

“There's gonna be a discussion and if there's any new information brought forth, I'll consider it,” Viera said. “But I mean, I don't see any reason as to why I would change my votes on these, frankly.”