Paul Wilborn and Eugenie Bondurant: Talented and tireless advocates for St. Petersburg and its cultural revolution. 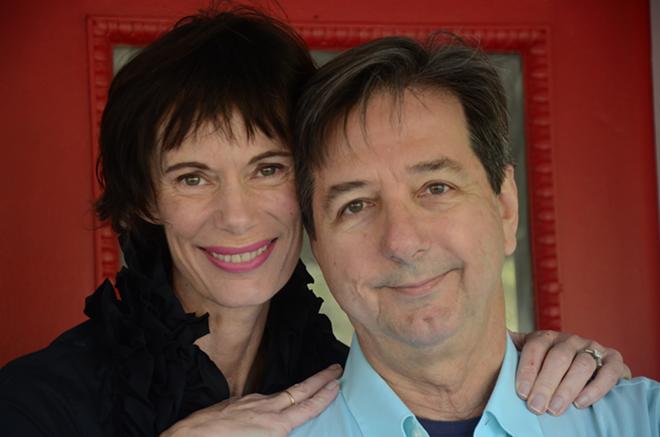 Cathy Salustri
Says Paul Wilborn of his wife, Eugenie Bondurant: "Before I met her, I spent a lot of time trying to find her. And it took up a lot of my creative time. When you’re happy — and your home life is happy — you’re able to achieve so much more. How much time do men waste trying to find their love? I’ve had a 15-year run of happiness that’s allowed me to be as creative as I want to be. And she came from that world — she understands it — so we don’t have any disputes about that. Which is nice."

Third in a series; read part one here, and part two here.

Paul Wilborn and Eugenie Bondurant have been watching St. Pete's cultural revolution from the front lines. The joint recipients of this year’s Muse Arts Ambassador Award are not only performers with active local profiles, they work behind the scenes — he as a writer and programmer, she as an acting teacher and voice talent — and tirelessly champion the contributions of each new arriving artist.

A former journalist with both the St. Petersburg Times and the Tampa Tribune, Wilborn, a bay area native, says St. Pete was primed from the start to have the across-the-bay artistic edge.

“Not only did the city have local wealthy people who were arts supporters,” he says, “but it had the benevolent corporate support of the Times. Locally owned. Unlike the Tribune, which was part of a chain.”

There were, he insists, more tangible aspects, “like the beauty of this town, as a resort town; what made it sleepy also turned out to make it cool. That’s what attracts talent. There was no law passed, no ordinances done. They’ve helped — but really, talented people are choosing to come to this place.”

He was working for the Associated Press in Los Angeles when he met Bondurant, a tall drink of water whose elfin, exotic beauty had landed her prestigious gigs as a runway model. She was an actor, too, who’d appeared in several films and had a nice gig as an L.A. drama teacher.

“I was already half packed to move back to New Orleans when I met Paul,” Bondurant says. “That’s my hometown, Louisiana has a film industry … and Paul just cut me off at the pass and said ‘Hey! How about we get married and move to Tampa? It’s only an hour and change flight to New Orleans.’”

Tampa mayor Pam Iorio had offered Wilborn a job as the city’s “Creative Industries Manager” — shorthand for “Let’s give this town the cultural profile it’s never had” — so they hitched up and relocated. That was 2003.

“I felt competitiveness among the arts groups,” Wilborn says. “A lot of griping.” After five years of spinning his wheels and getting nowhere, he leapt across the bay to become the executive director of St. Petersburg’s Palladium Theatre.

And his wife fell in love — for a second time.

“St. Petersburg,” Bondurant enthuses, “is Shangri-La. We live half a block from the water. I’m a mile away from downtown. We ride our bikes to downtown. We’re far enough away, and we’re close enough. Within arm’s reach.”

She teaches acting at Tampa’s Patel Conservatory, and at Andi Matheny’s Acting Studio in St. Pete. Matheny, also a film and TV actress, is a relatively new arrival to the area. Her husband is Gifted screenwriter Tom Flynn.

“This is a perfect example of what’s going on here,” Bondurant says. “She starts teaching, they find this building — it was an old garage, which they bought and renovated — and now she’s got a little black box theater in there. There are plays, they do improv, there are workshops and there are classes. And it’s thriving.”

Wilborn and Bondurant keep fingers in a bakery-window-ful of creative pies. Together, they sing the Great American Songbook and more in a long-running, classy cabaret series (Wilborn is also a talented jazz pianist); hers is the voice heard on the audio tours at the Dali Museum and on the St. Petersburg Arts Alliance’s Mural Walk; they were part of the team that kick-started the Radio Theatre Project at The [email protected]

“It’s fun to have contemporaries who challenge you,” says Wilborn. “I’m in a writing group where I don’t even think I’m the best writer. And I’m around musicians who are way better than me.”

Bondurant: “We have so many incredibly talented actors that no one knows. They know them when they’re onstage, but we also have SAG (Screen Actors Guild) actors that not very many people realize produce work here. People that fly off to different locations, and are working constantly.”

After appearing in a major role in 2015’s The Hunger Games: Mockingjay Part 2, Bondurant acted on an episode of NCIS: New Orleans, and has a new project coming up. She still auditions. “If I get the call, I’m going,” she says with a smile.

Wilborn playfully picks up where his wife left off. Cathy Salustri
Meet the newest addition to the St. Pete arts scene: Paul and Eugenie's kitten. We're assuming she'll grow into a jazz pianist who sings like a boss and then writes in hip coffee shops. No pressure, kitty!

Bill DeYoung was born in St. Pete and spent the first 22 years of his life here. After a long time as an arts and entertainment journalist at newspapers around Florida (plus one in Savannah, Ga.) he returned to his hometown in 2014.You’ll find his liner notes in more than 100 CDs by a wide range of artists including...
Scroll to read more Local Arts articles