The officer made the joke about Anne Frank, one of the most well known victims of the Holocaust, inside the home of a Jewish resident. 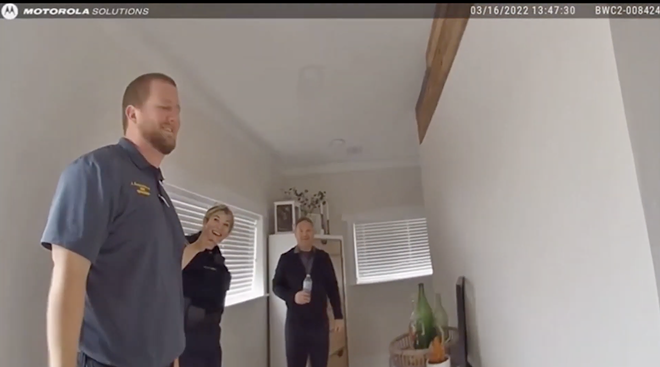 A Jewish resident of New Port Richey, who has been critical of the city and local law enforcement, says she feels targeted after police body camera video shows an officer making a Holocaust joke while inspecting her home.

"It's like Anne Frank," the police officer who is wearing the body camera whispers.

Anne Frank is a Dutch-Jewish diarist who was captured during the Holocaust. Before she died in a concentration camp at 16, she hid in an attic while writing her now world renowned work, "The Diary of a Young Girl" also known as "The Diary of Anne Frank."

In the video, a code enforcement officer's eyes get wide at the joke as he turns away, while NPRPD Corporal Karen Norris laughs and points at the officer.

"Did you hear what he said?" Norris says to others in the room.

The police officer repeats it again, just to be sure Norris heard it.

Corporal Norris laughs and puts her head in her hands after the joke is made the second time. The police officer who made the joke then says he'd like to tear the alleged addition in the house down.

"Can I take the drywall down? I have to know what's up there now," the officer says.

The police were inside the house of Michelle Wojciechowski, who is of Polish Jewish descent.

During the rise of Nazism, Wojciechowski says her ancestors immigrated from Russia and Poland to the United States. They left behind their homes, and several of their family members didn’t survive.

"The statements and body actions made by the officers in this video are an alarming reality of the accepted ignorance and callous disregard for life that we are facing today," Wojciechowski told CL.

She said that she requested a police report for the incident and was denied by Lieutenant Joseph Pascalli of NPRPD.

“He and chief Kim Bogart would later only accept a citizen complaint form in which they claim to have reviewed the body camera footage and found no improper conduct,” said Wojciechowski.

Wojciechowski also claims that she had no knowledge that the police and code enforcement would show up to her house that day, and that the city brought a locksmith to let them into her home when no one was there.

She believes NPRPD may have violated multiple state laws, especially under Chapter 933, which specifically requires that consent to enter the house must be sought and refused. The law also says a person’s private dwelling should not be entered by police without consent unless there is a provable serious threat to health and safety, or if a serious crime such as drug trafficking is going on.

None of that was happening in her house, Wojciechowski says, and she believes her constitutional right to privacy was also violated under the Fourth Amendment, which prohibits unreasonable searches.

While the police actions that day make her deeply upset, she feels it could’ve been even worse. "I feel that if one thing had been different on the day the police came to my house, maybe I would not be here to speak about it," Wojciechowski says.

She says that she is now facing charges for alleged code violations and has obtained a lawyer, but did not elaborate further. Pasco County court records show five code violations waged against her by the city.

Wojciechowski is a supporter of social justice causes in the area, including the local BLM movement, according to her Tik Tok account. She also has had signs in her front yard criticizing NPRPD and local government. For these reasons, Wojciechowski says she feels she's being targeted.

Creative Loafing Tampa Bay reached out to several members of the City of New Port Richey Government, including Police Chief Kim Bogart, Mayor Rob Marlowe, and City Manager Debbie Manns. CL asked for the identity of the officer that made the jokes, along with other questions, which have not been responded to.

Wojciechowski and other sources living in New Port Richey told CL that they believe they know the identity of the cop who made the joke but have yet to confirm.

When NPRPD got body cameras in 2020, Corporal Norris, who laughed at the Holocaust joke, told Bay News 9, "I’ve wanted them forever. Honesty, I feel it will be good for our officers to be able to show that we are doing the right thing."

It’s unclear yet if any action will be taken by the city, but this story will be updated with any new information.

"It's disgusting, it's unacceptable," Cox told council. "It is 2022, there are actual Nazis marching in the streets of Tampa, and we've got this nonsense going on with your police officers, it's gross."

This disturbing incident is just one of many for NPRPD.

Earlier this year the department tried, unsuccessfully, to put innocent BLM activist Marlowe Jones in jail for battery on a law enforcement officer—despite there being no evidence of him committing a crime. City Manager Debbie Manns texted that she was “not happy” when Jones was found innocent of charges fabricated by NPRPD.

During the George Floyd uprising, NPRPD officers participated in a prayer circle with members of the SPLC-designated hate group “The Proud Boys.” An NPRPD officer was fired after leaking department information to an armed right-wing vigilante, and another officer was caught posing in front of a confederate flag.

Meanwhile, the police department charged BLM protesters with noise violations and fines for using megaphones. After community outcry, those charges were later dropped.

Across Florida and in Tampa Bay, fascism is on the rise. On July 23, during the Turning Point USA convention in Tampa, multiple Nazi groups arrived to spread propaganda.

And just last week, the Florida Holocaust Museum condemned the spreading of Nazi propaganda flyers in St. Petersburg in a press release statement.

Meanwhile, Wojciechowski has to reckon with her local police officers invading her home and making jokes about the Holocaust.

She hopes that the continued unsettling behavior of NPRPD will lead to accountability.

“To what laws do our officers swear to uphold?” She questioned. “Because it doesn’t appear to be the constitution, nor does it appear to be state law.”