The demand to remove the statue is decades old. 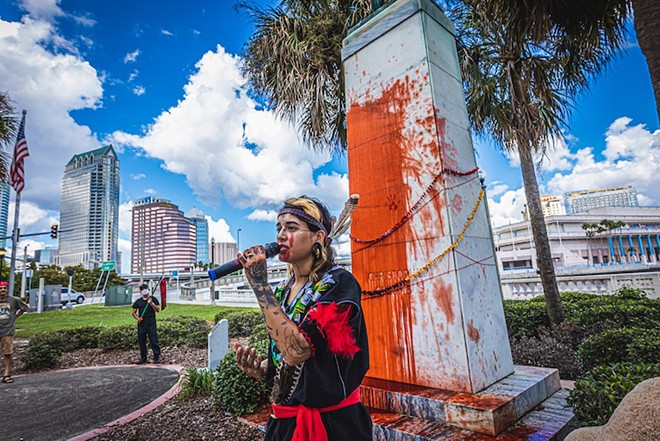 In the lead-up to Christopher Columbus Day on Oct. 10, local Indigenous groups have told City of Tampa officials to remove a Columbus statue from the park dedicated to him on Bayshore Boulevard and W Platt Street. But even if the city refuses to remove it, the group says the statue will come down.

“One way, or another the statue of Columbus must and will be removed,” the Florida Indigenous Alliance and the Florida American Indian Movement wrote in a letter addressed to the city.

The groups want the statue removed and for the city to replace Columbus Day with Indigenous People’s Day. For Natives, Columbus represents slavery, rape, genocide, torture and other atrocities that he and his companions described in their own words and in their diaries.

In the letter addressed to the city, the groups point out that Columbus even did horrific things to Native infants.

“Dominican Friar Bartolome De Las Casas recorded that Columbus hung Native people in rows of thirteen to honor Christ and his disciples, and further that Columbus had his men feed Native infants to dogs,” the letter reads.

FIA wrote in a statement last year that if Germany had statues of Adolf Hitler, there would be uproar, yet Tampa keeps its statue of Columbus. 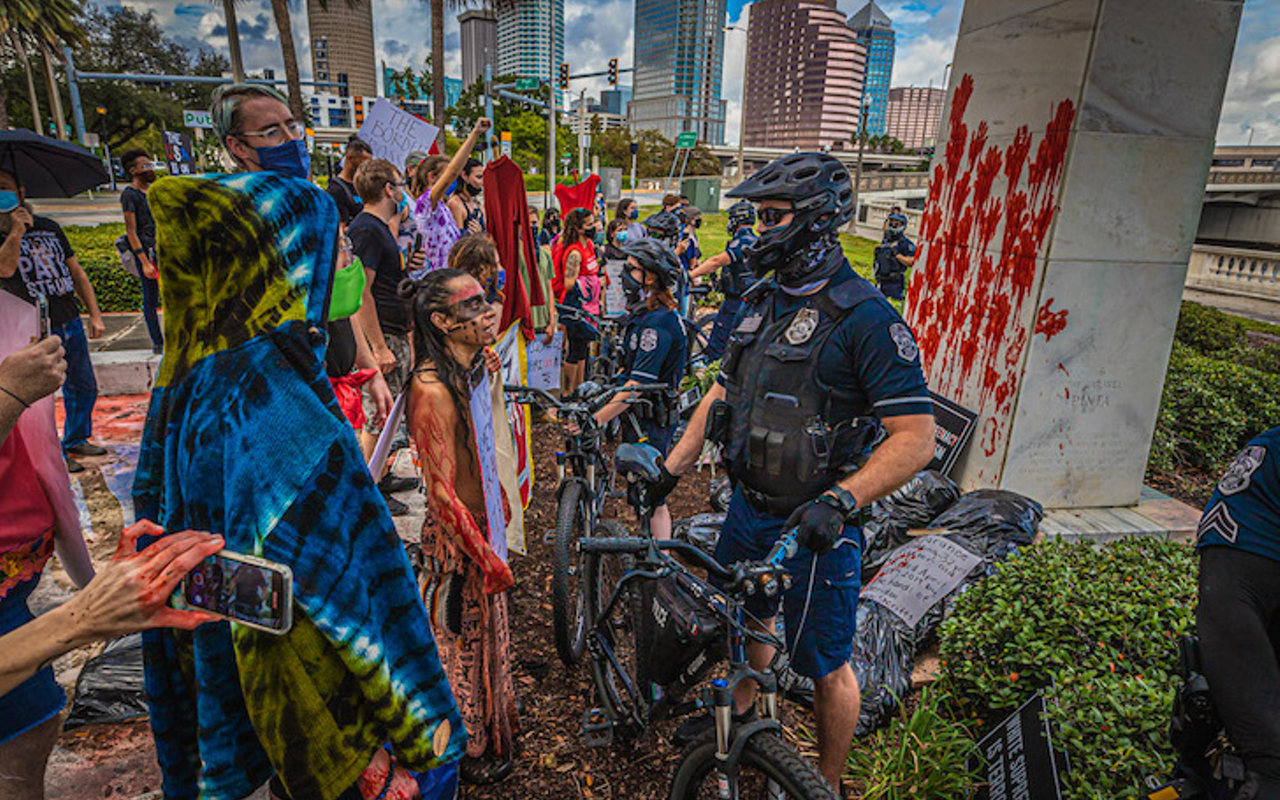 Another outstanding issue with America’s celebration of Columbus is that he didn't discover America. He was lost and stumbled upon what is now known as the Caribbean, where he launched his campaign of brutality.

The demand to remove Tampa’s Columbus statue and to stop the glorification of genocide is decades old.

FIA says that Native Americans first asked for the statue to be removed in 1991, and spoke before council about the inhumanity that Columbus represents. But in the ensuing 31 years, the Indigenous people have only been met with resistance from the city. At a protest against the statue two years ago, Tampa Police Department officers surrounded the statue to protect it after it was covered in fake blood.

And leading up to that protest, TPD officers used taxpayer money to guard the statue morning and night after it had been tagged “BLM” and other messages during the George Floyd uprising. Last year, protesters once again protested the statue and covered it in fake blood, but this time no police arrived. Meanwhile in other cities, statues of Columbus have been removed and leaders have replaced Columbus Day with Indigenous Peoples Day to honor the people who first inhabited this land.

In 2021, Governor Ron DeSantis passed a law making it a felony for protestors to tear down or damage historical statutes, which would include Columbus statues and confederate monuments. But the law doesn’t stop a city from being able to move statues.

And a local historian says that it is confusing as to why the statue is there in the first place.

Rodney Kite-Powell, curator at the Tampa Bay History Center, explained that in the early ‘50s, Bayshore was undergoing a major beautification process as the Columbus statue was put up. But he said it doesn’t add up that the statue was put on Bayshore in the first place.

“Originally, you had to leave Bayshore to get downtown, and I think around that time they completed what was called Little Bayshore, and [the statue] was tied to that beautification effort,” Kite-Powell said. “But a lot of the money was raised by residents of Ybor City for the statue, so it is strange that it wasn’t put in Ybor. It would’ve made more sense.”

There’s also precedent in the area for municipalities recognizing when monuments are wrong and making it right.

In 2018, after public outcry, a confederate monument was moved from Downtown Tampa to a cemetery, which appeased the public. And in 2019 St. Petersburg removed its Christopher Columbus statue from its downtown.

The movement to tell the real history of Indigenous people has made it to the federal level, too. Last year, President Joe Biden issued a proclamation acknowledging Indignenous People’s Day.

“We must never forget the centuries-long campaign of violence, displacement, assimilation, and terror wrought upon Native communities and Tribal Nations throughout our country,” Biden wrote.

He pointed out that Native people still suffer in America, with COVID-19 affecting Indigenous people “at an alarming and disproportionate rate.”

FIA says that Columbus’ horrific and inhumane treatment of Indigenous Peoples endures today in America as Native women are raped and murdered near camps full of men that are established for fracking operations.

And recently, thousands of Native children have been discovered in mass graves in Canada, and many are being uncovered in the United States. The children were brutalized and killed in concentration camps called “residential boarding schools” from the mid 1800s until the late 1970s.

FIA said that part of ending celebrating genocide is removing monuments to the subjugation and genocide of Indigenous people. The group pointed out that in other cities, when people’s patience has run out, they’ve taken matters into their own hands and torn down Columbus statues. But the group says it hopes the City of Tampa will hear the voice of Natives and make things right before it has to reach that point.

“We again, in the spirit of cooperation and dialogue, call upon the City of Tampa to do the right thing,” FIA wrote.

City of Tampa Communications officials Adam Smith and Lauren Rozyla did not respond to a request for comment for this story. No member of Tampa City Council has responded either. This post will be updated if responses come in.

Last year, councilman Bill Carlson, who represents District 4 where the statue resides, told CL he looked into courses of action for the statue, including moving it to a more appropriate location.

“I had a conversation with the Mayor [Jane Castor] about options for what to do with the statue,” Carlson said. “It’s the mayor’s decision on what happens next.”

The full letter can be found here: