Dozens of boys died and were buried in unmarked graves at the 1,400-acre campus. 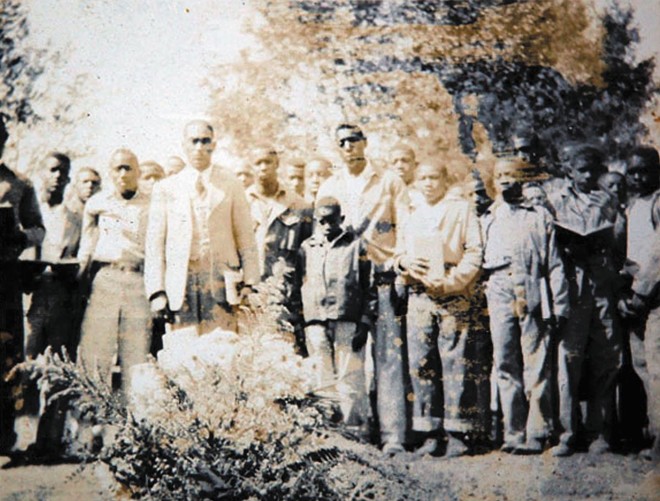 c/o Harper Collins
A memorial service at Boot Hill in the 1950s. The only documented death and burial after 1950 inthe school’s records was Billey Jackson’s, in 1952. Witnesses who attended Jackson’s funeral did notrecognize the people in this photo or recall a service of this size. They also said there were two otherburials at Boot Hill circa 1951–52, thus contradicting the official record.
For more than a century, a state-run reform school in the Florida panhandle was the site of horrific abuse of children. Dozens of boys died and were buried in unmarked graves at the 1,400-acre campus in Marianna.

The school was shuttered in 2011, and from 2012 to 2016, forensic anthropologist Dr. Erin Kimmerle at the University of South Florida led a team of students, scientists, and law enforcement, in a project to find, exhume, and identify any undocumented graves at the Arthur G. Dozier School for Boys.

They found 55 burials that had no recorded information in state-issued plot maps or other documents.

A decade after the start of this literal groundbreaking investigation, Kimmerle wrote an account of her experiences with Dozier titled “We Carry Their Bones: The Search for Justice at the Dozier School for Boys.”

“It was a challenge because there’s so much history,” Kimmerle said.

“And it’s so intertwined in Florida history and civil rights history…and so many people involved. How do you tell that story…and how could I tell this story and reach the broadest audience possible? That was the goal.”

'We Carry Their Bones' book launch

The story of Dozier, the boys buried there and the men who now carry a lifetime of scars has been highly publicized in Florida and around the world. That includes the 2009 series of articles by Ben Montgomery and Waveney Ann Moore of the Tampa Bay Times—a Pulitzer Prize finalist in 2010—and countless articles and TV pieces by outlets around the state.

But Kimmerle’s book offers a unique perspective from the woman who had her hands in the north Florida clay, from which she and her team gently unearthed child-sized bones waiting decades to be identified. “When people were opposing the work, they would say, ‘You just want to excavate these remains,’” she said. “But it’s not what I want, I’m advocating for what the families want. It’s about trying to be a voice and make their voices heard.”

Though a world-renowned forensics expert, Kimmerle’s book is more narrative nonfiction than academic report. It charts her personal and professional journey to help bring even the smallest bit of closure to families and survivors wracked by grief and trauma for decades.

“It was such a long project; I got to know so many people—the White House Boys, journalists, so many people involved,” Kimmerle said. “It does start to feel personal.”

“In the forensics works…it’s always, for me, been very family-focused,” she said. “We do this work for the living. This is really about the survivors and the living people.”

“We Carry Their Bones” is a poignant examination of Kimmerle’s work and the challenges she and her team faced. It points a spotlight on some of the infuriating and absurd excuses and obstacles she faced from authorities in Marianna, Jackson County and the state of Florida.

“The attitude that we encountered like, ‘This can’t be done; it shouldn’t be done; let the sleeping dogs lie,’” she said. “That was the biggest disappointment and frustration because it’s so much within our capacity. This was about the will to do it, not our ability to do it.”

The book also examines the unsurprising pushback she and her team received from locals who had lived and worked in the small panhandle community for generations. Kimmerle wrote that some of the longtime residents worked at Dozier, had family and friends who had worked there, or were proud of the supposed “good work” and jobs the school brought to the area.

She wrote of residents, leaders and even local journalists dedicated to maintaining the manicured narrative, refuting the many allegations of abuse. Kimmerle questioned, “Why do we have to keep trying to convince people to do what’s right and definitely within our ability to do it?”

“I think you see this a lot in different civil rights cases. It’s the same thing: suddenly the door closes,” she said. “For me it was the frustration and then the motivation. Hopefully that comes through in telling this story.”

Kimmerle wrote in her book:

“Anytime there’s an effort at truth and reconciliation in a small town where the bright light of publicity shines on some dark deed, the powerful people in town try to control their truth—or at least the thing that’s true to them.”

Part of Kimmerle’s work included searching for any records about the history of the school, which had been named the Florida State Reform School, the Florida Industrial School for Boys, the Florida School for Boys and finally the Arthur G. Dozier School for Boys. When she met with an archivist in Marianna, Kimmerle wrote that she was “sharply corrected” in her use of the word children to describe those who were buried at the school.

“They were inmates. Not children,” the archivist said, who also called the boys “throwaways.”

The boys sent to the school had been as young as 5.

“Throwaway children. That was the phrase used in the FDLE report. Whose narrative is this? I wondered. For the record: I do not believe we throw away children.”

c/o Harper Collins
"Last day of excavation, and I was glad this phase was done. I had no idea then that there was much more work to be done. I’d spend several more years working on the project."
Like the years-long forensics work and calls for justice by hundreds of Dozier school survivors and families, Kimmerle’s book explores several issues at play.

There were families of boys sent to the school who never knew where their brother, son, uncle was buried. Kimmerle and her team helped many get closure by identifying exhumed remains via DNA analysis. There are also groups of men who survived the school—named the White House Boys and the Black Boys of Dozier. To Kimmerle and others, they recounted the horrors inflicted on them: bloody beatings in the “White House,” Black boys suffering solitary confinement in sweat boxes, being forced to dig graves and bury their bunkmates and time spent in a dank basement they called the “rape room.”

These boys, now men in their 70s and 80s, many of whom have died in recent years, sought apologies and reparations.

An appendix in Kimmerle’s book lists the names of 46 boys and men that the team was able to positively and presumptively identify in the Boot Hill burial ground. Their work also provided circumstances for many of the boys’ deaths—the 1914 dormitory fire, “reported flu,” “accident,” blunt trauma and knife wounds.

At least 21 remains of boys were given to their families for reburial. Some, like many from the 1914 fire, were reburied in their original unmarked graves. Kimmerle wrote there were several graves containing commingled remains, which made it impossible to determine who was buried there.

The state of Florida agreed to pay burial costs to the families to reinter their loved ones. In 2017, the state formally apologized in a ceremony acknowledging the abuse at Dozier.

“I don’t know that many of the men—the White House Boys and the Black Boys of Dozier—I don’t know collectively that they felt like it was enough,” Kimmerle said. “The acknowledgement from the state was very important…but in order for people to feel a sense of change, there has to be something a lot more transformative.”

Kimmerle’s work and her book is arguably a large part of that transformation. Despite the pushback, obstacles, objections, the many closed doors, the lack of records and all the “reasons provided that we would fail, we did not fail.”

“Hopefully it’ll be a good tribute to the families, all the people involved, the volunteers—I couldn’t name them all or include all their stories,” Kimmerle said. “Hopefully it reflects well on what we did.”

Freelance contributor Chelsea Zukowski is a Tampa Bay native who started her journalism career in 2014 at the Tampa Bay Times, working her way up from editorial assistant to entertainment reporter and copy editor. After four years in print, she moved on to broadcast as a digital producer with 10 Tampa Bay-WTSP,...
More
Scroll to read more Florida News articles
Join the Creative Loafing Tampa Bay Press Club